3 min read
Add comment
FacebookTwitterRedditPinterestEmail
The fourth game produced by Nintendo indie developer RCMADIAX comes in the form of Pixel Slime U - an auto-scrolling platformer that challenges the player to make it through 40 levels with as few deaths as possible.

The fourth game produced by Nintendo indie developer RCMADIAX comes in the form of Pixel Slime U – an auto-scrolling platformer that challenges the player to make it through 40 levels with as few deaths as possible.

The goal of the game is to get the green Slime character across small levels while avoiding spikes and pitfalls in order to reach the goal.  Pixel Slime U tries to be make things simple and addicting by having the character move on its own and reducing controls to just 1 button (starting to sound like their previous title: Don’t Crash). The command button will cause the slime to either jump to the next platform or invert to the other side depending on what the level calls for.

The game keeps track of how many deaths that you get along the way with the lowest score possible as the ultimate goal. Much like Super Meat Boy, the game instantly restarts after a death; an attempt to balance the game’s rigorous demand for perfect timing. I will say that some portions of the game are almost too strict with really small room for error. Stages feature many gimmicks from changes in gravity and rotating screens that require the right timing to get through. There are some creative level designs, but by the half-way point, many levels seems to just be recycled with a few add-ons for difficulty.

The game also features a saving feature but lacks a formal leaderboard. The game encourages competitive posting a screenshot of one’s score on MiiVerse. 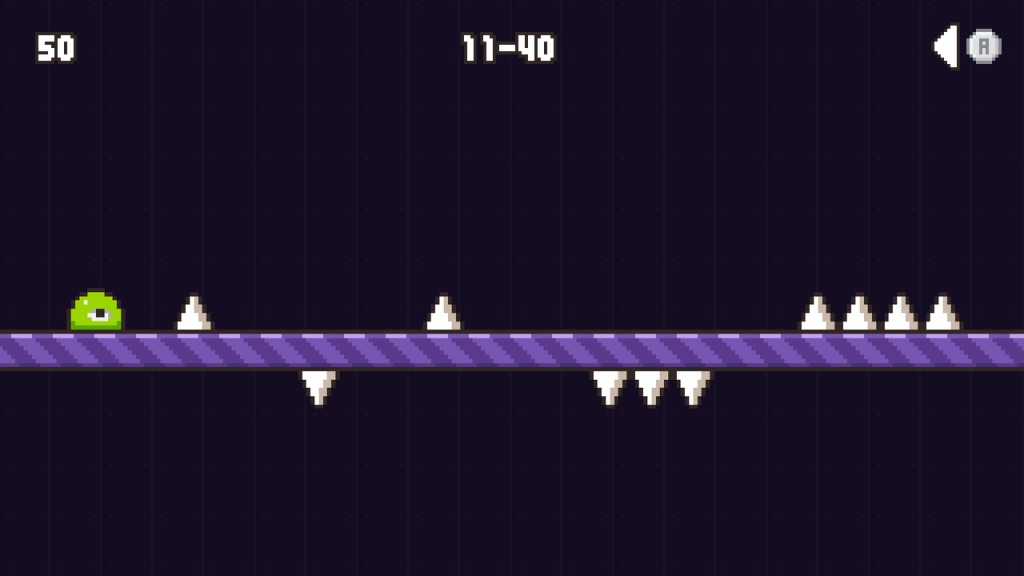 The game only supports the use of the Wii U gamepad. The only control is the B button. The game supports off-TV play.

Like many indie games of late, Pixel Slime U goes for an 8-bit art style. While the game’s use of a limited color scheme is very retro, there is a lot of empty space in each level consisting of a universal blank black background. Praise should be given for the use of dynamic camera effects in order to shake things up.

The game features only one theme that is pretty catchy but gets to be repetitive after a while. On the bright side, the game has a option to turn off sound on the title screen. 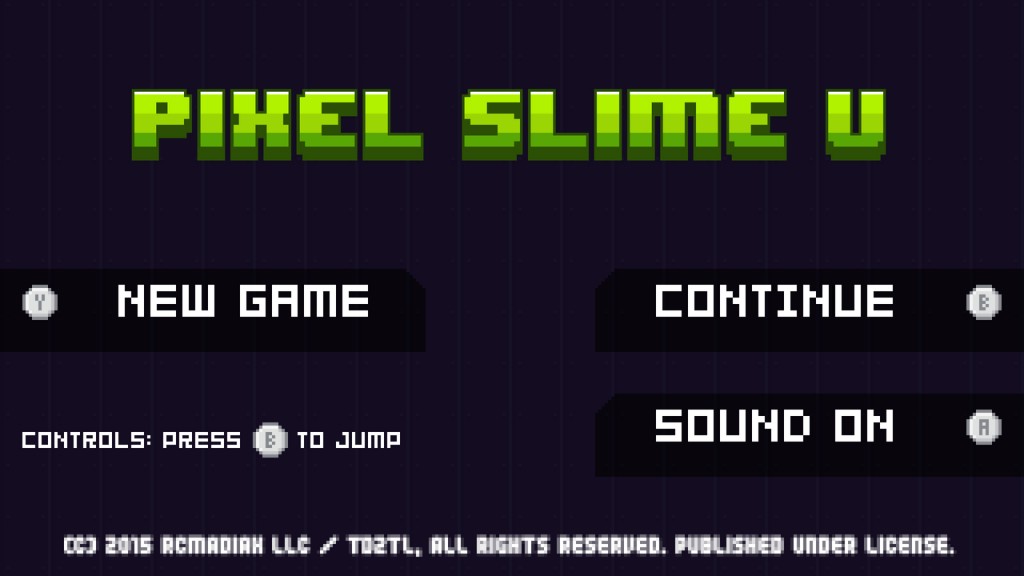 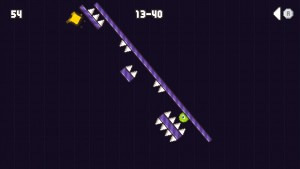 Pixel Slime U does earn merit by having a clear goal in mind and an addictive gameplay. However, the game suffers from a lack of depth in presentation and a very frustrating . Having 40 levels makes a play-through take a while and may become too daunting for those who can’t get the feel for tougher levels. Also, having a smaller number of levels would keep things from getting stale after a while. Despite what it may be lacking, the game is certainly more wholesome than previous RCMADIAX titles and feels more like an arcade game instead of a mini game.