2 min read
1 comment
FacebookTwitterRedditPinterestEmail
This April, The Avengers and the X-Men—the two most popular franchises in comics history—go to war! 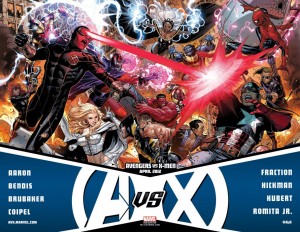 Avengers vs X-Men is written by a team of the top-selling authors in the comic book industry today: Brian Michael Bendis, Jason Aaron, Jonathan Hickman, Ed Brubaker and Matt Fraction. This unprecedented assembly of acclaimed writers is joined by a trio of the industry’s superstar artists: John Romita Jr., Olivier Coipel and Adam Kubert. The Avengers and X-Men have learned that the all-powerful embodiment of both death and rebirth known as the Phoenix Force is on a crash course for Earth…and it needs a new host to unleash its immeasurable power. But what is the shocking decision tied to the Phoenix’s return that will pit the Avengers against the X-Men? And when good friends become bitter enemies, what does this mean for the future of the Marvel Universe?

“Avengers vs X-Men brings together the most powerful forces in comics for a super hero war like you’ve never seen before and will never see again. We all want to see the best of the best go against each other—Lakers & Celtics; Ali & Frazier; Yankees & Red Sox; and in comics it’s the Avengers fighting the X-Men, ” said Axel Alonso, Editor in Chief, Marvel Entertainment. “We’ve brought together the biggest writers, biggest artists and biggest characters for the biggest story we’ve ever told. This is the kind of high-octane action-packed story that fans demand while also having a profound effect on every character involved—and reshaping the Marvel Universe in its wake.”

You’ve heard It’s Coming—and this April the War Is Here in Avengers vs X-Men #1! All your favorite super heroes enter—and only one team will emerge victorious!