Star Trek: The Next Generation finally coming to Blu-ray

2 min read
Add comment
FacebookTwitterRedditPinterestEmail
Star Trek: The Next Generation will be released in high-definition Blu-ray starting in 2012.

Star Trek: The Next Generation will be released in high-definition Blu-ray, starting in January with a sampler of several popular episodes, followed by a season-one set to be released later on in 2012, and subsequent seasons beaming down after that. Each of the 178 episodes spanning The Next Generation‘s seven seasons will be transferred to true high-definition 1080p for release in the Blu-ray format and, eventually, for runs on television and digital platforms in the U.S. and across the world. Star Trek: The Next Generation will, as fans know, be celebrating its 25th anniversary in 2012. 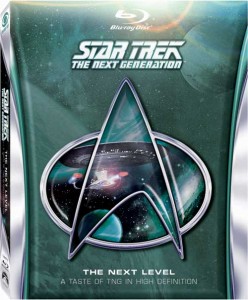 “Fans have been clamoring for a high-definition release of Star Trek: The Next Generation,” Ken Ross, Executive Vice President and General Manager of CBS Entertainment, said in a statement. “Transferring the series to high-definition presented difficult technical challenges, but our team has come up with a process to create true 1080p HD masters with true HD visual effects. We can’t wait to show fans how pristine the series looks and sounds with our upcoming Blu-ray releases.”

CBS is, in fact, returning to the original film negatives, a mother lode of material encompassing 25,000-plus reels of footage, and editing the episodes together precisely as they were when they originally aired between 1987 and 1994. Visual effects will not be upconverted from videotape, but instead will be recompositioned. The freshly cut film will ultimately be transferred to high definition with 7.1 DTS Master Audio. And all of the work is being done in conjunction with respected, longtime Star Trek figures Denise and Michael Okuda, who are on board as consultants.

As for that sampler, it will be called Star Trek: The Next Generation – The Next Level. CBS Home Entertainment has set a January 31, 2012, release date for the single disc, which will include the feature-length version of the series pilot, “Encounter at Farpoint,” as well as the fan-favorite episodes “Sins of the Father” and “The Inner Light,” the former from season three and the latter from season five. The Next Level will sell for the suggested retail price of $21.99.

This edition of the Geek News Brief includes stories about Marvel's Spider-Man 2 and Marvel's Wolverine video game announcements, additions to the...