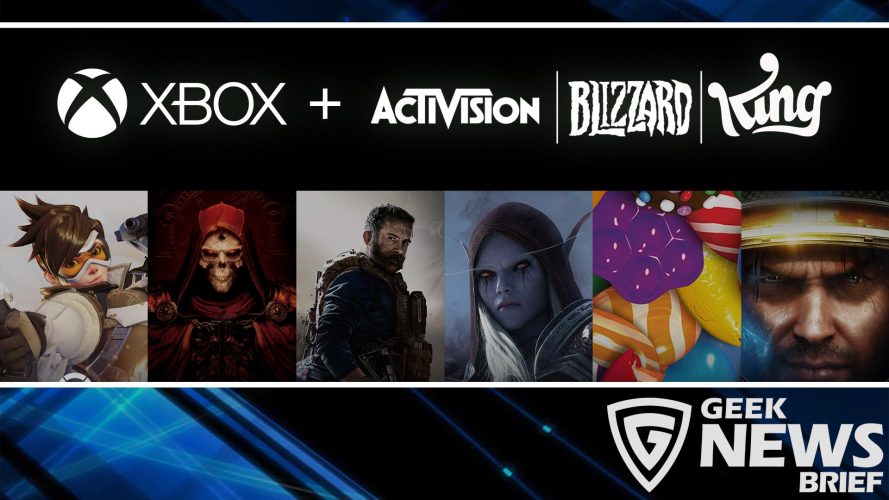 Microsoft has announced plans to acquire Activision Blizzard for a price of $68.7 billion. The deal would make the combined entity the third-largest game company by revenue and would put titles like Call of Duty, World of Warcraft, and Candy Crush under their umbrella. Part of the deal includes plans by Microsoft to add Activision Blizzard games to Game Pass.

The buyout is expected to close no later than June 2023 if regulators and Activision Blizzard shareholders greenlight the move. The board of directors for both companies have already approved the deal.

The Cuphead Show to premiere on Netflix on February 18th

Netflix has revealed that The Cuphead Show will premiere on February 18th, along with debuting a brand-new trailer. Fans of the game will quickly recognize the 1930’s-influenced art style and the cast of characters for the 12-episode series.

The show is described as a character-driven comedy series following the unique misadventures of the lovable, impulsive scamp Cuphead and his cautious but easily-swayed brother Mugman.

The voice cast includes acting veterans Tru Valentino and Frank Todaro as Cuphead and Mugman, with Wayne Brady in the role of King Dice.

Star Trek: Discovery has been renewed for a fifth season. Season 4 will return with new episodes on Thursday, February 10th.

Season two of Star Trek: Picard will premiere on Thursday, March 3rd and a third season in currently in production.

Star Trek: Strange New Worlds has been renewed for a second season ahead of its first season debut, which will premiere on Thursday, May 5th.

Star Trek: Lower Decks will return in Summer 2022 with a 10-episode third season, and has also been renewed for a fourth season.

Star Trek: Prodigy will conclude the first half of its first season on February 3rd, with the second half of season one available starting later in 2022.

Amazon’s Lord of the Rings show gets a title

Showrunners J.D. Payne & Patrick McKay said in a statement, “This is a title that we imagine could live on the spine of a book next to J.R.R. Tolkien’s other classics. The Rings of Power unites all the major stories of Middle-earth’s Second Age: the forging of the rings, the rise of the Dark Lord Sauron, the epic tale of Numenor and the Last Alliance of Elves and Men. Until now, audiences have only seen onscreen the story of the One Ring – but before there was one, there were many… and we’re excited to share the epic story of them all.”

Spider-Man: Across the Spider-Verse will change art styles in each dimension

In an interview with Collider, Chris Miller and Phil Lord discussed the visual changes that we’ll be seeing in Across the Spider-Verse.

Miller said, “The idea that we’d be going to different dimensions really opened up an opportunity artistically to have each world have its own art style, and to be able to push the folks at ImageWorks to develop a way to have each dimension feel like it was drawn by a different artist’s hand. Seeing the development of that stuff is breathtaking, and really, it’s the reason we keep doing it, because it’s so hard to get it right.”

Lord added that their goal is always to push animation in directions it hasn’t gone yet on every project.

The CW developing Justice U for David Ramsey

Justice U is a new series in development for The CW’s Arrowverse, with David Ramsey’s John Diggle set to lead the pack.

In the new series, after years of fighting alongside masked heroes, Diggle embarks on a new mission to recruit five young meta humans to live undercover as freshmen at a prestigious university. There he will oversee their education and train them to become the heroes of tomorrow.

In addition to starring in the series, if it is picked up to pilot, Ramsey will also direct.