2 min read
Add comment
FacebookTwitterRedditPinterestEmail
The movie is played as if it's real found footage and does it perfectly. 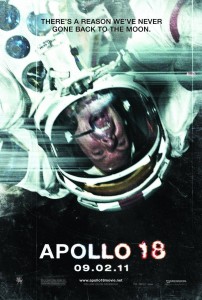 Synopsis via IMDB: “Decades-old found footage from NASA’s abandoned Apollo 18 mission, where two American astronauts were sent on a secret expedition, reveals the reason the U.S. has never returned to the moon.”

Final Thought: The movie is played as if it’s real found footage and does it perfectly. This is a film worth seeing. I’m excited to see if they do anything with a sequel or if this is building to something bigger in the future. Go see this movie!