5 min read
Add comment
FacebookTwitterRedditPinterestEmail
If you’re looking for a puzzle-focused platformer packed with puns, you’ll be perfectly at home in the cave networks of Batbarian.

Indie developer Unspeakable Pixels fills the cavernous depths of Batbarian: Testament of the Primordials to the brim with witty humor and dangerous traps. Their debut title provides a familiar, Metroidvania platforming experience peppered with colorful NPCs and simple yet challenging puzzles. What it lacks in complex combat it hopes to make up for through clever dialogue and a dimly-lit but wondrous environment.

In Batbarian you lead the (unintentional) charge into the shadowy underground alongside your glowing bat companion, Pip. The exact details of your adventure are not especially important, and you are instead catapulted directly into the action. In typical Metroidvania fashion, you are introduced to the winding caves and trials ahead of you through a brief series of tutorial challenges. The core conceit of many of your barbarian’s upcoming challenges is that your dimwitted deathbringer cannot see much in the depths of the earth. Pip, however, can! 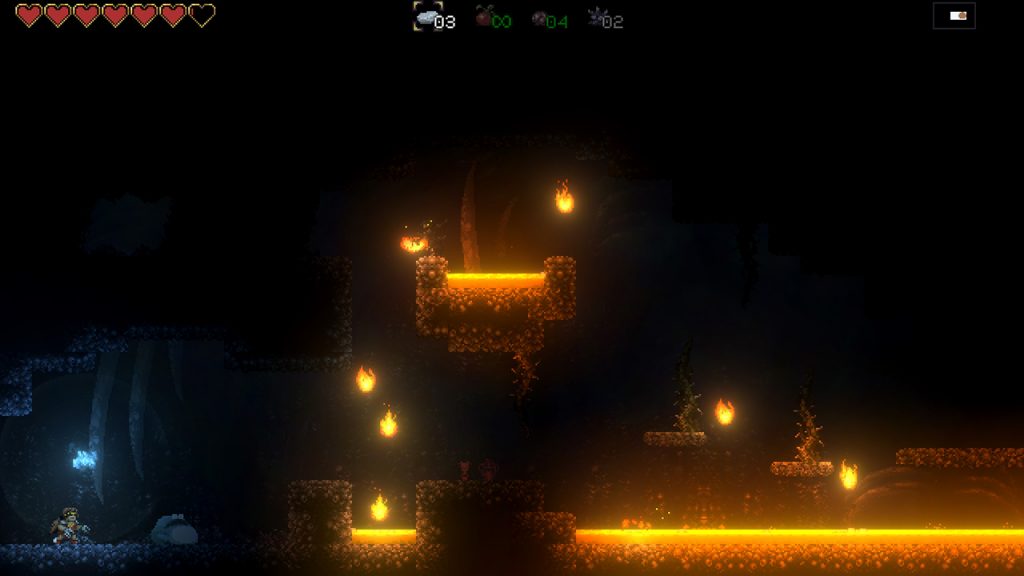 By slinging assorted fruits and pebbles from your satchel, you can guide Pip’s flight path to stun monsters, toggle switches, and light your way through the darkness. Manipulating Pip for puzzle solving purposes is Batbarian’s biggest strength, and it’s put to good use. As you progress, throwing fruit scales from aim-based tasks to deft moving targets and longer series of banked shots. While the puzzles themselves are technical and mental challenges, these fruit-throwing antics also highlight a major hiccup in the game’s execution: imprecision. I frequently found my warrior stuttering a few spaces too far and falling into a poison pool or pushing a block a smidge too hard. I was able to overcome the control issues over time, but this hurdle didn’t ever feel like an intentional game design choice.

As you delve into the caves and slay some deep-dwelling baddies, you gradually level up and earn bonuses to your attack, defense, and expansions to Pip’s illumination through a randomized slot machine mini-game. Hidden treasures add to your armory of abilities and open paths to new regions of the map through traditional platformer tools like dashes and double jumps. Additionally, you may find allies in the depths that need your help and are willing to offer new attacks to aid in your quest. 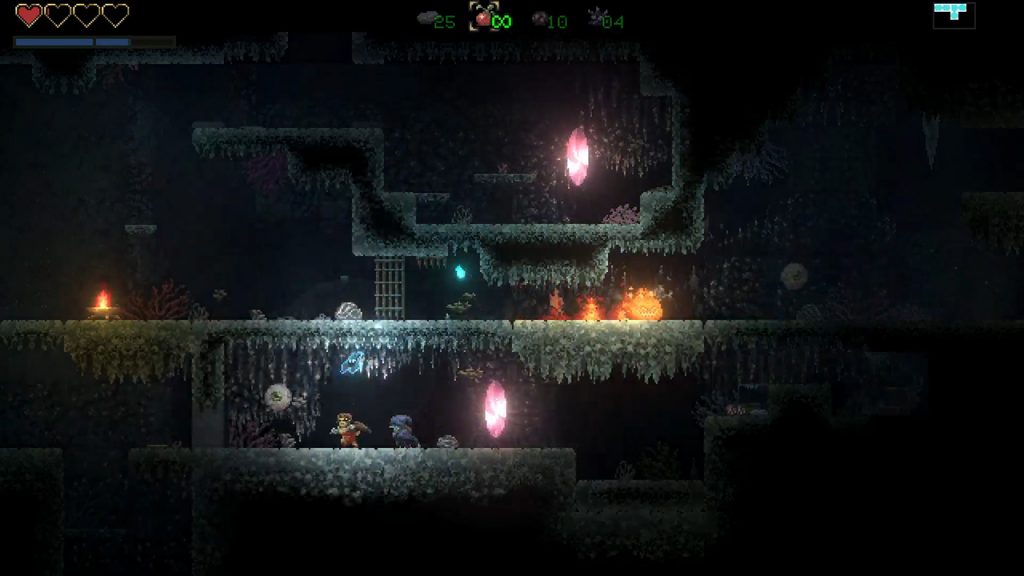 The people and monsters you meet along the way provide a plethora of gags and snappy dialogue. In both internal monologues and conversations alike, guiding your peerless adventurer through their journey offers countless one-liners and quips that contrast starkly with the silent denizens of the underground. Enemies and other NPCs that do speak are often just as sharp, and smaller bosses that don’t have their own lines still deliver expertly-timed comedic responses in their animations. While new followers and friends are fit to bursting with sarcasm and punchlines, even with their amped up skills, they do little to change how you fight the forces of evil.

The tongue-in-cheek dialogue carries Batbarian fairly far, and the 16-bit-era sounds and synthesizer-forward score create a familiar Metroidvania experience. The puzzles are a stone’s throw away from common platforming puzzle mechanics but are uniquely designed to provide a new level of depth and are distinct enough that they can stand on their own. The combat element of the adventure largely falls flat, however. Your frenzied fighter attacks with a single button throughout the game, and bosses that require more precise dashes or jumps are challenges based more on movement or an extension of Pip’s puzzle play rather than suave swordplay. Upgraded attacks and partners with their own attacks are nice bonuses, but they offer little variety to the combat experience in a genre that typically embraces multi-faceted boss battles. 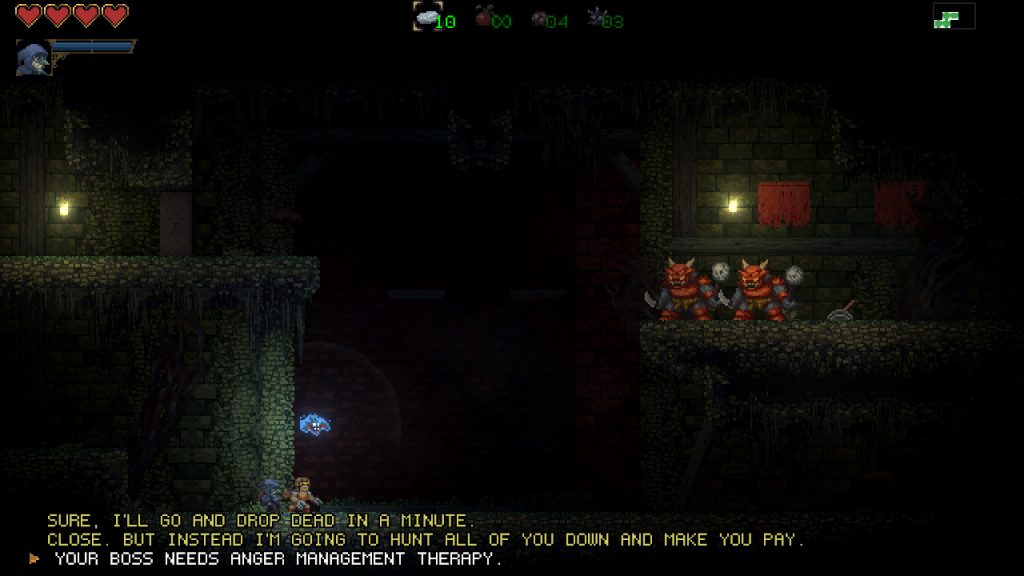 A lack of substantial growth in skills leaves the game to develop fairly slowly. More curious adventurers are frequently rewarded with gemstones and power potions, but these collectibles don’t manifest themselves in meaningful ways. Outside of completing my exploration, I didn’t feel compelled to keep up my search. If you’re looking for a puzzle-focused platformer packed with puns, you’ll be perfectly at home in the cave networks of Batbarian. If you’re in search of a lore-rich, monster slaying adventure, you may wish to take your bat and big sword elsewhere. The total experience is clearly a labor of love with new mechanics sliding seamlessly into a classic gaming genre, and I can’t wait to see what lessons are brought from Batbarian into Unspeakable Pixels’ next adventure.

+ Amazingly witty dialogue brings character interactions to life with snappy one-liners that actually made me laugh out loud
+ Gravity and timing-based puzzles combine to create engaging, tiered challenges
+ A subtle, but well-crafted score supports the eerie darkness of the underground
+ Using field of vision as a stat adds a greater sense of danger to the terror-filled tunnel system
+ Monsters and allies are both vibrant and wonderfully designed

– Controls are imprecise at times when precision is often needed most
– A lack of visual feedback can make seeing things difficult (even beyond the intentionally dimly-lit cave)
– Progression milestones don’t feel substantial
– For a game built around a barbarian, combat often feels weightless and more puzzle-driven than weapon-focused