7 min read
Add comment
FacebookTwitterRedditPinterestEmail
Glitches and bugs aside, and once properly tuned, Baldur’s Gate III will be a great digital version of a pen and paper roleplaying game.

Larian Studios, the team behind Divinity: Original Sin (DOS) and Divinity: Original Sin 2, have taken the world’s greatest role playing game under their wing. Though Larian’s style differs significantly from the first two games in the Baldur’s Gate series, Baldur’s Gate III is shaping up to be a masterful RPG inspired by the Dungeons & Dragons experience based on the Fifth Edition rules. The current Early Access version of the game is, as you would expect, far from complete, but it still provides an enormous, fulfilling RPG for old Baldur’s Gate fans, tabletop gamers, and CRPG fans alike.

That said, it is important to emphasize that this review is for the Early Access version of the game. It is riddled with bugs (like characters clipping through walls, interactable items becoming untouchable, frozen faces, rendering problems, etc.). For anyone interested in the game in its current state, it is important to address these issues up front. Glitches and bugs aside, however, once properly tuned, Baldur’s Gate III will be a great digital version of a pen and paper roleplaying game. 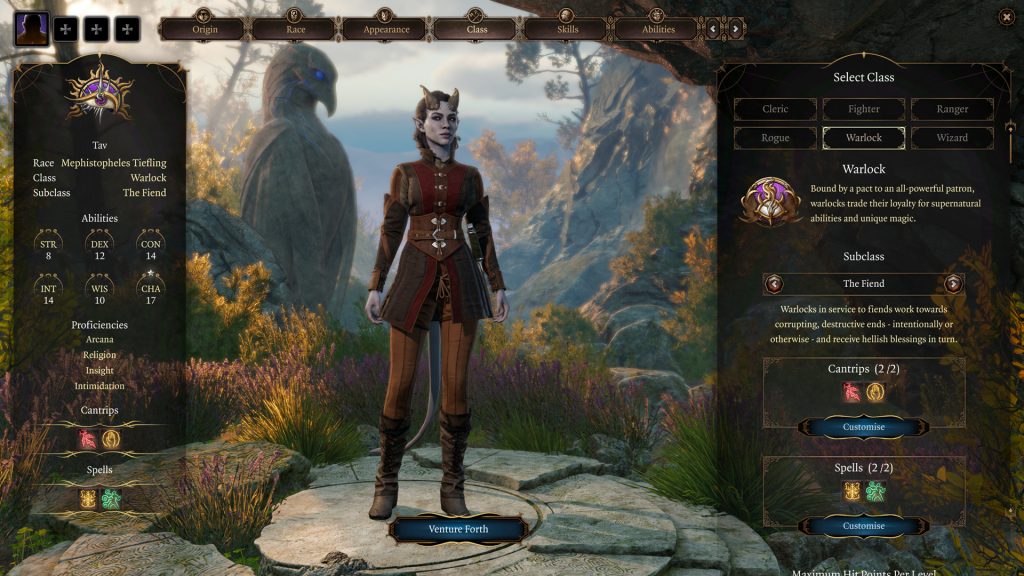 Your first foray into the world of Faerun (the larger continent on which the adventure takes place) is with a beautiful character builder. Although the community has opted to not use the full extent of its features, the game provides hundreds of customization options in its base races (ranging from Humans and Halflings to Tieflings and Githyanki) and classes (Clerics, Fighters, Rangers, Rogues, Wizards, and Warlocks). Though Larian has not included all of the default options from the D&D Player’s Handbook, the character creator is a stunning tool that plays a large role in how your character interacts with the world. My Drow Warlock, for example, is frequently regarded in kind by torture-fueled goblins and shunned by rival elves.

While character creation generally is a smooth and exciting process, for those not already familiar with building characters for D&D, there is little insight into how your class choice will shape up down the road. As Fifth Edition’s other 7 classes are introduced to the game and the choice becomes even more challenging, providing more information about each class’s future abilities will be a must.

Your nascent adventurer then emerges from a metal tube aboard a nautiloid, a dimension-hopping ship, driven by Illithids (also known as Mind Flayers), as they attempt to melt your brain and convert you into one of their own. You know, standard Dungeons & Dragons fair. You are immediately catapulted into an escape for your life and several combat encounters. Unlike previous installments in the franchise which ran on real-time combat, Baldur’s Gate III’s fights play out as turn-based encounters where dice rolls determine your fate. 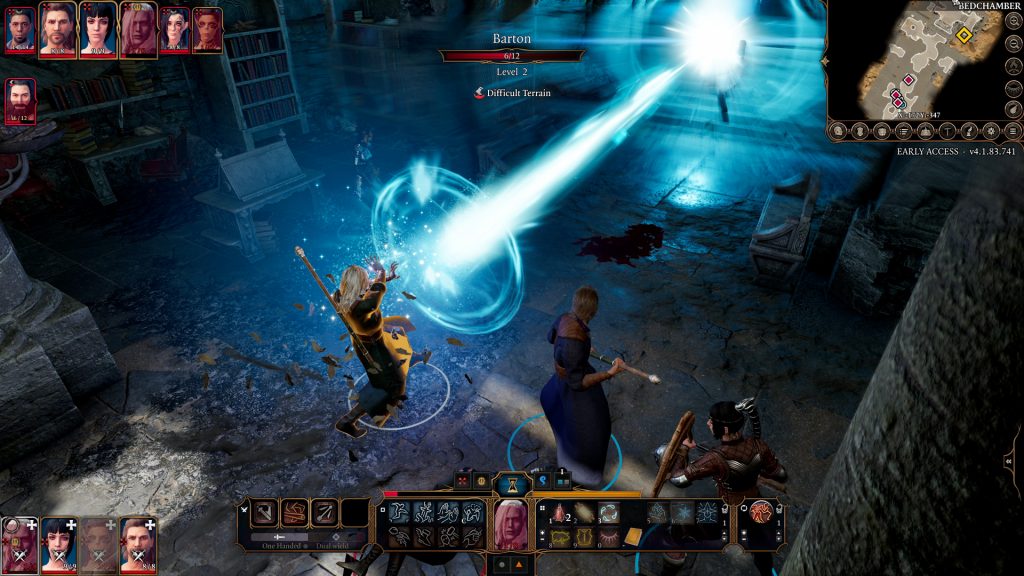 The system looks and feels like Dungeons & Dragons on its surface, but at the moment, it is far too heavily reliant on Larian’s combat system from DOS: II. The balance of Fifth Edition relies heavily on a specific breakdown of its action economy (how many attacks, abilities, etc. a creature can do each turn). Combat, in its current state, has borrowed additional area and terrain effects from Divinity, dramatically increased the hitpoints of monsters, granted them additional abilities, and redistributed some player abilities that entirely upset the balance of Fifth Edition’s combat system.

As a tactically-minded Fifth Edition player that thoroughly enjoys D&D’s combat system, I was incredibly excited for the prospect of a combat simulator that recreated the same tabletop rules. As it stands, successfully defeating your opponents in Baldur’s Gate III more frequently relies on constantly saving and reloading your game or basing your entire fight around getting to higher ground than your enemy (which increases your chance to hit your target). In the spirit of D&D, the system is flexible and allows for innumerable creative solutions, but as of now, that flexibility is actually at odds with many of the systems that define Fifth Edition’s combat rules.

Outside of encounters, however, Baldur’s Gate III expertly captures the sense of wonder, adventure, and discovery that is integral to Dungeons & Dragons. When your ship crashes to the earth, you are presented the chance to recruit a ragtag group of traveling companions, all of whom are expertly voiced and have their own personalities, desires, and playstyles. You have every opportunity to recruit them to your side or fight them to the death if you distrust them. The game’s multiplayer mode also empowers you to create your own party with you and your friends to adventure together! No matter who you choose to travel with, you’ll need to lean on them quite heavily as you navigate your way through the social challenges of the game.

While conversing with NPCs, you have the ability to choose from several dialogue options which often correspond to D&D’s alignment system. Good, neutral, and evil options can sweeten or sour your relationship with certain characters, and if you reach a point in a conversation where you have to roll the dice, you may choose from a number of distinct paths. Do you want to intimidate the Tiefling into believing your case, or do you want to move a bit more smoothly and persuade them to join your cause? 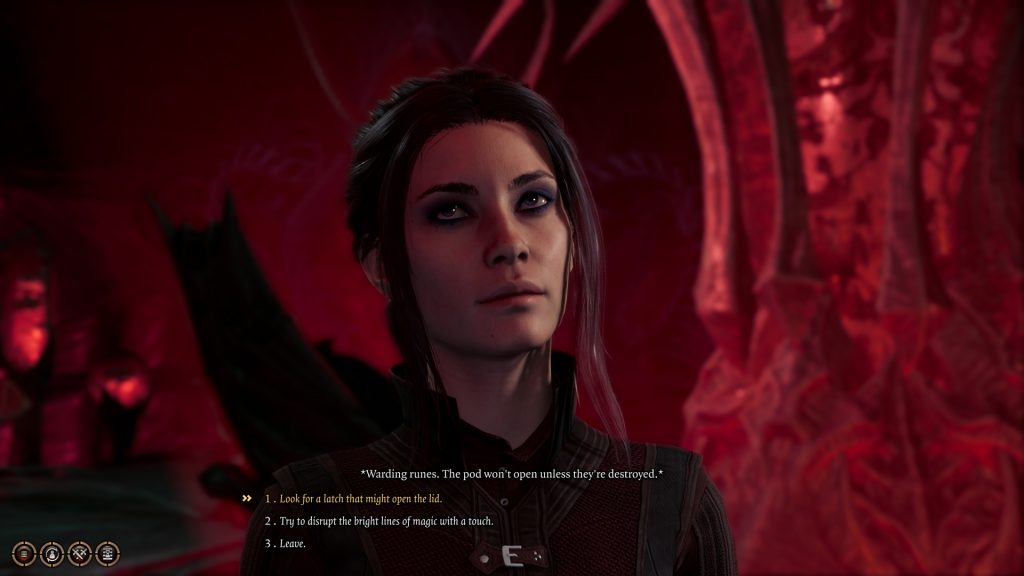 These social challenges and their corresponding dice rolls do turn the otherwise team-focused adventuring game into a one person show, but Larian has assured players that multi-person conversations are already in development! For now, your 8 Intelligence Fighter might have to answer a few complex questions about the arcane if they happen to walk up before your Wizard does.

After you’ve made some small talk with the locals, and your party has a few (or few dozen) possible quests on their to-do list, it is easy to become addicted to exploring the world of Baldur’s Gate III. The forests, temples, and dark caverns of Faerun are all rendered beautifully, and the serene score that accompanies a jaunt through the woods or the eerie notes that linger in the air of a goblin fort are entirely immersive. Wandering aimlessly along the road is also frequently rewarded. Integrated Passive Perception checks means that your wiser characters may notice a secret door or a hidden chest tucked away along a cave wall, though it is equally likely that you stumble upon a Gnoll ambush party. Adventuring is a dangerous life, after all.

As a diehard fan of Fifth Edition Dungeons & Dragons, I was beyond excited to see Larian Studios bring a game that exists entirely in my imagination to life. While Baldur’s Gate III’s Early Access is already a fulfilling game in its own right, it is not at all a faithful recreation of the world’s greatest roleplaying game. Rather than staying true to Fifth Edition, Larian has injected Divinity: Original Sin with a hefty potion of Fifth Edition Rules and brushed aside much of D&D’s core mechanics and strategies. Beyond the mechanical changes, however, Baldur’s Gate III is one of the most flexible, dynamic RPGs on the market, even in its rough draft state. With the overwhelming level of community engagement from both committed Larian fans and D&D fans (and the fact that the game’s Early Access debut crashed Steam), the talented team has an enormous amount of feedback to further improve everyone’s journey through Baldur’s Gate III. 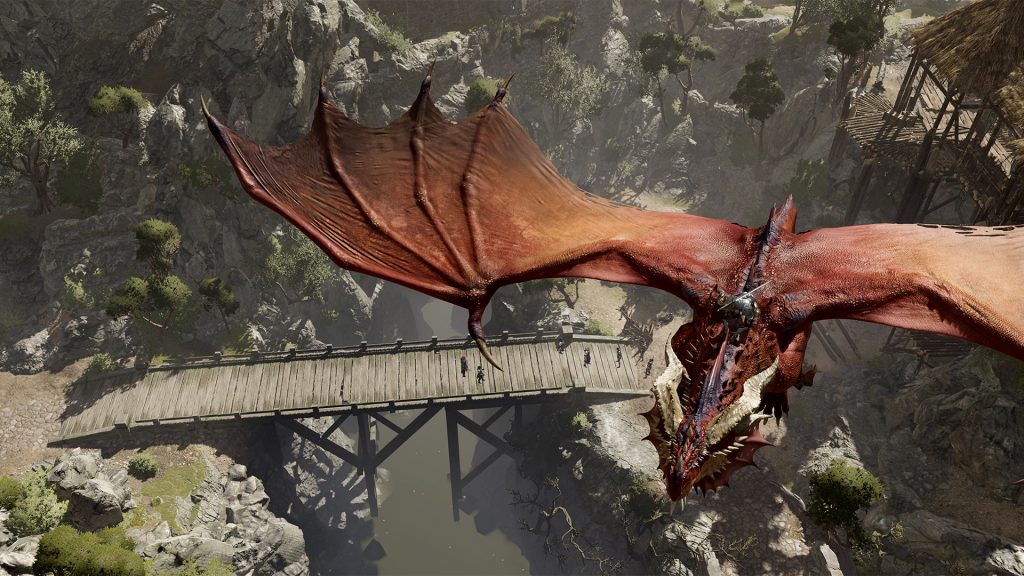 + Highly customizable and flexible
+ Wide variety of unique, compelling NPCs
+ Innumerable choices and paths
+ Vibrant, highly varied environment
+ Fully realized visualizations of spells and abilities otherwise only found on paper
+ Full freedom to explore much of the game at your own leisure (and peril)

– Still in Early Access. Bug-averse beware! This is a test.
– Dramatic deviation from the rules on which the game is based
– Combat feels more like DOS than D&D
– No compelling rewards for roleplaying as an evil character
– No experience rewarded for avoiding combat using social skills
– Current difficulty is extremely challenging (will be easily amended when difficulty options launch with the full game)