8 min read
Add comment
FacebookTwitterRedditPinterestEmail
Desperados 3 is an excellent game whether you’re a fan of real time tactics games or not. It’s challenging in the right way, and it rewards you for succeeding with even more tools and challenges.

Article by: Nelmynce
Note: Steam key was provided by the game developer.

Let’s get this out of the way right off the bat: Desperados 3 is a fantastic game. Long time fans of real time tactics games will probably already be familiar with the Desperados franchise; but for most newcomers to the genre (and let’s be honest, it’s not exactly a popular one, so chances are you’re one of the latter) you may be wondering—as I did—when Desperados 1 and 2 came out.

Despite being plugged into every piece of video gaming news I could get my hands on in the early to mid 2000’s, the first two games in the series slipped by me completely unnoticed, and it wasn’t until Desperados 3 caught my eye, due to the excellent Shadow Tactics: Blades of the Shogun, that I even knew it existed.

The first game got its fair share of critical acclaim, but the second was not as warmly received, and both were exclusive to the PC in a time where consoles were booming. There was another title shortly after called Helldorado but from what I’ve heard; we don’t talk about Helldorado.

Luckily Mimimi Games accounted for the relatively small fan-base of the original two games and made Desperados 3 a prequel, telling the story of John Cooper and a colorful cast of characters as they sneak, stab, and shoot their way across the wild west. 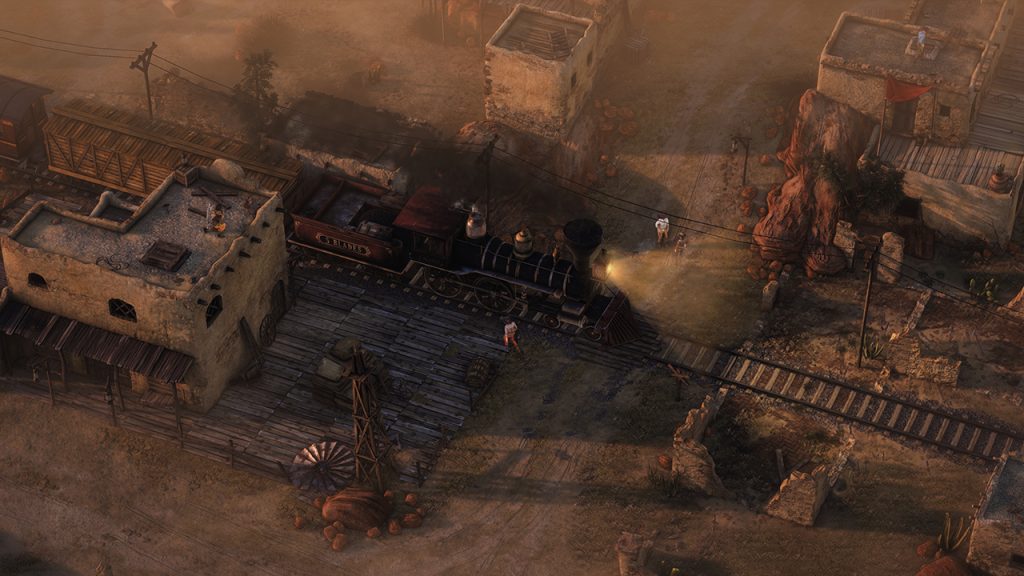 The story begins with you playing as Cooper’s son, teaching you the basic mechanics without any of the aforementioned shooting and stabbing. The two have arrived in a small town and are trying to find a man called Frank and need to sneak past a swathe of undesirables to do so. They make their way through the town and Cooper leaves his son behind in order to continue the pursuit on his own.

It’s not long before Cooper starts running into potential allies and old friends, all while finding himself in situations that become more and more precarious and contrived as the tale goes on and he gets closer to Frank. If there’s a western scenario you’ve heard about or scene in a movie, Cooper will find himself or his allies in it by the end of the game.

I won’t spoil much of it, but it’s silly at the best of times. The story is well told and fun for what it is and the voice acting is a highlight. The game does a good job of peppering the missions with natural-sounding dialogue and details about the cast and everyone feels fleshed out and unique against the backdrop of a stereotypical plot. They’re a refreshing standout, although not entirely original themselves.

Ultimately though, the story takes a backdrop to the gameplay, serving to funnel you from one stealthy encounter to the next before you finally catch up with Frank. There’s twists and turns, and a lot of western tropes that serve their purpose, but you won’t find anything surprising here. 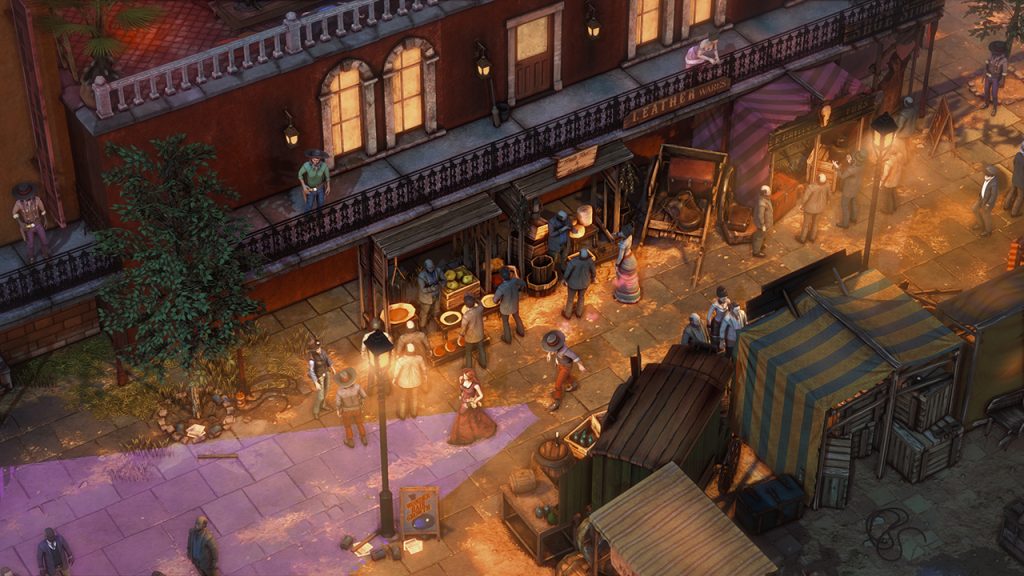 Where Desperados 3 truly shines is its gameplay, and I hope I don’t put you off by saying that this is a puzzle game at heart, because the sum of its parts is so much more than that. The basic premise is that you control one or more characters and must sneak your way across a level to achieve various objectives, usually involving dispatching a bad guy or twenty blocking your way to the end of the level, and ultimately to Frank. Stealth, distraction, and dispatching enemies quietly is the name of the game here.

At first the game puts you in control of Cooper’s son with only a couple of abilities and no way to kill enemies, forcing you to utilize the hiding and distraction mechanics that most of the characters are capable of in one way or another, but it’s not long before it expands.

In fact, it expands to such an extent that I was still learning new mechanics and getting new characters six hours in. This may sound like an extremely long tutorial; but it never feels like the game is holding you back—quite the opposite. With 5 characters in total (6, if you count Cooper’s son) and each with 5 unique abilities to somehow distract, attack, or otherwise modify the playing field there’s a ton to learn. 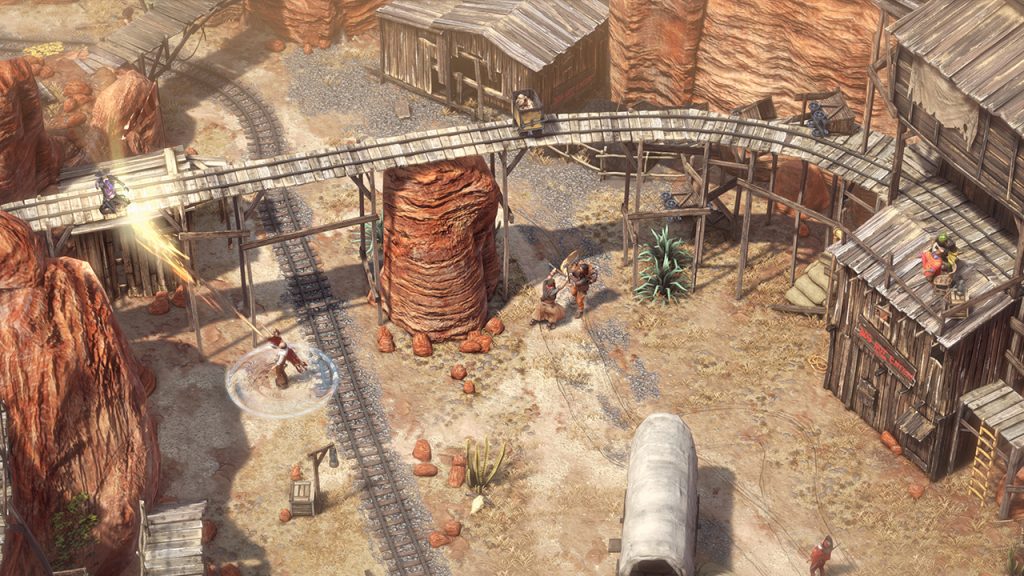 All of the characters have things they’re great at and things they’re not suited for. Hector, Cooper’s burly friend he reunites with early on, can carry up to two bodies at a full run whereas Cooper can only handle one, and at a walk. But Hector has no long-range abilities and relies on a trap and a whistle to bait and dispatch foes whereas Cooper can throw his knife or use his pistols to instantly dispatch foes from range. Doc McCoy on the other hand– an older hired gun that Cooper meets during a train robbery –can only barely handle a single body, and at half the pace that Cooper goes. The upside is he’s got a custom pistol with a long barrel that effectively acts as a sniper rifle, making him great for taking out enemies that would otherwise be inaccessible.

There’s more to it than just ranges and walk speeds, but I won’t give away some of the more interesting abilities that your later companions have. The game does a great job of providing variety by pairing up different characters and not always including Cooper– who acts as a jack of all trades –on missions, which makes you really learn the strengths and weaknesses of the rest of your companions.

Enemies aren’t straight forward either, and all of them have traits that make things more interesting. Some can’t be lured away from their post or patrol, while others are particularly large and can only be handled by Hector.

It goes without saying that with five characters in your party and so many different variables to assess that there’s a lot of planning that goes on to make it across a level, and with that planning comes trial and error. The game doesn’t impose a Dark Souls-style punishment though, and even has a timer that reminds you to save during regular intervals that you can set. It’s a little aggressive at first, but as you progress you’ll find that even after two minutes your situation can change quite drastically and you may have gotten yourself into trouble. It’s one of those features that makes me wonder how I had lived without it for so many years in similarly styled games. 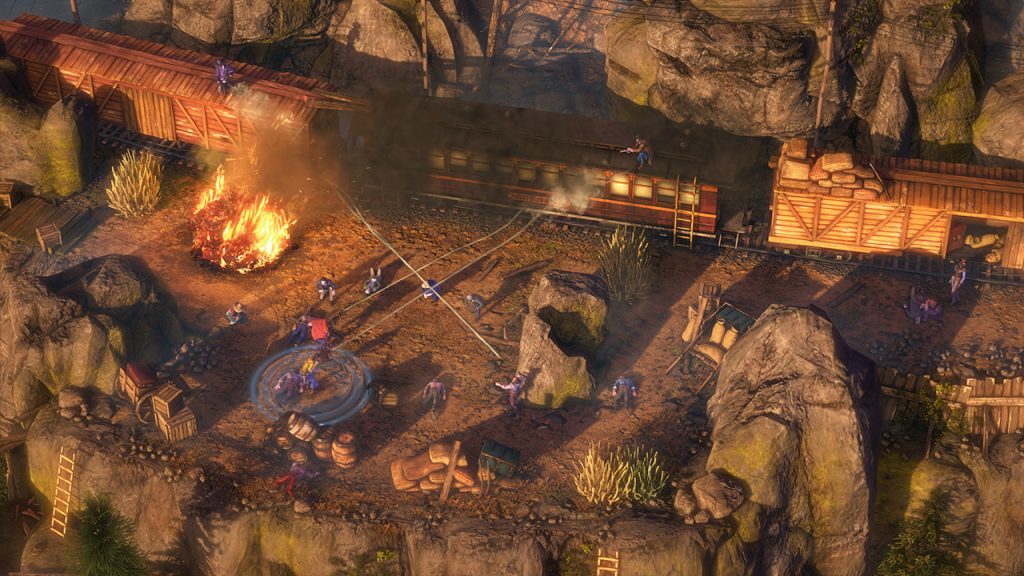 There are other tools that are agnostic to the characters you’re playing, like being able to pop down a marker anywhere on the screen and see which guards can see it as they patrol around; or showdown mode which allows you to pause time and plan out actions for each of your characters and then either execute them all at once, or use hotkeys to trigger them in quick succession.

There’s plenty of replay value too, with challenges at the end of each mission. While you’ll probably be repeating plenty of sections the first time through if you’re not a veteran of the genre, the complexity, the characters, and the fact that you’re not punished too harshly for failing make for a very satisfying and engaging experience.

The graphics in Desperados 3 are the only thing that hint at this game being a AA rather than a AAA production. Character models are good, and the animations are expressive, but they’ve got a cartoony look to them which may or may not be your cup of tea. For the most part they look as good as they need to, but when the story gets going and the camera zooms in, little details like people’s mouths not moving when they speak can detract from the experience.

The levels however are gorgeous, and the various effects like firing a gun, waterfalls, blood spatter, and fire pits all look fantastic.

The music is fittingly western, but there’s nothing that particularly stands out. Gunshots are loud and impactful, and the sound of a knife flying through the air or a rock falling on someone are all as satisfying as ever. The voice acting especially deserves recognition for being better than in a lot of bigger budget RPGs, and really helps make the characters feel real. 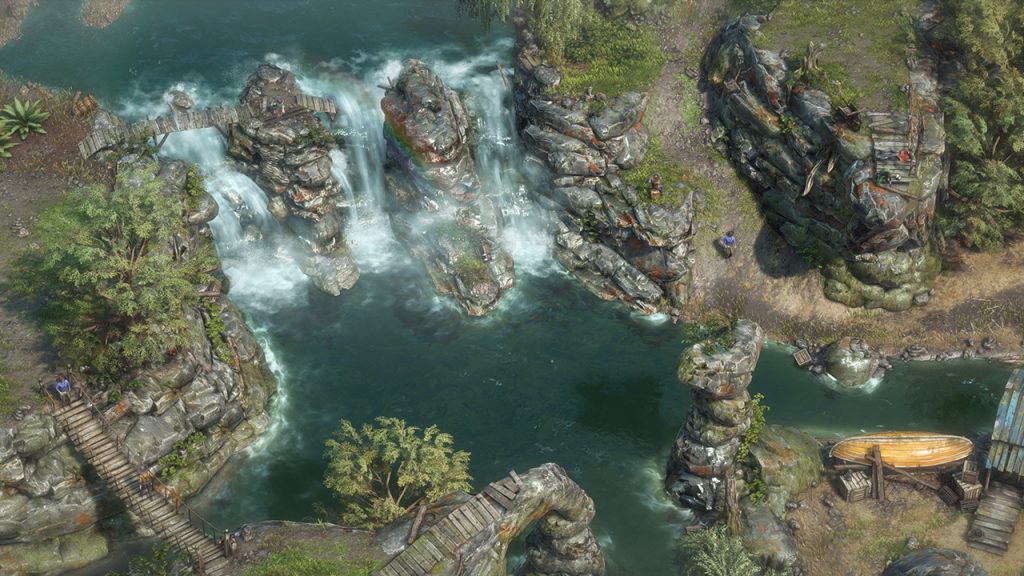 Desperados 3 is an excellent game whether you’re a fan of real time tactics games or not. There’s a ton of variety and every level has a set of guards, routes, and challenges that really force you to think and experiment to get past them. It’s challenging in the right way, and it rewards you for succeeding with even more tools and challenges.

Considering the game is only $49.99 the production quality is off the charts. If you love real time tactics games, puzzles, stealth, or you’re just looking for something new, Desperados 3 is an excellent choice.

+ Complex experience, tons of replay value
+ Excellent example of a genre that doesn’t often have a lot of titles made in it
+ Great voice acting
+ Every level provides an interesting set of challenges to overcome