Summer in Mara, the newest release from Chibig Studios, drops you onto an island and in control of the young girl, Koa, as she becomes a respected master of the open ocean and befriends the ocean’s many inhabitants.

A summer getaway to a virtual archipelago filled to the brim with colorful crops and adorable animals sounds like a dream trip. Islands drift in Mara, the ocean that spans the planet of Qü, each home to scattered civilizations and long lost history. Unfortunately, this history is buried beneath dated technology, not of the fascinating, rusting civilization that once thrived on the planet but of cumbersome menus and inconvenient loading screens.

Although Mara consumes much of the planet, most of Koa’s journey is contained to two of the 20+ locations: her home island and the metropolis of Qalis. The adventure begins on a rough-hewn, isolated island where Koa lives with her grandmother, Yaya Haku. Haku reminds Koa of the fundamentals of farm and island care. She teaches you about the importance of respecting the island’s guardians (who provide rainfall for your crops) and properly caring for the natural resources of the land by replanting plants that you harvest. 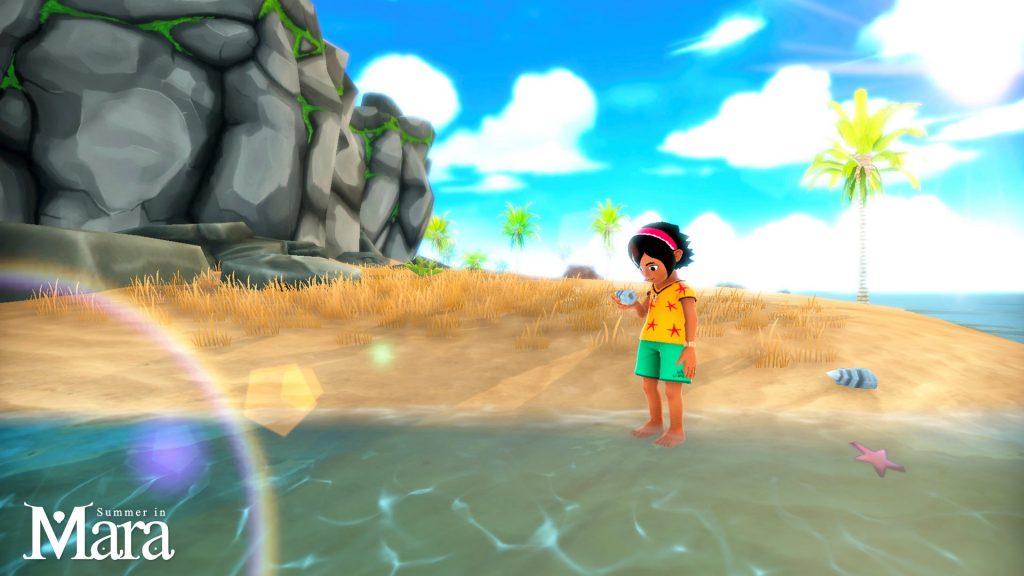 Immediately after the tutorial section ends, however, a single night passes and a disorienting time skip throws you into the core story: Haku passes away, and Koa must set out on her own. A mysterious figure named Napopo arrives in the night and helps you navigate the ocean on Haku’s old boat, fueled by an ancient, natural energy source called Mahla. The full freedom of the ocean is unfortunately barred until you are able to further upgrade the boat’s engine. The map of Mara is divided into 35 explorable segments but many of them are barren; even those that contain islands are home to a single point of interest and are easily forgotten.

Before sailing Mara at large, your first destination is the island city of Qalis. Long city streets, busy passersby, and a bustling marketplace showcase a stark contrast between Koa’s rustic home. The inhabitants of the city are a diverse mashup of races—the amphibious Quido, cat-folk, the industrious Elit, and even other humans—and they live in peace here. Though at first glance Qalis seems expansive, many of the NPCs (and buildings) are low-resolution, cardboard cutouts designed to make the city feel larger than it is. The few characters that you can interact with, however, are stunningly illustrated and come with unique personalities, beliefs, and goals. 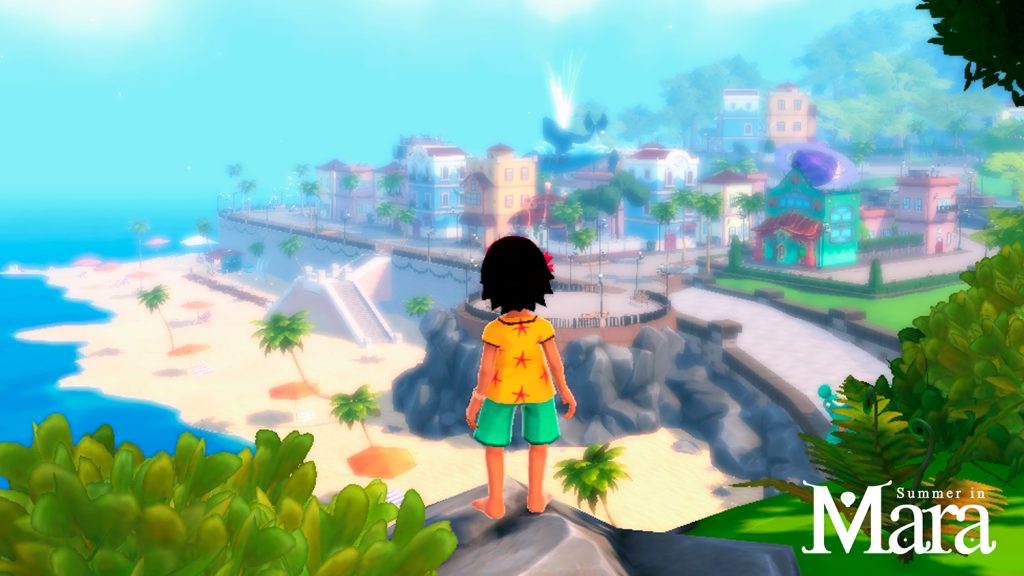 You can get to know each of the characters by completing fetch quests for them. Whether they’re working on their own project or trying to win an escalating restaurant war, you can win their favor by crafting new goods or tools, scouring the ocean for exotic fruits and treasure, or trading for new trinkets. These quests turn Mara into a beautiful, living world and offer a change of pace from the humdrum island farm life, but a wide array of glitches that block quest progression and navigation-related inconveniences quickly make them exhausting.

Finding a natural pineapple farm on a distant island for a new recipe is exciting—the first time. Koa can fast travel to Qalis at a minor cost, but other locations aren’t afforded the same luxury. This frequently means that a series of quests will send you back and forth, in the same direction, or even to the same island, back to back. This repetition turns the thrill of sailing to the horizon into a backtracking slog, and this is made worse yet by the game’s crafting system.

New recipes build organically on existing tools and ingredients, but it is impossible to know that when you learn them. If a Qalis native needs a new dessert sent to a friend that lives a few minutes away, you have to return to your island to view the recipe at Koa’s workbench (which is only available on the home island). A typical quest unfolds in ten steps:

In even worse scenarios, you may return to Qalis only to discover the shopkeep does not have enough of the ingredient you need, or the ingredient is another island altogether. This is also further complicated by an inconvenient shop interface that makes buying and selling items (especially in bulk) frustratingly slow. 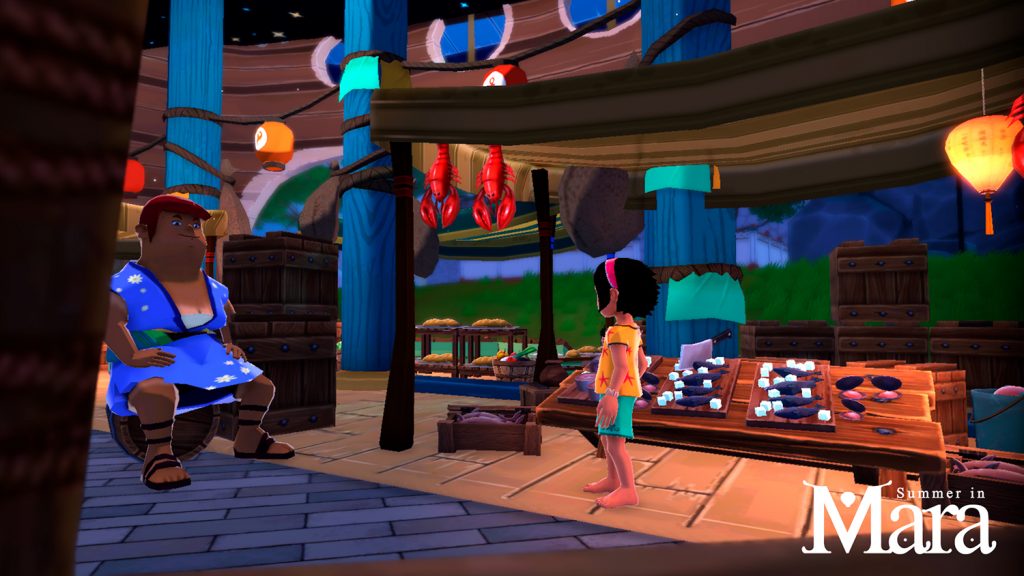 Once you have everything you need though, the slow, meditative joy of farming simulation makes Koa’s home island a joy to live on. Gradual upgrades to your core tools—a hoe, an axe, and a hammer—provide new opportunities for island improvements, and the diverse appearances of Mara’s crops allow you to shape a unique vision of your home. The serenity of the island is also amplified by a melodic score and the natural chirps, caws, and twittering of the tropical ecosystem.

Life on the water is just as relaxing, though offers fewer things to do. The occasional boat race against Mara’s pirates (whose ship designs are audacious and amazing) are simple narrative tools that lack challenge or real substance. Scattered buoys on the water offer opportunities for diving and fishing minigames. Diving is a single button endeavor, and fishing is reminiscent of other farming simulator games without much added—your goal per fish is to keep the creature in a certain range as a cursor bounces erratically along a bar.

Dynamic and colorful character illustrations, snappy dialogue, and a heartwarming tale of friendship make Summer in Mara a quaint vacation destination. With a few additional activities and some minor quality of life improvements, it may be a must-play experience for fans of slice-of-life games and farming simulators. 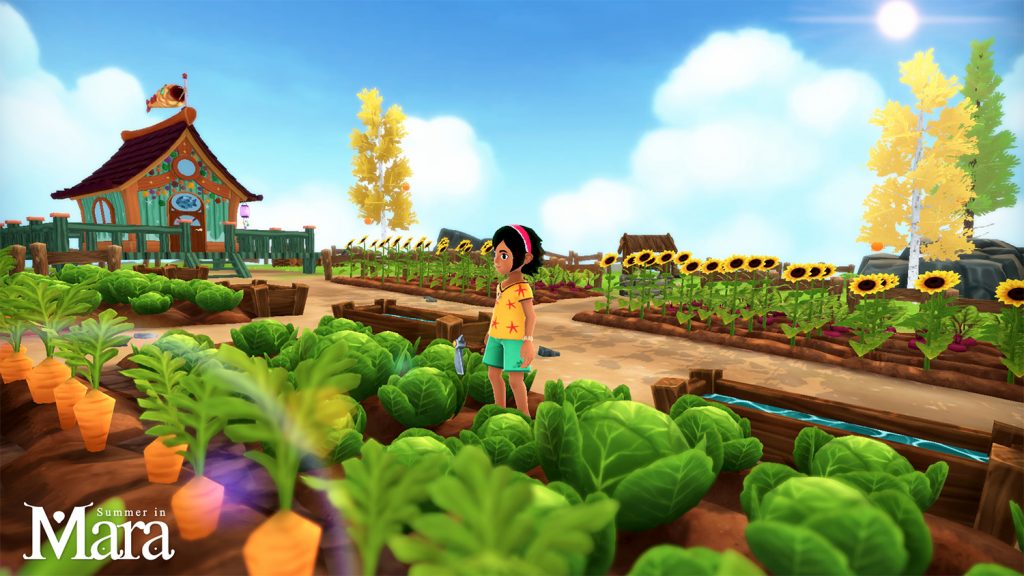 + Stunning character models and witty dialogue paint clear pictures of Mara’s population
+ The world’s past (and future) are cleverly depicted through seemingly innocuous fetch quests for locals
+ Aside from some shops closing at certain hours, most of the game is not time-sensitive
+ The crafting system builds on itself and helps weave otherwise separate quest lines together

– Glitches can entirely block quest lines
– Technical inconveniences make simple objectives much more complicated than they should be
– The world appears full on the surface, but lacks depth as many islands in Mara are void of content

Note: A recipe book is currently available on the PC version of the game and will be coming to the Switch version in a future update. The developers have also formally announced bug fixes for a few broken quest lines and the addition of fast travel and more workbench locations. These improvements all mean a dramatically improved gameplay experience that I would strongly recommend to anyone looking for a relaxing tropical getaway.