Note: Apparition has just launched in Early Access, so this is a preview of the current state of the game.

The approach Apparition takes to the standard horror game genre is somewhat interesting. It’s a first person survival horror game in which you play as a paranormal investigator who is simply in it for a quick buck. With a more modern than usual storyline, introduced in a pre-game intro cinematic, we learn that our character simply trolls around various social media outlets looking for reports of paranormal activity, and armed with a camera, will go to gather evidence of said activity and “sell it for a quick buck.” I have no idea who he sells this proof to or who would even care to buy it, but that’s not a question this game cares to answer as far as I can tell.

That’s also not really a bad thing. Apparition is not some big production. It’s a simple game, and that works well in its favor. You fire up the game and watch the intro cinematic, then you’re offered the option to choose the equipment you enter with, which are basically various tools to help you document paranormal activity. As you play the game, you earn evidence points which you can spend to equip more items that can help you along the way.

Armed with a still camera, a lighter, and a book about how to most effectively use a Ouija board, I’m dropped into the map next to a vehicle with a candle in my hand and a note to open my journal, and this is what I see. 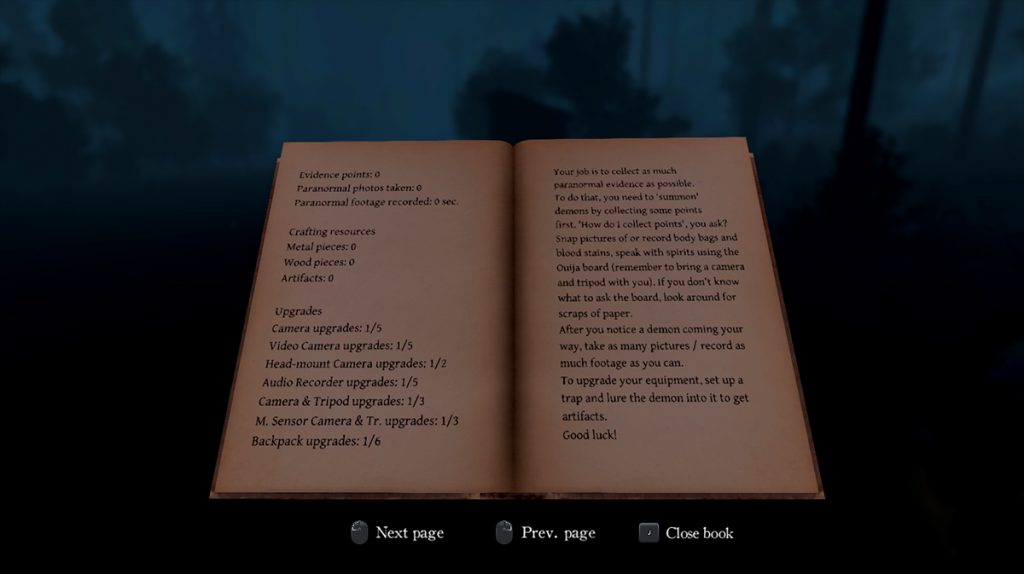 As you can tell, the game is very much survival-based. Normally, this would scare me off, but that isn’t what caused me to stop playing this game a few times pretty early on. To be quite frank, this game is just terrifying. I know that I scare easily, but the real-world setting really gets to me and helps sell the fear as a whole. The sound design is pretty decent. I didn’t really hear anything that blew me away, but it is effective. The rustling of grass and trees, the occasional whisper or voice in the distance that you aren’t really sure that you actually heard — it all works very well.

Gameplay wise, it’s fairly simple. You can swap between your various pieces of equipment and beyond that, just start walking. One thing that did consistently bother me is that there isn’t really a well-defined border to the play area. Many times I would simply be exploring and the game would (what felt like randomly) tell me I was “leaving the play area.” Walking through this wooded area, you will stumble upon various pieces of evidence of “foul play” by Plague, the “demon” that we are here investigating, responsible for a number of disappearances in the early 2000s. The atmosphere is effectively frightening as you explore this extremely dark location searching for clues like bloodstains and body bags, as well as searching small structures like outhouses and cabins. All fairly standard fare, but the game really does a great job immersing you in this world, leaving behind anything fantastical and just letting you be a real dude, in modern times, looking for scary shit.

You also are tasked with using a Ouija board to actually summon this creature you are here to investigate, which is totally safe and not dangerous at all, right? 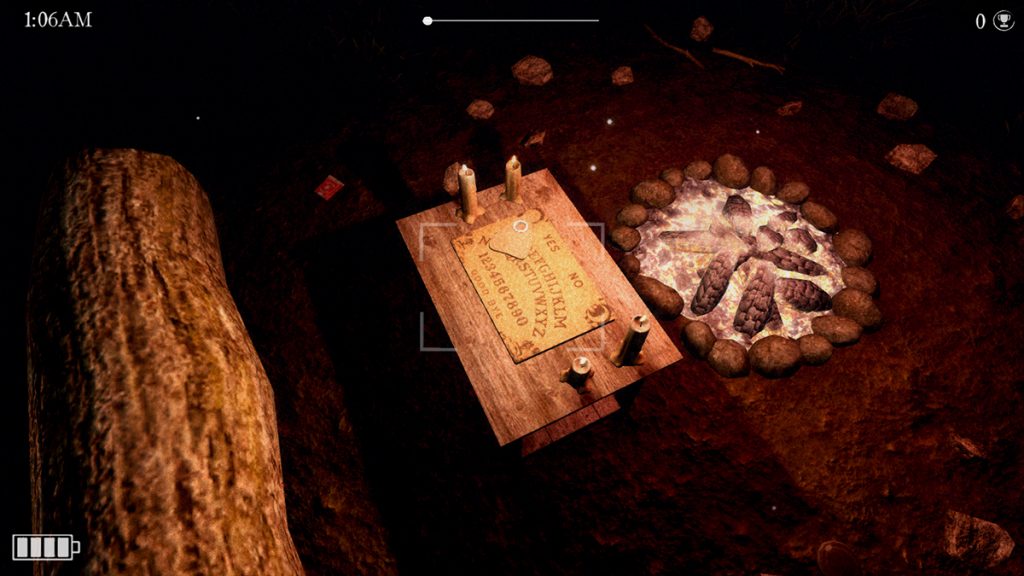 As we troll around the map, we also find scraps of paper which offer us questions to ask the board. You can also simply type in your own, which is a neat mechanic, but you’re still required to ask specific questions. There’s no sort of flavor of AI here as far as I can tell. That being said, it’s still very good at keeping the tension high, offering ominous responses to simple things like saying hello, such as “WANT PROOF?” with no more responses afterwards. Of course, once that happened I was basically doomed to be chased down by something big and scary (which I was). Overall, I really enjoyed my time with Apparition and look forward to playing more. I do look forward to the environment branching out, because my biggest fear in regards to the life of this game is replayability. I could absolutely see some players simply dropping in to grind for more of those ‘evidence points’ for better equipment, which in my opinion sort of ruins the fun of it all and totally misses the point. However, if you enjoy games with a survival twist and want to get a little spooky, you really can’t go wrong here.