4 min read
Add comment
FacebookTwitterRedditPinterestEmail
The Low Road was about a three hour-long playthrough where at times I chose to skip through meaningless dialogue and push straight on through with the narrative.

The Low Road is a point and click adventure game developed by XGen Studios that tells the story of corporate spies of the automobile industry in the 1970s. The game contains a “gauche inspired” art style as well as intricate and sometimes humorous puzzles, quirky characters, and a slow burning narrative.

It’s 1976 and Noomi Kovac “paid her dues” and has gleefully graduated from The LeCarre Institute for Exceptional Spies (L.I.E.S) with hopes to be the world’s greatest spy. Sadly, the rest of the world doesn’t yet know of her hopeful “World’s Greatest” title and seems to do everything but help her with her path to success. Stuck as the assistant at Penderbrook Motors Division of Outside Intelligence she works alongside Turner (Barney “Turn” Turner) to crack the latest and greatest mysteries surrounding the automobile industry. 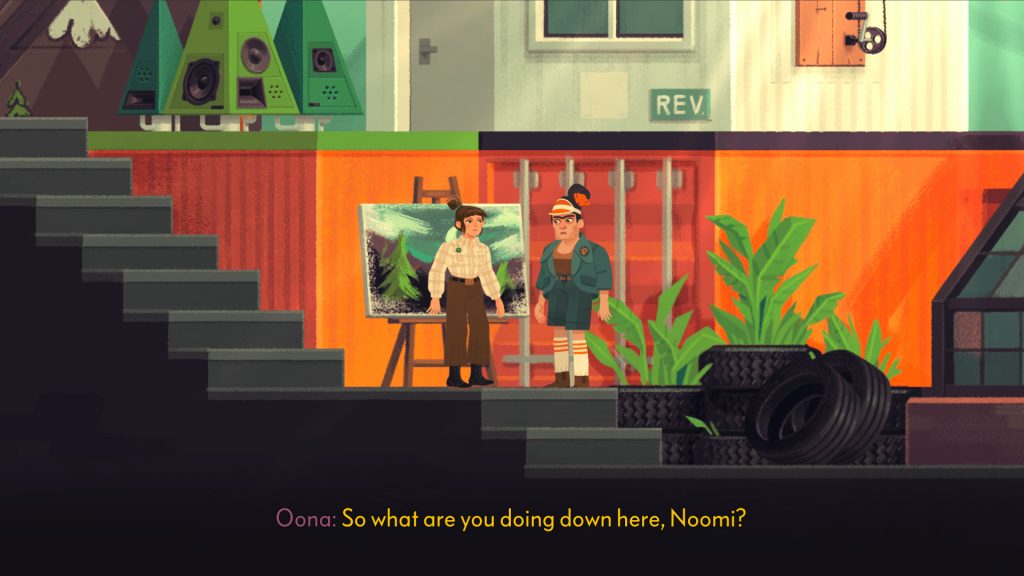 In the first portion of the game, you spend your time solving riddles by rhyming, pick pocketing the agencies only field agent, and even lying your way into a cult. Each character you interact with has its own set of traits and clever dialogue but can at times feel mundane and a bit repetitive. The game itself has a brilliant narrative and strong writing but I couldn’t help but find myself skipping through some of the dialogue options. The dialogue slowed the narrative down at points for no real reason other than to hear a character complain or, even worse, outright trash Noomi. It can be funny at times to watch characters bicker or try to outsmart the other while at different points it can feel less fun and more of a chore with little to no reward. 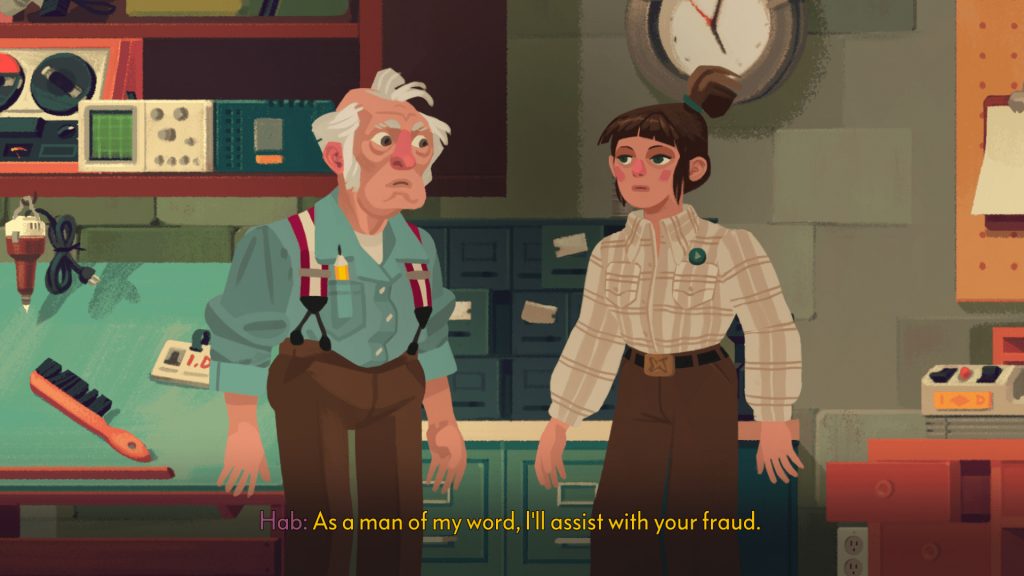 Noomi clearly has a thirst for action and espionage and refuses to settle for a desk job. Each of the mini-games, although some more novel than others, are fun and mostly easy puzzles. Each successful puzzle helps guide you through as you work to advance Noomi’s possibilities of sabotaging her way out into the field and away from that boring work desk. Noomi finds herself having to “prove” to another agent that his jacket is “un-pickpocket-able” by fumbling through his items to essentially “steal”, or some may say “borrow,” his I.D. for game advancement. This puzzle, although fun and clever, felt slightly underdeveloped and lacking in originality. This theme echoed throughout the game with most puzzles. I do love an easy puzzle but the harder more intricate ones tend to be what really sink me into a narrative. The most exciting and intricate puzzles were the ones where you felt like you were actually a spy. The phone sequences included a simple file of the individual you were speaking to with a simple directive: “obtain information. ANY information.” These moments gave way to true espionage, bluffing, and even seemingly impromptu answers keeping you on your toes and full of excitement. These moments stood apart from the others by making the player feel as if they were progressing towards a goal of becoming a skilled spy versus those that felt more like chores and screen fillers. 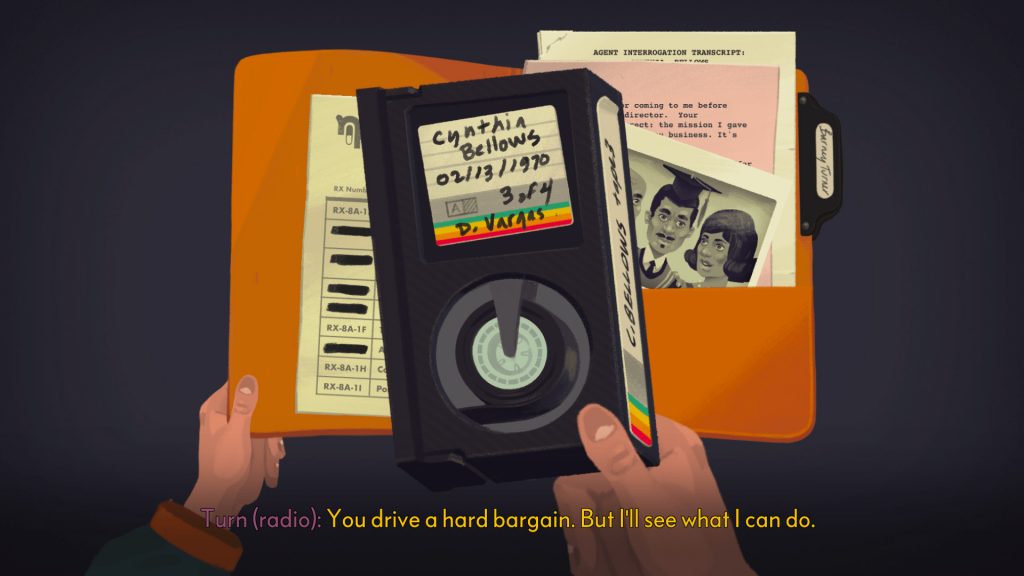 The soundtrack and art perfectly compliment the theme and narrative of the whole game, immersing you into this world with ease. Something that is a really strong feature of most point and click games is their ability to draw you in with not only the narrative but also the atmosphere. XGen’s team did this almost flawlessly with music that felt like it was pulled directly from the 70’s paired with a consistent and vibrant art theme that seemingly couldn’t exist without the former. The voice-acting mostly consists of strong quality and clear character choices while the robotic character movement of each character lacks the vibrancy the voice-acting provides. Although this movement mechanic could easily be argued as “paired well with the retro theme” I couldn’t help but want more from these already wild and neurotic character movements. The movement in particular was the only element that remained the same in each character, while the outfits, voices, and writing were full of diverse and at times complex detail. 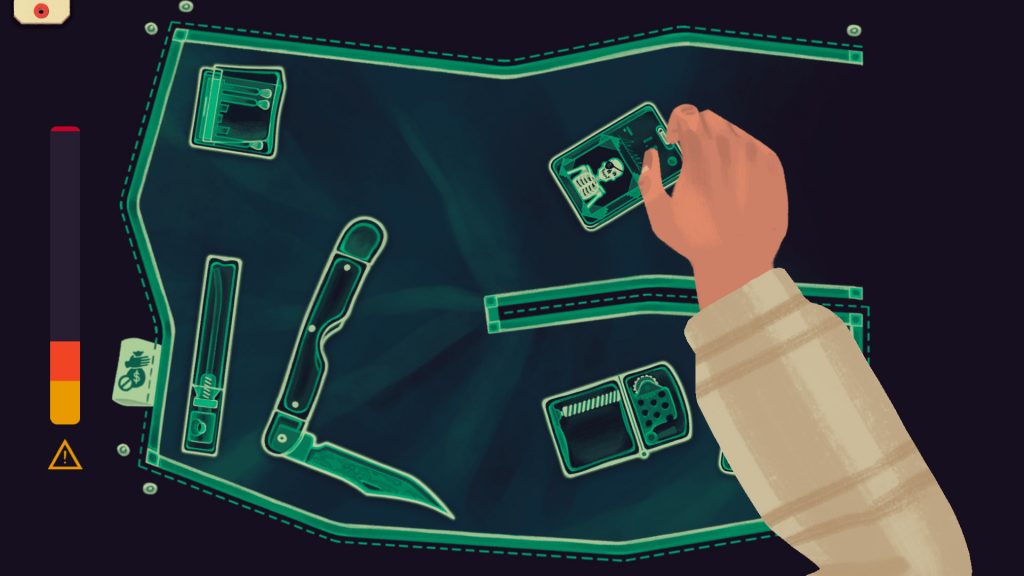 The Low Road was about a three hour-long playthrough where at times I chose to skip through meaningless dialogue and push straight on through with the narrative. The game lacks replay value but could easily gain points with DLC content or a secondary narrative.

The Low Road is available for purchase in the Humble Store.