8 min read
Add comment
FacebookTwitterRedditPinterestEmail
The Inner Friend, despite having an interesting premise, some unique visuals, and a memorable atmosphere, is an exercise in the whole being less than the sum of the parts, imparting the feeling of a title that is still in development as opposed to a finished game.

I do love a good horror game – the mystery, the suspense, the jump scares. I have the advantage of being a bit older than many gamers, so I was able to play the first iteration of Resident Evil and Silent Hill when they were new and the genre was but a young lad (or lass). Then came the ridiculously good follow up titles: Resident Evil 2, Resident Evil 4, and Silent Hill 2, followed later by Until Dawn, The Last of Us, and more.

When I saw the screenshots and videos of The Inner Friend, I was floored – a beautiful, stunning, puzzle platformer of the indie horror genre. The taglines accompanying the media were just as enticing. They describe a “surreal world inspired by childhood nightmares” where you can “immerse yourself in a visually-driven narrative” to “earn the Shadow’s trust [and] unlock new challenges and pieces of the story.”

What I actually got was… unexpected: a game with great potential whose creative inconsistency and marginalized story yield a missed opportunity.

A narrative is essential to any game, especially one based on story progression. And while The Inner Friend touts a deep, immersive narrative, the actual experience is anything but. Don’t get me wrong; the story concept is great, but, at the end of the game, it just feels sorely underdeveloped and underutilized.

We can piece together an overall theme, yes:

There’s an old man with light for a face, and we step into his subconscious, returning to his mysteriously empty childhood room. We journey into his childhood fears through a crack in the bedroom wall, overcome these fears, and collect various objects and knickknacks to decorate said empty room, all so the old man can get a real face and be at peace.

But… why?! We never learn anything revealing about the old man, the Shadow (our in-game avatar), or the fears themselves. I’m not saying the details should be spoon-fed to us as players. In fact, I prefer to reason it out based on the game as it unfolds. But in this case, there’s no story payoff to the gameplay.

There are no on-screen subtitles, no voice acting, and no implicitly presented narrative to help you figure out what’s going on. It’s one thing to leave some elements up to the interpretation of the gamer, but it’s another to exclude so much information that the story feels disjointed, and that’s what happens here. Without the tendrils that tie together past, present, and future, or the indicators that explain to us why these childhood fears are resurfacing (or why we should care that they have), it’s hard to feel an emotional connection with anything or anyone on the screen.

The only good thing about the lack of detail and information in regard to narrative is that it might actually add to any sense of discomfort or apprehension you feel while playing.

I will say this – The Inner Friend’s control scheme is simple and elegant. Everything you do in the game is done with 5 keyboard keys and the mouse. You control your avatar directionally with W-A-S-D, and you can do a meager jump with the space bar. In addition, you’ve got some camera control (up-down-left-right) through mouse movement, and the left mouse button is your interact. That’s it. I’ll happily add that in the 6+ hours I’ve spent in the game, the controls are always fluid, correct, and precise, and not once did I experience a single movement, collision, interaction, or camera glitch. That’s a level of professionalism that can’t be overstated. 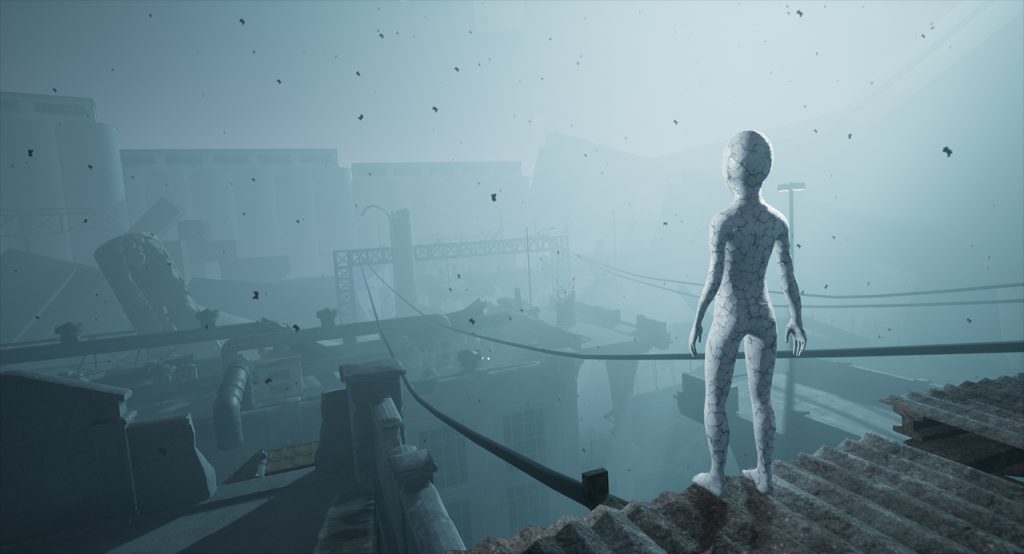 Another nice note is that we’re not the typical protagonist; as a pseudo-naked, porcelain-looking, child-like avatar, you have no defense against the monsters and obstacles you encounter. Your only hope is to stay hidden, solve the puzzles, grab the collectibles, and get out quickly.

There are basically three different environments you encounter:

You do feel the physical connection between these three spaces, but there’s no real significance to that connection. Even though the Bedroom has places for the collectibles you find in the Game Levels, the collectibles themselves don’t really seem to mean anything, apart from their nostalgic or sentimental value, and there’s no apparent rhyme or reason as to why a particular item is located in a particular level. Placement of collectibles within a level also seems nondescript and meaningless. 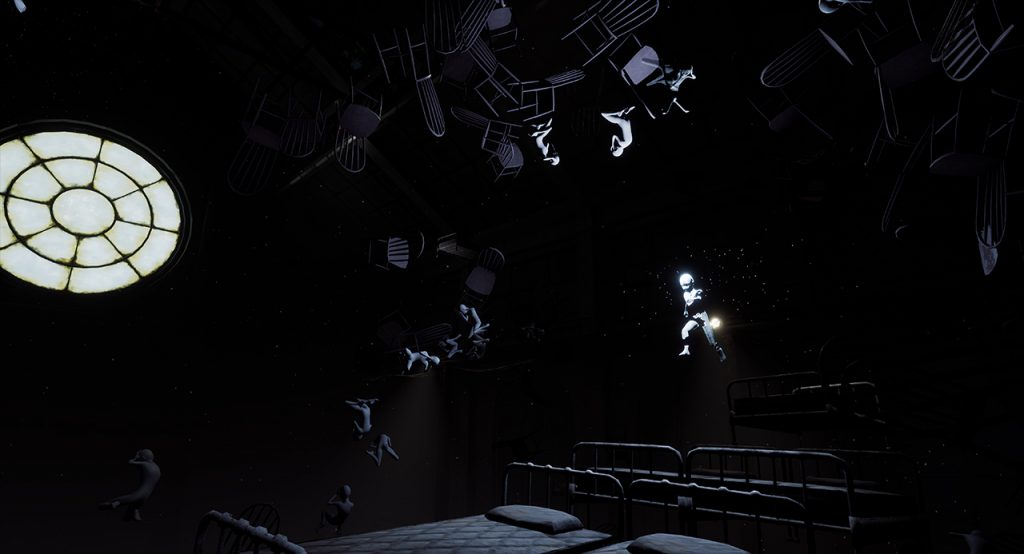 Where the levels start to unravel is in the mechanics. On most levels, the puzzles you have to solve are rudimentary at best, and what you do or learn in one level rarely translates into usable experience on another. On the levels where puzzles aren’t the focus, escape should be the key to survival, right? The only problem with that logic is the monsters seem to have very little to offer by way of any true threat. When you do meet an untimely end, frequent auto-save means you rarely have to go back very far. And since there’s no health meter, no armor, no weapons, and no inventory, there’s no real risk of dying in the first place – you’ve always got a 1-up in your pocket.

The only thing that seems to have any sort of significance is the collectibles – and even that’s a red herring. Whether you get 1 collectible or all of them, you move on to the next level automatically, and the game always seems to end the same way, regardless of what you’ve done and how well you’ve done it.

I really feel like the puzzle/evasion mechanics, environment detail, and collectible system were missed opportunities to enhance and deepen both the feeling of immersion and the narrative itself, by keying the collectibles to the levels in some way. For example, if I were to find a teddy bear in the Hospital level, it might be a symbol of love and healing; a trophy for overcoming the fear of doctors/surgery, and invasive medical procedures. And make it so I have to avoid the monsters in the Hospital, solve the puzzle(s), and get the teddy bear out to solve the level. The completionist in me would also have liked the ability to revisit past levels to replay them – better my time, get collectibles I missed, etc. 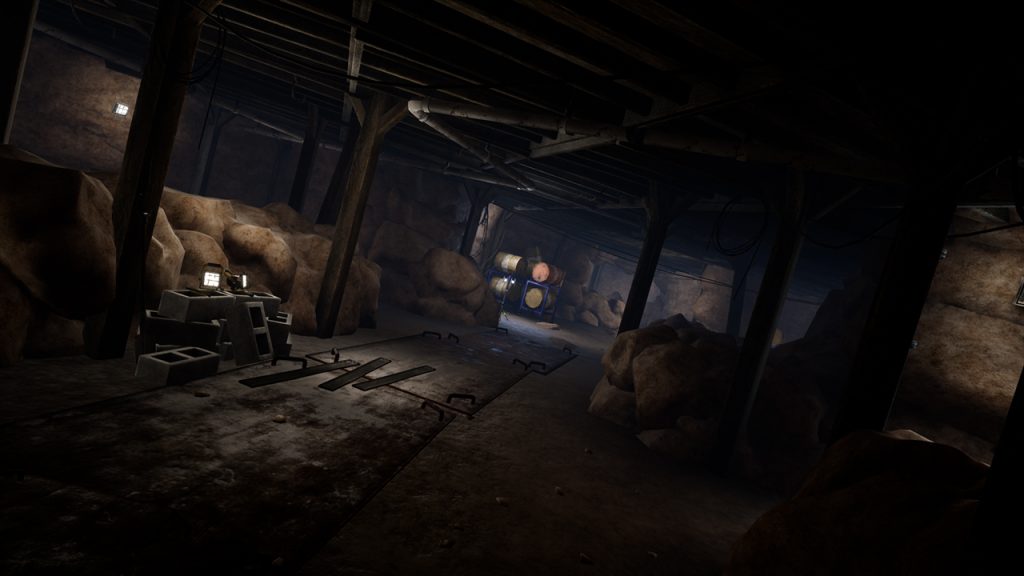 I’ve already mentioned that the visual gives the game a nice atmosphere. The three different settings have a distinct feel; you know where you are, and the environments are pretty normal, as far as locations go. What makes them so unsettling is that we’re seeing them through the lens of a terrified child, so they take on this nightmarish or ominous quality. But as pretty as they are, these environments seem hampered by this feeling that they’re rehashes of places we’ve seen in other games of the genre.

On many of the game levels (most notably the Barber Salon), it felt like the world was populated by duplicates of a few objects, copied out repeatedly to fill the space. When this happened, it was definitely distracting to the feel of immersion you got on more unique, visually stunning levels like the 2001-esque Museum.

The audio work, however, was really well done. The ambient sounds and music were all spot on as far as volume level, direction, and timing.

The Inner Friend, despite having an interesting premise, some unique visuals, and a memorable atmosphere, is an exercise in the whole being less than the sum of the parts, imparting the feeling of a title that is still in development as opposed to a finished game.

– Puzzles are simplistic and benign
– At about 2 hours of gameplay, it’s entirely too short
– Disjointed, unfulfilling narrative

The Inner Friend is available for purchase in the Humble Store.