The Gardens Between – game review

5 min read
Add comment
FacebookTwitterRedditPinterestEmail
The Gardens Between is a unique puzzler that makes up for its slow pacing with a deeply nostalgic and emotional story.

The Gardens Between, developed by The Voxel Agents, places you in the shoes of Arina and Frendt, two neighbors that share a treehouse. Cradled above an old playground, under the rumbling subway tracks, and nestled between their houses, the treehouse takes the two of them through a few of the wonderful memories that they’ve shared throughout their friendship. These memories spring to life through the game’s beautifully vivid colors and textures. Calm, safe greens and blues fill in the first stages of the game. Hazy, pastel pinks and yellows warm the middle. Deep blues and somber purple hues shade the final stages. 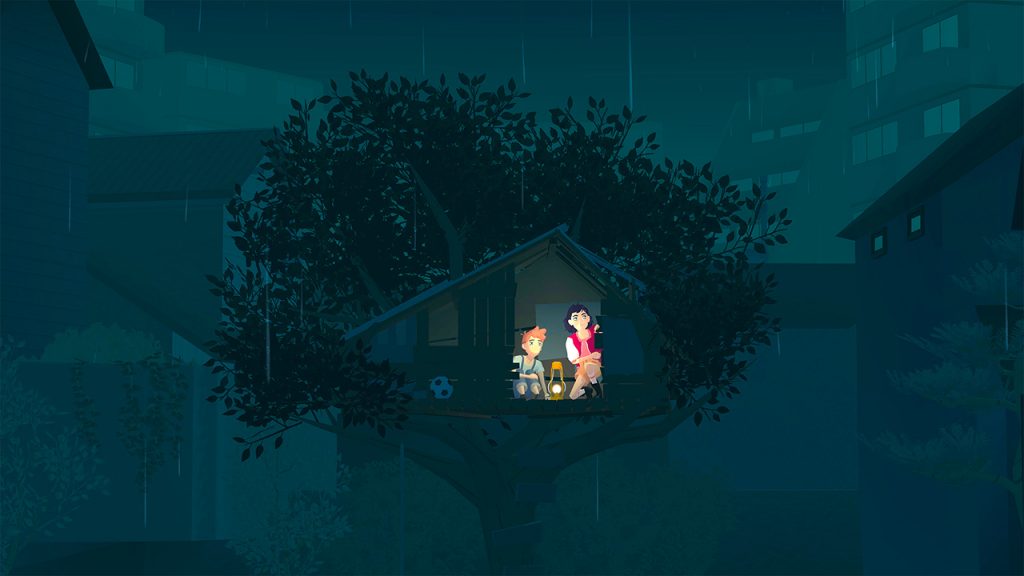 The treehouse’s journey through color is guided by the flow of time. The Gardens’ art direction and narrative are echoed through gameplay where time dictates all. The controls are simple: by holding one direction or the other you can advance time forward or draw it back. The characters’ paths along the level are predetermined and you can either fast forward or rewind time to advance them along their trail. This is easy enough to grasp in concept, and after the first level I was left wondering what challenges the game could create using this simple premise. The gameplay evolves and becomes exceedingly difficult as more and more aspects of the environment begin to be affected by the changes of time. These background objects necessitate a larger scale view of the map, and your focus must shift from the characters to the world, viewing every element as a part of a whole.

A third “interact button” occasionally turns trekking through time into a bit of a chore, but it also allows the game to construct increasingly complex puzzles. Arina and Frendt both have designated types of objects that they can interact with, and this turns more advanced levels into a long series of rewinding, pressing a button to see if it removed the obstacle ahead, moving forward, and rewinding if it didn’t quite work. If a puzzle is solved correctly on the first go-around, this rewinding time is diminished significantly, but being stuck in a time loop can become frustrating. Without the ability to interact with objects or parts of the world outside of these designated points, there is little to experiment, and you are left turning time like a record on a turntable.

This frustration is compounded by the speed at which you can control time. Several stages require careful tracking of small figures or objects bouncing in the background, or pieces of terrain shuffling past one another, but if you miss the key point that you’re tracking at any point you may have to return to the beginning of the stage. Unfortunately, the game rewinds so slowly that even having to do this once or twice can make a short level feel eternally long.

On one hand, this feels intentional: the slow pacing paired with the meditative score make each memory feel surreal and magical. There is a nostalgic reverence to not sprinting through fond, childhood memories. On the other hand, from a gameplay perspective, rewinding and fast-forwarding one segment for ten minutes because the puzzle pieces aren’t quite lining up creates a sharp contrast between the characters’ youthful joy and the player’s frustration.

Outside of my issues with how quickly I was able manipulate the flow of time itself, The Gardens Between offers a brief but sufficiently challenging and beautiful experience. While each of the design elements are wonderful in their own right, they are ultimately carried by the subtle and emotional story woven through each late afternoon video game session and backyard archaeological dig. Each stage turns a shared memory into an abstract, physical space, warping an imagined adventure through the lens of youthful creativity. The worlds of The Gardens Between create something that feels truly personal—intimate spaces that can be explored alongside Arina and Frendt.

The story unfolds, becoming more layered and emotional as the puzzling memories require more attentiveness and creativity to navigate, and by the end of it I was left wanting more. But much like afternoons imagining dragons flying around my backyard with my best friend, it had to end eventually.

The Gardens Between lands in a neighborhood near you on September 20th for PC, PS4, and Nintendo Switch.

– Mechanically slow, which can be frustrating when backtracking comes into play
– Some hidden collectibles exist in the game, but they do not earn you anything and are not tracked anywhere

The Gardens Between is available for purchase in the Humble Store.

Note: Game key for Nintendo Switch was provided by the developer. This had no bearing on our review.

The Gardens Between The Voxel Agents