6 min read
Add comment
FacebookTwitterRedditPinterestEmail
If you’re afraid of the sea, you probably shouldn’t play this game. If you aren’t, you will be after spending a few hours inside your walking coffin.

“Thalassophobia: an intense and overwhelming fear of the sea.” If you’re afraid of the sea, you probably shouldn’t play this game. If you aren’t, you will be after spending a few hours trapped inside of your walking coffin.

Narcosis, a first-person horror title by Honor Code Inc, introduces you to its mechanics (and its immense, clanging diving suit) in a serene, well-lit, indoor pool that wouldn’t feel out of place at a YMCA. Equipped with some gentle thrusters, emergency flares, and a small pocket knife for emergencies, you are tasked with running a few movement drills, but a visceral fear sweeps over the peaceful moments. From the safety of the pool, your vision blurs and you begin falling. Falling fast. Your face mask is blurred by rushing, murky water, and you find yourself on the ocean floor surrounded by wreckage and a weakly burning flare. You have no direction. No guidance. You are abandoned to the depths. 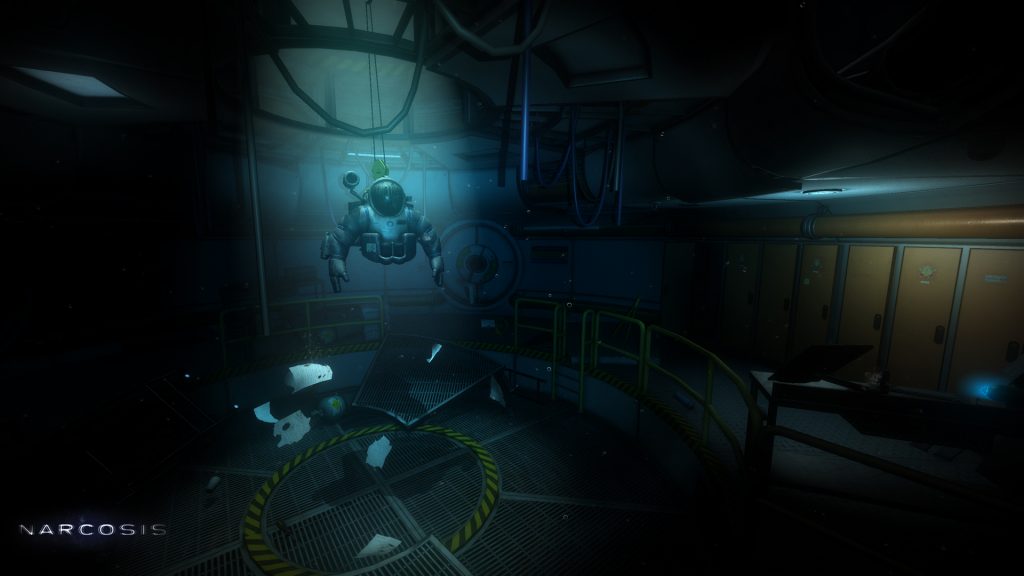 Your vision slowly clouds again only to return you to the safety of the pool for a short period. The clouds come and go, but when they part, you are left in the dark. During routine work on the exterior of the underwater station that you and twenty others call home, you’re caught in what becomes known as the Oceanova Disaster. An underwater earthquake damages your specialized deep sea facility, the rest of your crew does not survive, and you’re left to drift among their bodies that litter the wreckage. With these horrific scenes on display around nearly every corner, hungry creatures of the ocean on the hunt, and the risk of running out of air at the forefront of your mind (and your screen), the horrors of the deep, both physical and mental, easily wear on you and make for a pulse-pounding ride.

Throughout your desperate escape to the surface, Narcosis is able to blend its mechanics to the experience in order to create something dangerously immersive. As with any survival game, you are constantly in a fight for your life. There is an ever-present fear of being hunted by vampire squid, skewered by colossal spider crabs, or crunched by carnivorous fish, but unlike many games there is not a traditional health bar. Instead, the oxygen readout on your helmet, a wonderful in-world way of tracking your vitality, will deplete rapidly when under duress. This includes seeing the monstrous creatures of the ocean floor, floating past the bodies of your colleagues drifting the deep, or slowly falling into an abyss as your helmet cracks and shatters under the pressure. A warning message eventually appears on a loading screen: “running low on oxygen will cause audiovisual aberrations.” Early in the adventure, the stressors are fewer and further between. Your oxygen levels remain steady, but as you plunge deeper and the anxiety sets in for long periods of time, oxygen tanks become scarce, and the hallucinations take over.

Unlike other first-person games where you guide the character’s movement with one joystick and their direction of focus with another, Narcosis places you into the diver’s suit. Rather than operating a full body turn with one stick, you control the eyes inside the helmet. This means your HUD is only visible when you glance down to view it and isn’t an omnipresent, meta readout. With this design you can look around a corridor for small details all while moving straight ahead, but be warned: these details can be distractions and combined with the haunting loneliness and desperation, you may end up dead-end hallways that you knew should have ended in a new room. This more subtle form of movement also means you could glimpse abandoned dive suits moving out of the corner of your mask, or at least, you’ll think that you do. 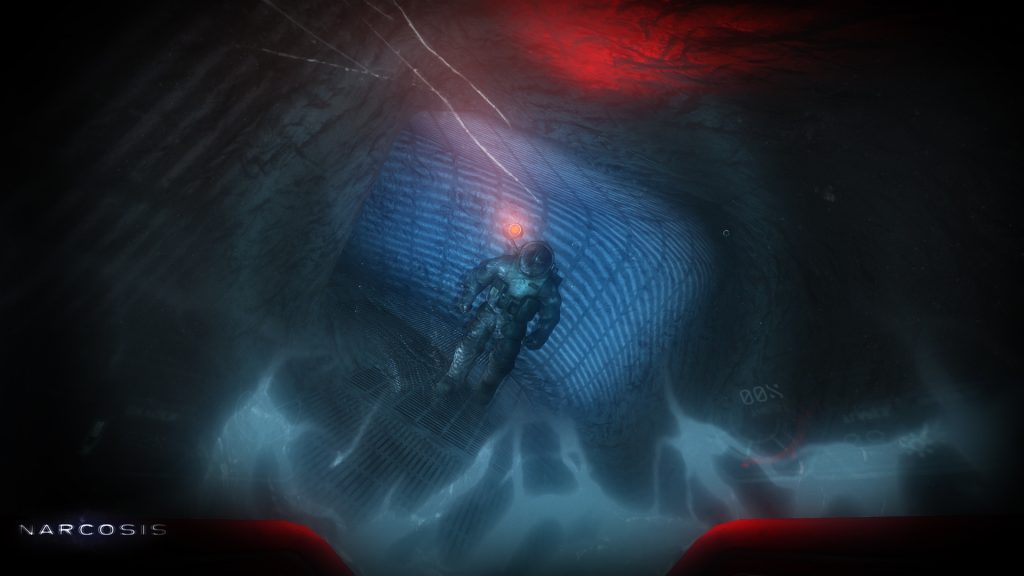 Embracing the realism of a deep sea venture means that combat in Narcosis is nearly non-existent. Your utility pocket knife is the only means by which to defend yourself from potential threats, but the timing of slashing at aggressive sea life before it latches to your face never quite feels consistent. The knife will occasionally clip through the creature without making contact. The unique movement mechanics, while interesting, can also feel unintuitive and take a bit of getting used to. These slightly clunky features, however, do not diminish the impact of Narcosis’ expert world development and storytelling. Through scattered ID tags and trinkets left behind by those you’ve lost, you’re able to form a complete picture of what life was like at the bottom of the Pacific, and the few abilities granted to you are put to good use in traversing the dangerous, otherworldly darkness of the ocean. The dreadful silence of the sea is filled only by the steady, metallic gong of your coffin’s footsteps and a narration that develops as your explore the seafloor.

The horrors of Narcosis can also be experienced in virtual reality, but even through my console experience, playing with a set of headphones on, I felt like I was inside the suit. I could not imagine the experience being more personal, and I’m terrified of what that experience may be. There were moments in my journey when I could not breath; moments when the panic of not being able to escape my own mind were so unbearable that I felt an overwhelming need to take off a helmet that wasn’t there. The ominous, low rumble of water and the fear of never escaping the base consumed me, and even as the credits rolled on the final screen, I felt uneasy. If you are ready for a dip into a truly harrowing experience, put on your suit and take a dive. 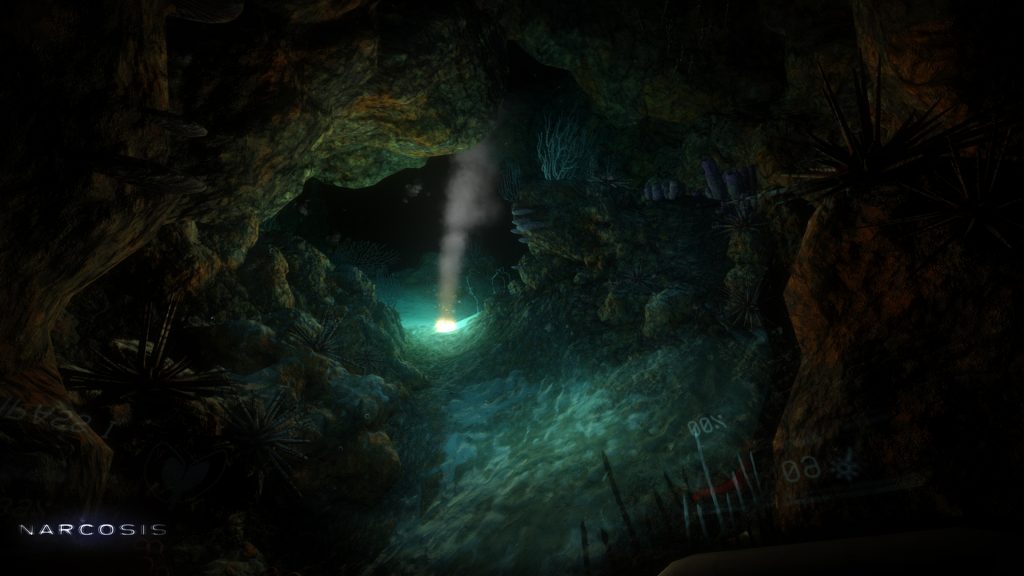 – Movement often helps to set the pace for the game, but it can feel a bit too slow at times
– Adjusting your field of view can also feel clunky and lead me to miss a few quick time events
– Fighting off the wildlife is made more difficult than it needs to be because of stiff mechanics

Narcosis is available for purchase in the Humble Store.