6 min read
Add comment
FacebookTwitterRedditPinterestEmail
The Legend of Zelda: A Link to the Past is quoted to be the biggest inspiration for this game, and even though it’s smaller, it still has the same formula and does not do wrong by it.

Blossom Tales: The Sleeping King has officially released on Steam and I’m glad it did. A few months ago I had the pleasure of demoing this game and was excited by my experience. The developer, Castle Pixel, brings us a fun, retro throwback to the 1990’s through the medium of independent game design. The Legend of Zelda: A Link to the Past is quoted to be the biggest inspiration for this game, and even though it’s smaller, it still has the same formula and does not do wrong by it.

The story opens up with two children, Lily and Chrys, wandering up to their grandfather to hear a story. The concept is not unlike that of The Princess Bride with the only difference being a brother and sister rather than a sick boy. So the grandfather tells them the story of a Kingdom, the Kingdom of Blossom, and the savior Lily.

Quickly after that the story begins and Lily is awoken from her slumber similarly to Link in Zelda games of the past. Today is the day of the knighting ceremony, so Lily rushes to the castle to become a Knight of the Rose. Once there, she is knighted and sent on her first quest – clear the rats out of the basement dungeon.

Unfortunately for the kingdom, as Lily goes to clear out the pests, the King’s own brother and court wizard, Crocus, betrays him out of jealousy. He casts a sleeping spell on the King which can only be broken by finding three magical alchemical ingredients in the furthest reaches of the kingdom. Lily takes up this task and heads out into the world. 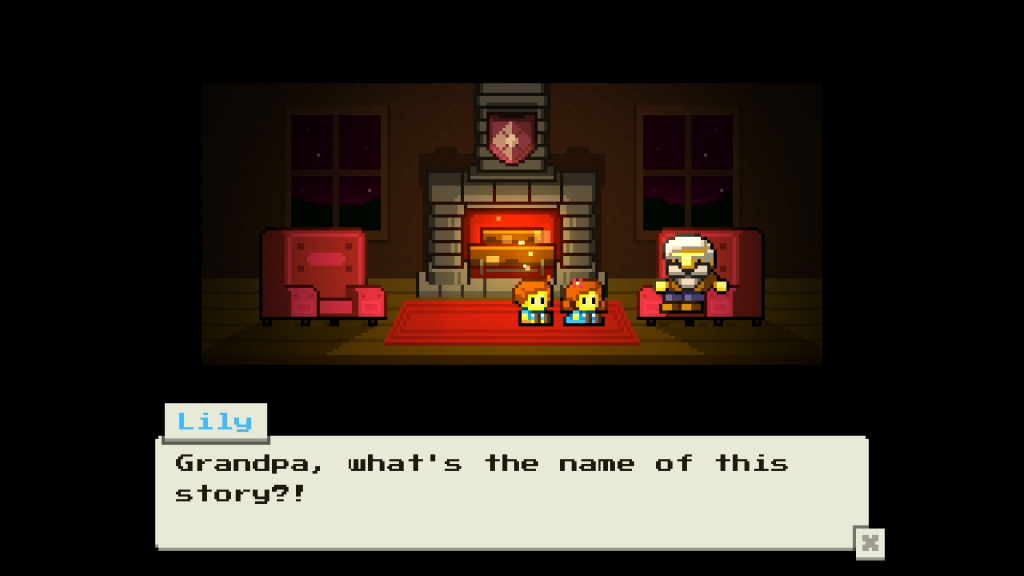 Blossom Tales is exactly what you’d expect it to be if I were to describe it as a “Zelda-like.” It’s top down and plays just like a classic Zelda game would. The world offers much to explore and as you travel you’ll encounter side quests and collectables to find. These collectables can be used to upgrade items or even to just sell for money. The side quests range from collection, to delivery, to even defending an NPC against mobs of enemies.

A key element to this game is the items you find to solve the puzzles in the overworld and dungeons. The game quickly gives you the bomb item and from there you’ll be blasting walls open to discover hidden mysteries and treasures. The magic system is straight out of later Zelda, specifically from A Link Between Worlds, where using an item uses some of your magic meter. The magic meter will regenerate rather quickly, and it will become even easier to manage once you acquire a few upgrades to lengthen the meter. Borrowing this design choice works well as it allows you to always focus on the objective rather than resource management.

Secret caves and areas are plentiful in Blossom Tales. The challenges many of them offer range from easy to quite difficult. There are a select few types of puzzles the game will throw at you, but each is quite refined. There were definitely moments where I had to stop and really think about how I would solve what was in front of me. The sense of reward is good, and it never felt like a waste of time. 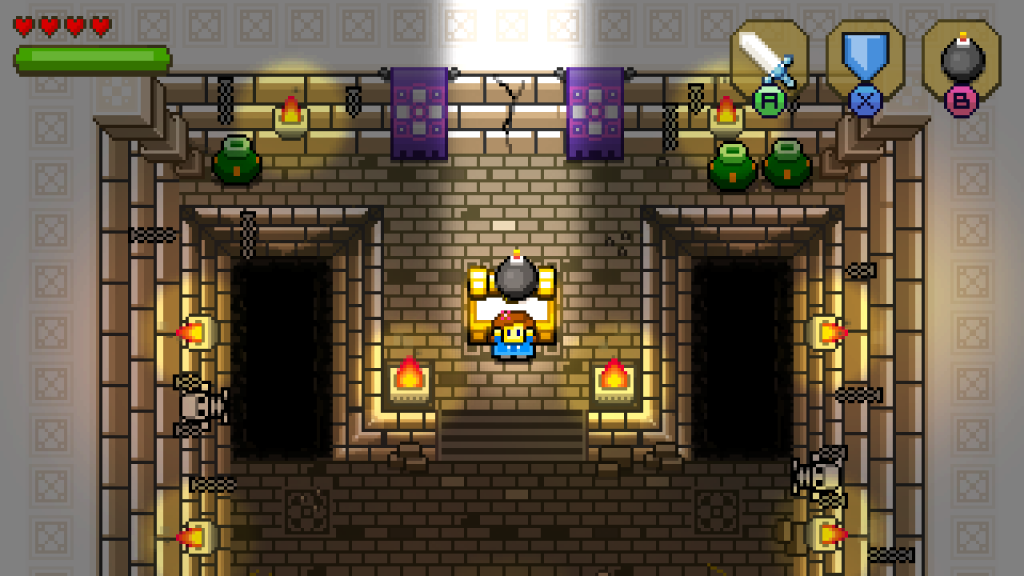 The dungeons don’t tread too far from the typical Zelda formula and linearity is especially there. They seem to be separated in chunks, clearing out the dungeon section by section until it’s all opened up and you can approach the boss. This isn’t bad as it’s striving to be a classic Zelda clone, but I think even many of those were less linear than this experience.

In the overworld too, you’re locked into which regions you can go to right off the bat. There is a clear path the player is supposed to take. It works well for the game though, as the areas scale with you from low to high. For the simplicity of the game, being fully open world might not have done as well, and instead this ends up feeling more like the linear Link’s Awakening for the Gameboy instead of A Link to the Past, which is pretty open ended after you complete a few of the dungeons.

Castle Pixel is described as, “An independent video game studio stuck in 1994 making high quality SNES games with today’s technology!” The game looks and feels like a game from that era, but at the same time you’ll notice subtleties that the SNES processors would not be able to portray, like extra particle effects. The color pallet seems to be more vast as well, but the art design is overall very similar to top down games such as Secret of Mana and A Link to the Past.

The color really leads to the theme of the game, where a Grandfather is telling a story about a hero to his two grandchildren. It’s made clear that this is a children’s story through the art, which complements the dialog in this way. Subtle effects such as flowers blowing in the wind or swirls of leaves blowing through the air really make the difference in the attitude of different areas of the game world. 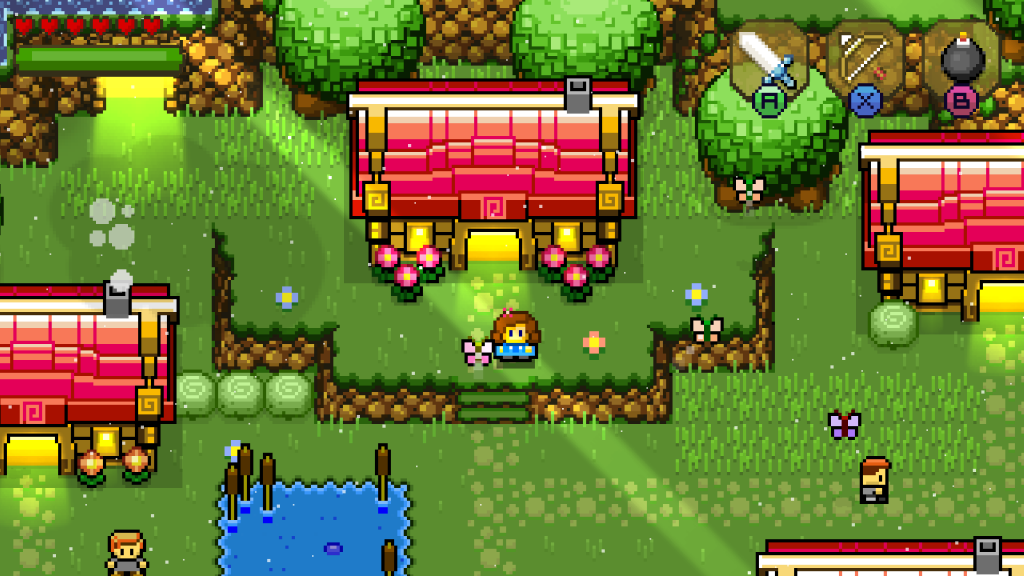 The soundtrack from the full release is much better than it was when the game was in pre-release. Each area of the world has a distinctive track and some of them are really quite good. Even the different internal zones of the world, such as shops and NPC houses, all have their own original tracks. My favorite track is Golem’s Haven, which is completely original, yet makes me really feel like I’m playing a Zelda game.

The sound effects are great too, giving good player feedback on when you take or receive damage, as well as environmental information.

+ Zelda fans will enjoy
+ Exploration is rewarded
+ Puzzles can be tricky, yet fun to solve