4 min read
Add comment
FacebookTwitterRedditPinterestEmail
The game is impressive at the onset with all aspects of the game feeling quite fresh and exciting. And while many of these aspects do hold up, the amount of gameplay progression regrettably slows down by the midpoint.

Rise & Shine combines the action of a classic side-scrolling “run-and-gun” game with shooting-based puzzles and many strong enemies to create a cool blend in mechanics. Whether its using cover to fight space grunts, guiding a slow-mo bullet through a maze or jumping from rock to rock, this game requires both a steady aim and some clever thinking.

The game is impressive at the onset with all aspects of the game feeling quite fresh and exciting. And while many of these aspects do hold up, the amount of gameplay progression regrettably slows down by the midpoint.

The game begins on GamEarth, which has just been under attack from aliens from NextGen (you can see where this humor is going). The first scene shows a distraught young boy in an orange hoodie standing among the ruins of his hometown city. His name is Rise and after witnessing the death of a friend, who is shaped like an alien from space invaders, he comes face to face with a giant city-destroying robot (that is conveniently marked as “lvl 999”). The game then cuts to 1 hour earlier where we are treated to the fateful encounter between Rise and Shine – a mythical and magical pistol with a smart mouth and the power to grant “infinate spawns”

The game is littered with references to classic and modern games, countless instances to break the 4th wall, and the dialogue is campy enough to keep things moving.

Rise & Shine hearkens back to the age of punishing and yet well thought out games, the likes of which seen on the Sega Genesis and SNES (albeit with wayyy more pixels). While the story is creative, fun, and purposely anticlimactic on multiple occasions, there is very little hand-holding when it comes to gameplay. Players need to be observant of there surroundings and will more often than not need to cast caution to the wind to try out different ideas. This, however, is what makes Rise & Shine more bearable – While Rise can be killed instantly by most things, Rise has infinite, almost immediate, respawns with many invisible checkpoints per level.

Most levels scroll left to right with variations in the amount of platforming required to get through. Along the way are either enemies that need to be defeated, traps that need to be avoided or puzzles to be completed. And blood, plenty of blood.

Throughout the first few levels, upgrades for Shine are discovered and new enemies are shown off. However as the game progresses, fights with enemies become less about strategy and more about dying enough times to muscle your way to the next fight. Most upgrades are collected by the first chapter and Rise’s abilities to run and jump don’t expand at all. 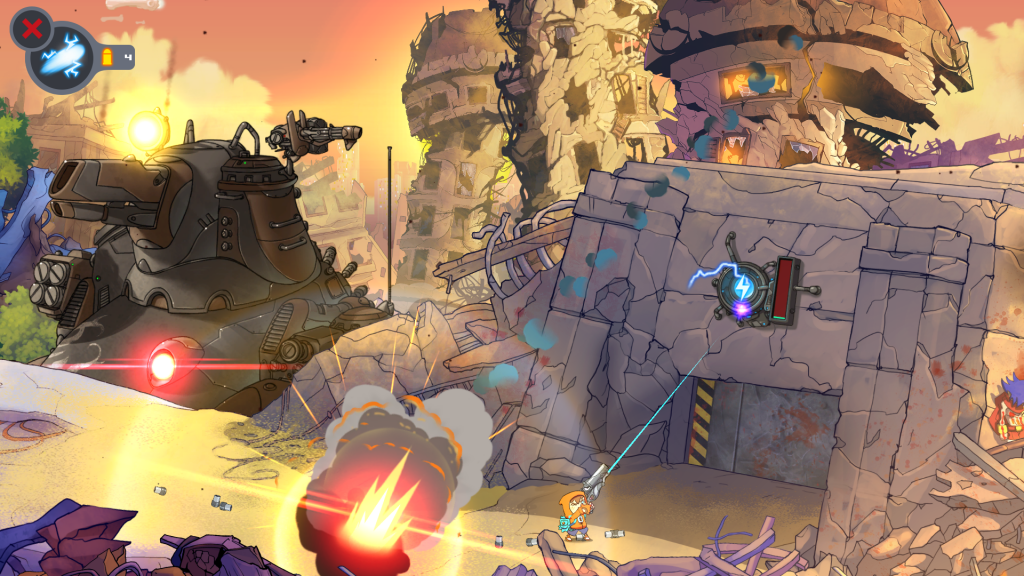 Right off the bat, I would recommend that if playing PC, to remap the aiming button to a key on the keyboard unless you have a very ergonomic mouse. Default controls set the aiming to the right mouse buttonwhich I found to be taxing on a couple different mouses that I used. That preference aside, the game handles quite smoothly and doesn’t feel overwhelming despite the variety of mechanics that the game offers.

The game’s graphics are well done and add great flare to compliment the gameplay. Landscape graphics are massive and span the entire length of levels (as opposed to scrolling separately or repeating) and they look awesome. Environments are rich with detail. Animations are smooth but certain effects such as Rise’s running animation look deliberately clunky – must be a stylistic choice. While the game isn’t super gorey, there is quite the exaggerated amount of blood and Rise has a handful of death animations that are less than pretty.

Exposition is told mostly through still-frame images that feel like watching a comic unfold. These are well done but don’t deviate much from the the in-game visuals.

Sound effects are decent and most of the music is simply background music to set the mood. There aren’t any super noticeable themes throughout the game. 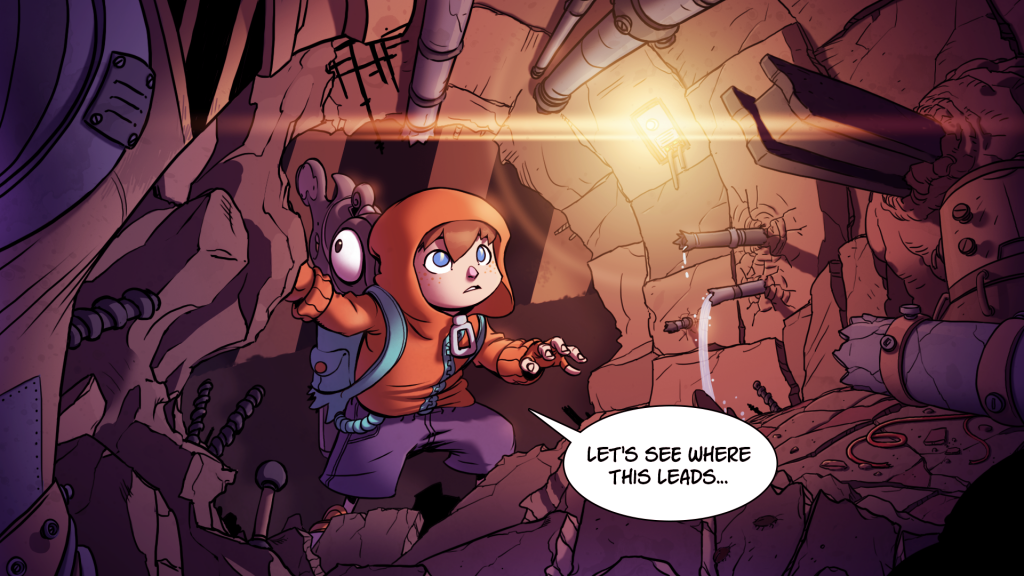 Rise & Shine is a game worth playing for those who want to trudge through a good looking puzzle-platformer with gun mechanics and don’t mind having to do the same things over and over again. There is fun to be had both in the game itself and the countless references all over the place if you can handle the punishment.