It’s been seven years since the Darksiders franchise took to the previous generation of consoles, and even now it’s a criminally underrated series packed full of third person, action-adventure gameplay. Between the remastered visuals and the bargain basement price point, Darksiders: Warmastered Edition is a must-play. Fortunately for many of us, you can buy copies of Darksiders from online retailers that sell used video games.

Ever since the demise of game studio THQ in early 2013, Darksiders fans were left unfulfilled by a gaming franchise that promised more. A third person, action-adventure game built around the legendary story of the Four Horsemen of the Apocalypse, there was an implied sense that each Horsemen character would get their own game. Sadly, only two games were released before the IP was acquired by Nordic Games in 2013, and fans have all but lost hope for any sense of closure.

However, the remastered original Darksiders – dubbed the “Warmastered Edition” – is a welcome update to the original game that improves the graphical and audio experience while maintaining the quality of gameplay fans remember from the original game. During a time when a glut of first-person shooters and MOBA-type games dominate the landscape, this remastered edition of Darksiders is like a breath of fresh air. 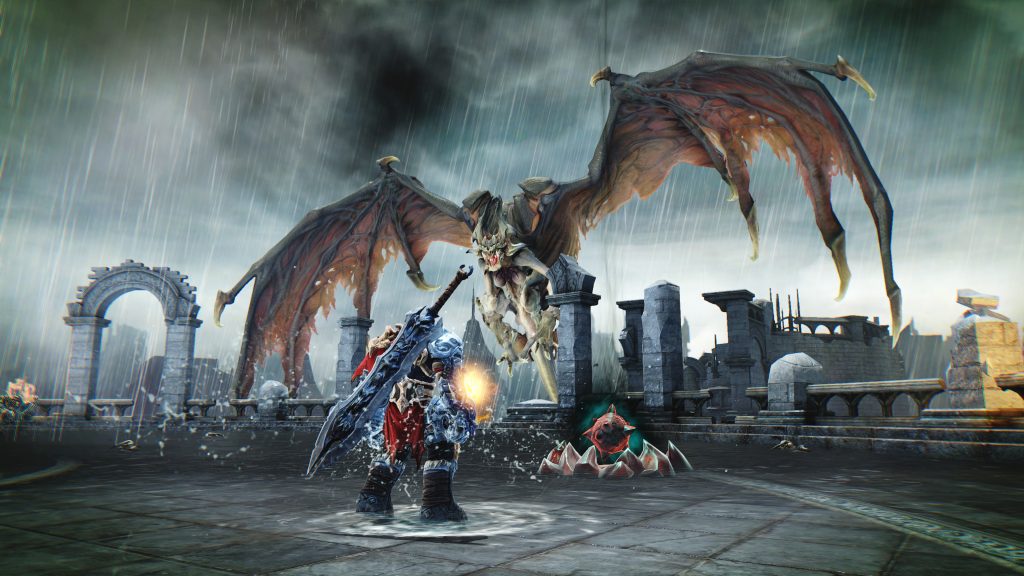 That is the general context of Darksiders, where players assume the role of War – the first Horseman. Summoned to the Kingdom of Man, War quickly discovers that the seventh seal was not destroyed. Appearing to act on his own, War is quickly reprimanded by the Charred Council and his powers are stripped from him. Now accompanied by a demonic companion only known as “The Watcher”, War must now atone for his presumptuous sins by carrying out a series of tasks and discovering the identity of whoever is behind this engineered attempt at jumpstarting the Apocalypse. 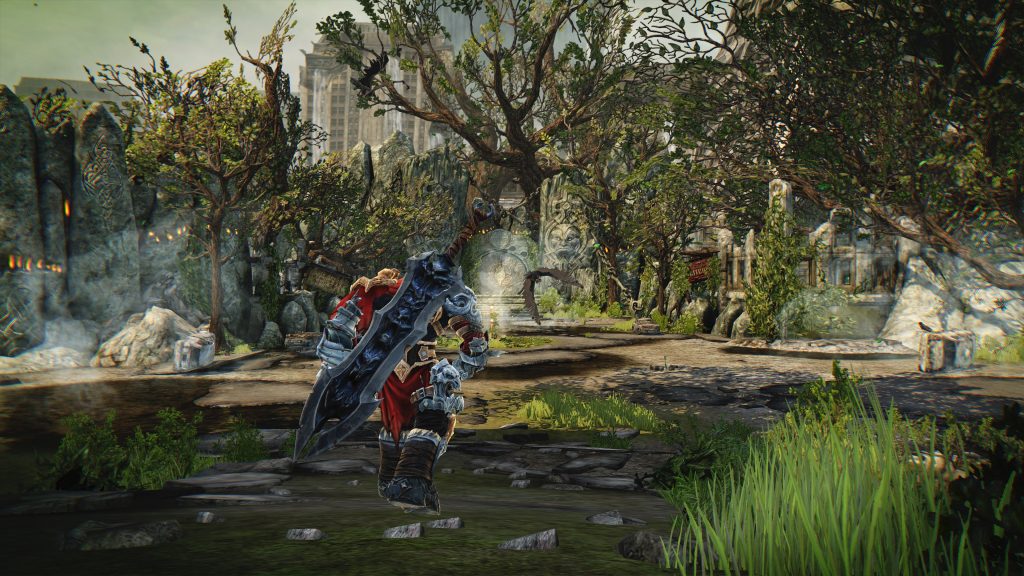 The gameplay of Darksiders is very familiar to the modern gamer. Similar to the fight mechanics of the Devil May Cry and God of War franchises, Darksiders mixes this action with light RPG elements and explorative elements reminiscent of Zelda games of the past. Combos and special attacks are encouraged to inflict maximum damage, and skill in this regard is rewarded through the in-game orb system. These orbs replenish life, power the special gauge, and act as a currency system to upgrade items and abilities.

The exploration aspect is best characterized as a “limited sandbox”. While players are encouraged to explore every nook and cranny, the expansive environment feels confined once you realize your limits. There are secrets to discover and chests to open, so retreading steps after gaining a better perspective is highly encouraged.

Overall, gameplay is satisfying yet simple. War “feels” heavy and powerful, which matches his on-screen persona. This is not something easily accomplished, and is readily conveyed upon playing the game. 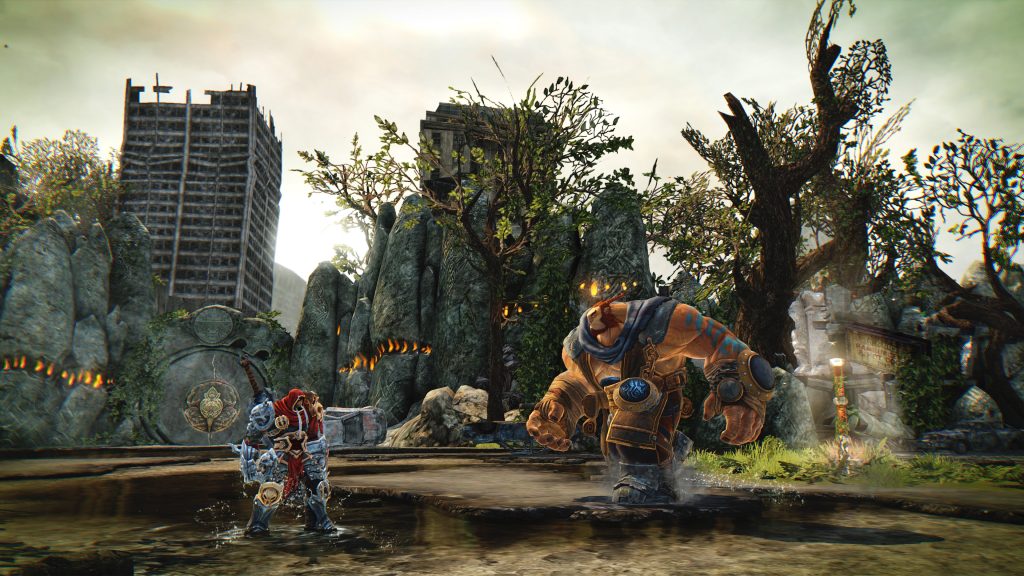 By far the biggest upgrade to the Warmastered Edition are the graphics and sound. Running at a full 1080p with 60FPS, the game looks as gorgeous and sharp as one would expect from a remastered game. Lighting and shadow effects are also influenced, giving the game a clarity that was absent from the original game.

As for the sound work, it is crisp and beautiful. While I am admittedly not familiar with what a demon sounds like while being cleaved in two by a massive sword, I would imagine Darksiders does a faithful job of recreating said sound. My experience through this game was a mix of 5.1 surround sound speakers and Turtle Beach headsets, and the sound through both was equally as immersive. The voice acting was also superb: while not necessarily a new addition to the game, getting to hear Mark Hamill go full Joker as The Watcher was a fun and entertaining break from the constant slaughter of enemies. 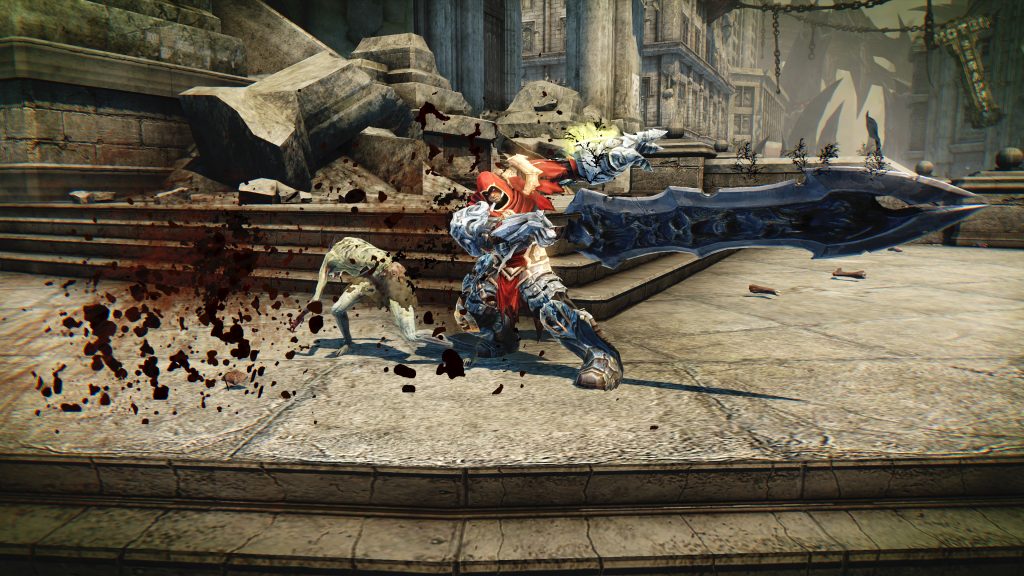 While overwhelmingly positive, there were a few downsides in the graphics department. As with almost any third person perspective game, camera angles can often be a player’s worst enemy: Darksiders is no exception. Frustration was further amplified by boss encounters where graphical glitches occurred during critical moments. As a personal observation, these seemed to only increase as the game carried on, and became more common during late-game play.

With a bulk of the work clearly going into the graphical upgrades, I expected a bit more from a remaster of such a dated game. With that being said, what did work was displayed beautifully and was satisfying – albeit short-lived.

Darksiders is criminally underrated. It does not benefit from a well-known pedigree, and yet is deserving of its own notoriety. The mix of action, adventure, and light RPG elements is addictive and delightful, and the remastered aspects of the game are just enough to put it over the top in the current generation of games. Coupled with its bargain basement price point (just $19.99 on the Xbox and PS Online Stores at the time of this writing), Darksiders is a must-have game.