4 min read
Add comment
FacebookTwitterRedditPinterestEmail
Wondershot is a top-down, multiplayer-focused, party game. The controls are simple and responsive and the rule is quite straightforward: “one shot and you’re down.”

Wondershot is a top-down, multiplayer-focused, party game. The controls are simple and responsive and the rule is quite straightforward: “one shot and you’re down.” Four players can go head-to-head and use one of four weapons. Each weapon has its own special ability, which is especially useful with the constantly shifting map environments.

Wondershot provides the first interesting local multiplayer I’ve seen in a long time. Outside of “adventure” mode which consists of Time Attack, Survival and Brawl “challenges,” and “Endless” mode there is basically not much to do, no story, no real unlocks aside from other maps, and an exp bar that has no real purpose. It’s pretty much all about the multi-player. That being said, this game’s multiplayer brings me back to my childhood days of competitive couch co-op (or friendship destruction). 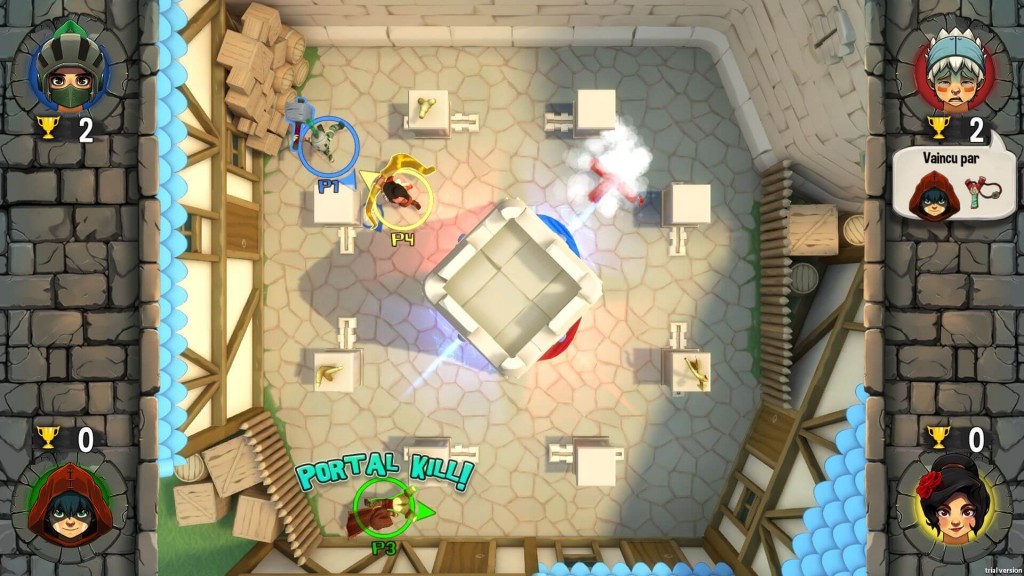 There are four nameless characters to choose from, all of whom seem to be female and none of which have any special powers. There are four weapons available: a hammer, bow and arrow, boomerang, and slingshot, which all do different things depending on how long you hold the attack button down. For example, a simple press of the attack button with the bow fires a slow homing arrow, but if you hold the button down, it fires a fast straight shot. It can be pretty challenging to learn what the most effective way of using a weapon is. There are also five power-ups to go along with the gameplay: Super Speed lets you move faster, Phantom lets you walk through walls, Super Shot lets you shoot through walls, Slow Motion slows time (which really helps due to the fast-paced nature), and finally Shield which makes you invincible. There are also portals used which you can either walk through and come out the other side or use a weapon to do the same and attack. With characters and weapons going in and out of portals, it becomes tricky to manage with everything else going on around you.

The idea of a “one and done” battle is hard to fathom being entertaining, but this pulls it off very well, allowing you to customize your battle if you’d like or play preset modes. These modes include one hit and you’re out, points scored per player hit, fighting on an impossibly tiny map, or completely customize it yourself. Unfortunately, there is currently no online option, so in order to duke it out against other people they’ve got to invade your living room. If you’ve got a full family or friends and four controllers, however, by all means lose yourself in this game. For as simple as this game is visually and technically, it gets very addicting very quickly. Little to no skill is really needed as I found out with my roommate bashing the attack button and quickly knocking the other three of us out with the boomerang. The more you play though, you begin to pick up on how things work.

The visuals, being a top-down game, don’t give much detail to what the characters, enemies, or weapons really look like. However, the loading screen and menu backdrops show you exactly what was being envisioned with crisp, clear, and at times humorous illustrations. One of my biggest pet peeves with games are backgrounds that have too much movement because they distract from what you’re trying to do, but luckily there is minimal movement here. 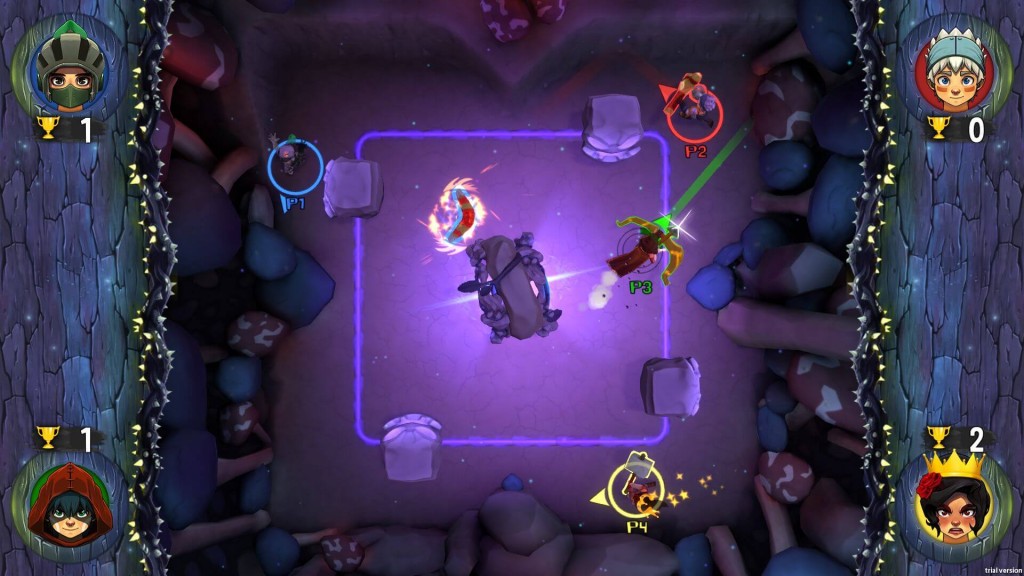 The music is very cartoonish and focused on an adventure style, which isn’t bad at first, but after a while it gets to you as my wife asked me to turn it off several times while playing. Menu sounds are just generic swoosh and thud sounds when advancing or backing out of menus. There are a few taunts each character uses in character selection, most of which are famous movie quotes done in weirdly-pitched voices. “Tonight we dine in hell” and, “You talking to me?” are just a couple, but sound so off with the odd voices.

+ Fun and competitive multiplayer
+ Under 1 gig of download space used
+ Easy to jump into, no long setting up time