The Flame in the Flood – game review

7 min read
Add comment
FacebookTwitterRedditPinterestEmail
While the numerous bugs can hinder your experience, I encourage you to power through because The Flame in the Flood is a charming, welcome change to the typical survival game.

The Flame in the Flood is a rogue-lite river journey through the backwaters of a forgotten, post-societal America. Forage, craft, evade predators, and stay ahead of the rains as you make your way down the procedurally-generated river.

The first game from new studio The Molasses Flood, The Flame in the Flood is the story of Scout and her canine companion Aesop. Together, you sail on a raft down a treacherous river in post-societal America, stopping at various types of locations to restore your supplies, craft new items, and hunt the local wildlife before they hunt you.

Aside from that, the story in campaign mode is fairly thin. You’ll encounter a few narrative points as you move along the river that will give you enough information to move on the next one, and your final destination will offer some closure, but not quite enough explanation for my liking. On the positive side, the campaign mode does provide a clear end point, which can be refreshing for people who feel overwhelmed by the endless nature of some survival games. 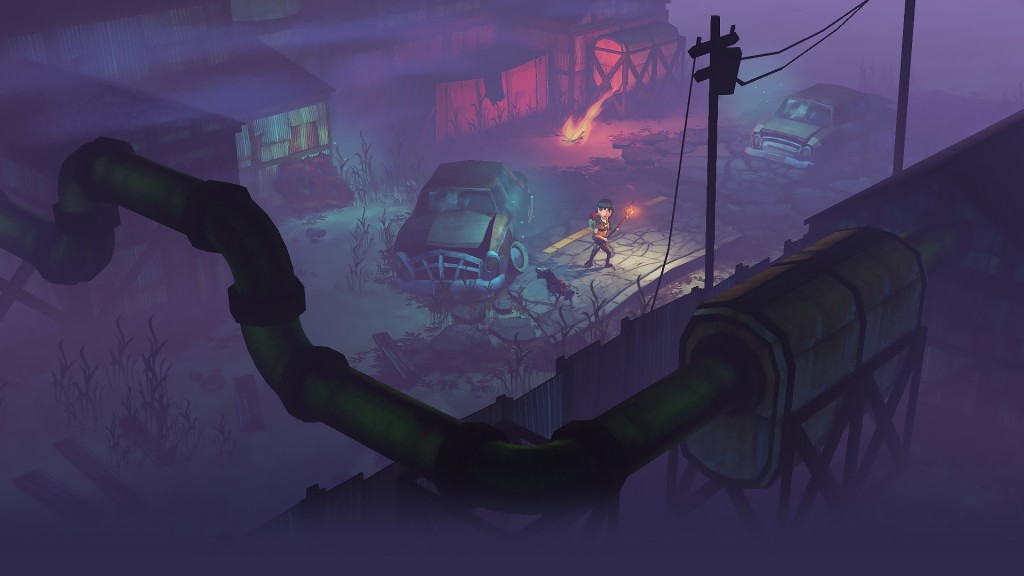 Whether you choose Campaign or Endless mode, gameplay remains the same. Hop in your raft, progress down the river avoiding obstacles, dock at one of several types of areas, gather resources, and repeat. Like many survival games, you have a handful of meters to keep in check as they slowly drain: Hunger, Thirst, Body Temperature, and Fatigue. Eating food refills your hunger, drinking clean water refills your thirst, crafting new clothes and sitting by fire refills your body temperature, and sleeping refills your fatigue. This all sounds simple enough, but there are times when you might not be lucky enough to find the things necessary for your survival. I say “luck” because sometimes it felt like no matter how well I was doing as a player, sometimes the resource or area I needed just never surfaced in time. This is less related to the survival meters and more to some of the injuries and ailments you might acquire along the way. Mistakes can result in lacerations, broken bones, or poisoning that all require your attention if you plan on continuing your journey.

Unlike other modern survival games that seem to be on a trend of using a permadeath mechanic (you die, you start from the beginning), The Flame in the Flood is more forgiving in that you can jump back to a previous checkpoint and resume from there. After playing some other survival games for hours on end and occasionally becoming frustrated with how much time I felt like I lost after dying, a checkpoint system was a welcome addition.

The crafting system isn’t too complex for the casual gamer, and you’ll learn almost all the recipes you’ll need within a few hours of playing. The actual process of crafting, however, can drag after awhile due to a menu system that could use some streamlining. Even with the quick links on the side that give faster access to some items, having to go into the backpack every time to craft anything or manage your items can become tiresome. Having an open backpack as a side or bottom bar listing your inventory could have made this process much simpler, but also safer as the menu covers most of the screen but doesn’t pause gameplay. As a result, if you’re not careful you could get attacked while trying to put together those stylish rabbit pelt pants you want so badly.

Along the river, you’ll be able to dock at many different types of areas, each unique in design and containing a variety of resources, the likelihood of which increases based on area type. For instance, you’ll always find a workbench at a broken down hardware store, and you’re more likely to find nuts ‘n bolts and old lumber. Choosing which areas to visit also adds strategy, as you’ll have some tough choices to make because you can’t stop at every location you see along the river. Since the river is always moving in one direction, you’ll never be able to get to both the camp on the left and make it across to the marina on the other side. Being a completionist, this aggravated me when I first started playing, but I soon accepted it as a mechanic of the game as I continued on. 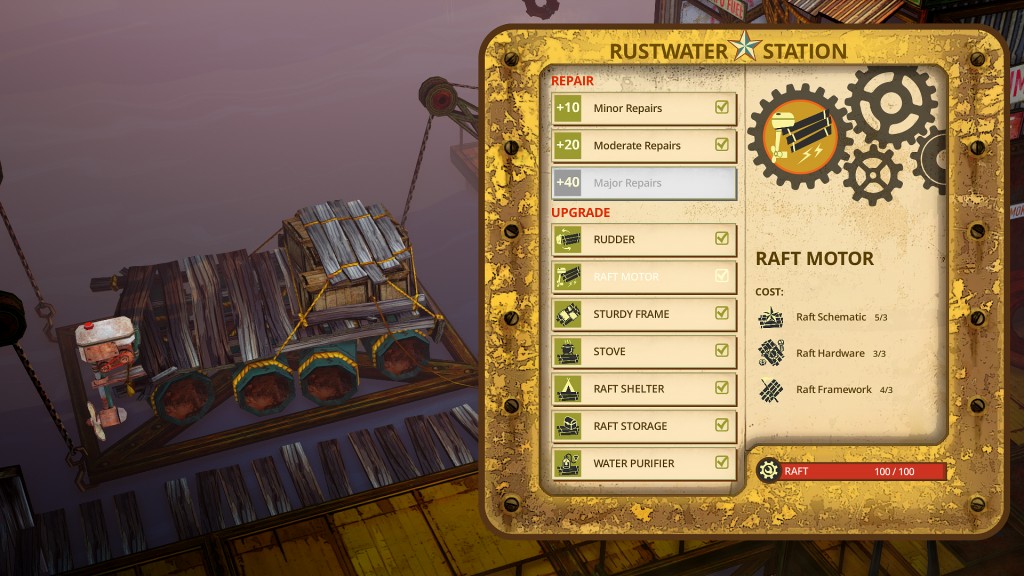 Your raft can also be upgraded to add a rudder, more storage, an onboard engine, and many other conveniences. These aren’t completely necessary for the campaign mode, as I added my last upgrade right before I entered the final area of the game, so I never actually got a chance to use it, but they do make things much easier in the endless game.

After playing the game for awhile, I began to feel like I had mastered most of it and entered into a maintenance state, which ultimately became a good thing and a bad thing. On the negative side, I was grinding through to keep my stats up and see how far I could go, which wasn’t as much challenging anymore as it was simply a time commitment. On the positive side, the combination of the art style, music, river sounds, and task repetition became almost meditative and I settled into a very peaceful, zen-like state.

Despite all the positive aspects of the game, at its present-state it’s mired with bugs, some of which are game-breaking. At seemingly random times on the river, I would get a “not responding” message followed by the game crashing. There are quilts in areas with messages that can be read, but I began to avoid them as half the time they would lock-up the game if accessed. Clicking on the raft to activate it sometimes requires leaving the screen and returning to complete the action. Also, wolves and bears would occasionally get stuck in place. This can be a blessing when you can walk right up to a wolf and kill it, or a curse after you’ve set up 4 spear traps and a bear won’t leave its cave or even move at all.

The art style present in The Flame in the Flood is just one aspect of the game that makes it an experience worth having and returning to. The characters are charming, the animations are fluid, and at times I got lost in watching the sun shine on the surface of the river because it was so beautiful.

I was surprised at first that equipping new clothing options didn’t change Scout’s appearance, which could have helped to remind me where I needed to improve when I started to get cold instead of having to check what was equipped in the menu. 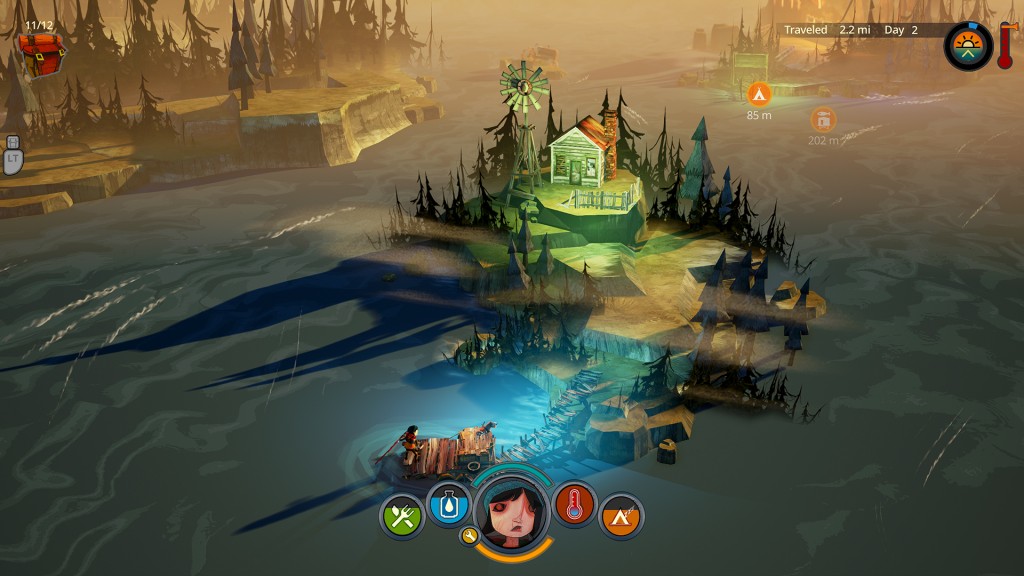 The soundtrack for The Flame and the Flood also stands out as a major highlight. The studio wisely sought out acclaimed Alt-Country rocker Chuck Ragan to create a completely original album to accompany you on your journey. The resulting music masterfully intertwines with the visuals, symbiotically setting a tone that adds to the previously-mentioned zen-like state.

Sound effects are not only on point, but necessary for survival. Cracks of thunder accompany a downpour, the howl of wolves and hiss of snakes provide fair warning for incoming dangers, and a quick guitar twang makes item crafting a touch more satisfying.

While the numerous bugs can hinder your experience, I encourage you to power through because The Flame in the Flood is a charming, welcome change to the typical survival game.

– Loaded with bugs, some of which are gamebreaking
– Music tends to disappear often
– No key remapping available

The Flame in the Flood The Molasses Flood