3 min read
Add comment
FacebookTwitterRedditPinterestEmail
The run n’ gun shooter is a genre that is victim to a lot of “doomsday hyperbole.” If Assault Android Cactus is any indication, the genre is healthier than people give it credit for.

The run n’ gun shooter is a genre that is victim to a lot of “doomsday hyperbole.” If Assault Android Cactus is any indication, the genre is healthier than people give it credit for.

Assault Android Cactus is a combination of Mega Man and Ikaruga with a dash of Smash TV. The plot, like most games in this genre, is pretty straight forward; A bunch of environmentally-themed robots have decided to rebel against humanity and it’s up to the titular green-haired heroine, Cactus, to stop them by any means necessary.

Unlike most shooters where you perish after catching one stray bullet, Assault Android Cactus ’s approach adds some welcome complexity to the usual rules. Cactus and all of her playable, unlockable sidekicks have a battery gauge that is constantly depleting. Only by switching up your tactics along with your android’s two main weapons will you bump the score counter high enough to spawn another battery along with the color-coded power ups that alter the battlefield. This becomes especially frantic during boss fights where one mistake will have you fighting a battle of attrition that usually ends with a game over screen. Thankfully, trying again is easy since you have unlimited continues, but the urge to play through and do better with a different android or simply stay with Cactus will linger in the back of your mind as your deaths mount up. 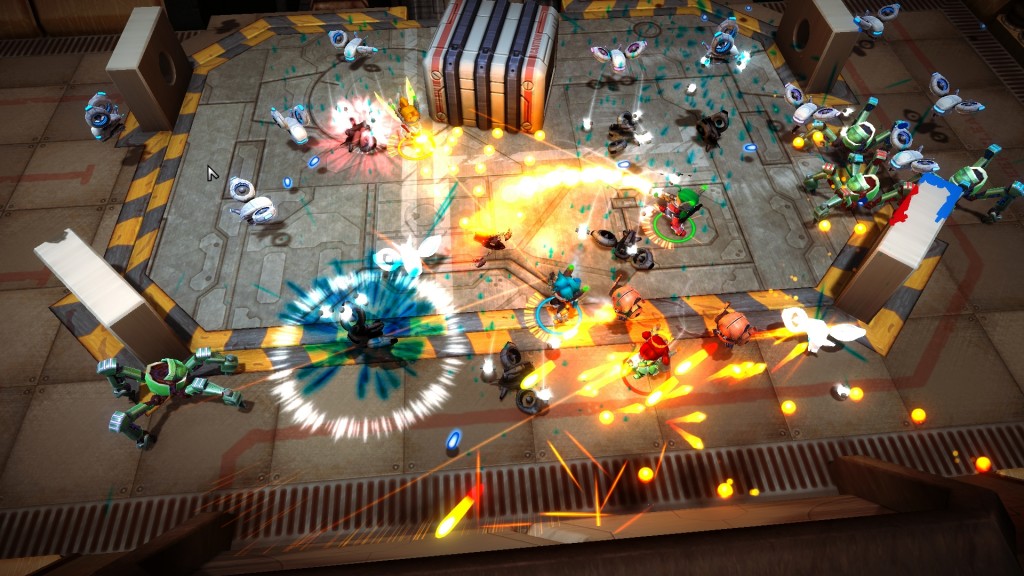 The music is about what you’d expect from a fast-paced game like this, however it is worth mentioning the hilarious little jingle that plays when you fail. Those who are patient enough before retrying will likely have it stuck in their heads… it’s that much of an ear worm. What may catch some players off guard at first are the various voices that come from the controller’s speaker. Depending on the android you’re controlling, you’ll hear something different. Cactus is confident, rebellious, and heroic whereas Lemon could be considered commanding and direct. No matter which of the many unlockable characters you play as, none of them play the same and all of them have massive score potential once you get used to what makes them unique.

The game supports two player co-op, which changes the landscape significantly. Both players share a battery, so if it drains, you’re both kaput. You also have to work quickly as a team as the camera can only pan out so far. If one player decides to play renegade, it will lead to a lot of unnecessary retries. With that being said, I had a blast with my friends once we started working together instead of against one another. The different weapon combinations between the playable cast is a sight to behold. 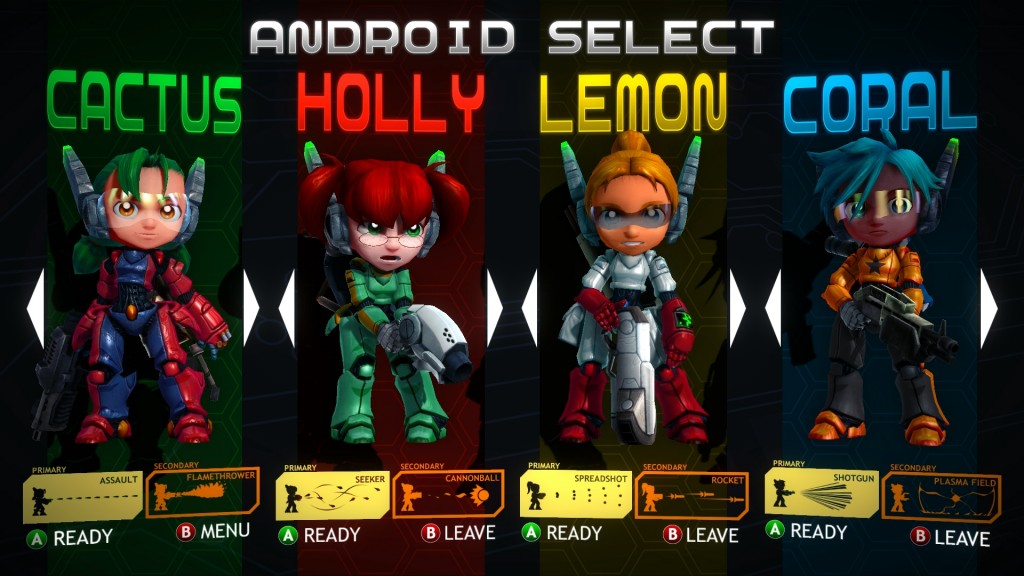 This game doesn’t have much working against it. It’s fast, fun, cooperative and easy on the ears. Minor issues exist like score pellets looking too much like enemy bullets and a sometimes wacky camera during co-op, but it does not detract from a fun addition to the run n’ gun shooter genre. In fact, I almost missed this review’s deadline because I was stuck on a boss fight.