4 min read
Add comment
FacebookTwitterRedditPinterestEmail
Sadame simply translates to “Fate” in English, and that’s what this eastern beat 'em up RPG is all about.

Sadame simply translates to “Fate” in English, and that’s what this eastern beat ’em up RPG is all about. Be it the luck of the draw on the randomized loot you’ll be picking up, or the branching stories between each character, this titular theme will be prevalent throughout your entire playthrough, as it was mine.

I played through Sadame as the Samurai Warrior melee class, which does affect the story. Each character has a similar, but unique experience when playing through the story mode of the game.

I will say the story was a little bit hard to follow for me, primarily because I was focusing a lot more on the action than the premise, but from what I gathered in the beginning, it takes place during the wars of feudal Japan. Demons have infested Japan and are at war with Humans and your goal is to eradicate the demons who are destroying innocent villages in their war.

The story expands as you proceed from level to level, eventually from act to act, and the fate of the heroes starts to unfold. 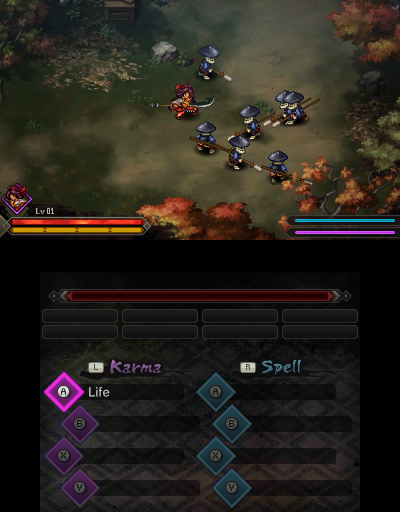 A huge influence in the style clearly comes from the Warriors series, such as Dynasty Warriors and Samurai Warriors. However, this does not stop Sadame from being a very unique experience in its own right. As you slay hordes of demons you’ll level up, find new equipment, and even fight terrible demon bosses at the end of each level. The bosses are very fun both to fight and visually, though I did find many of them easy.

Through my playthrough I focused heavily on melee combat and advanced my warrior’s strength primarily while developing the skill tree the game offered each warrior. The other skills you can expand upon include Ki, Defense, Spell Damage, and HP. On top of the skill tree, there is an elemental skill tree to enhance the power and techniques of the elements fire, water, metal, earth, and wood. This game really surprised me with the vast levels of customization to each character, and I never got bored once while experimenting with the customization.

As is typical in this style of game, your items are shared with other characters you play. After one playthrough of the game you can start a new character with a completely different playstyle, but start out with weapons and armor you accumulated through your original character. Your older characters can even be used as support characters, improving your chances of survival in a second, third or fourth playthrough.

The level design features varied visual environments, however, they do all unfortunately amount to the same formula of: fight enemies, walk to next screen, repeat. This does slightly take away from the overall game, but it’s also something I was expecting considering the genre of game.

The aesthetics of the game were actually quite pleasing. The art style is very inspired by feudal Japanese culture, as well as old-school pixel art. The characters have a solid “anime” feel that really fits into the action-packed gameplay this title offers.

All the enemies are inspired by Japanese lore, such as the Kappa sea monster, and the traditional appearance of bead-wearing, red demons. The enemy variety in terms of style was a cool touch and it helped to make each level feel unique in a visual aspect.

The game wasn’t censored in any way either, so we get the full visual experience in the west, which is always a nice bonus and something to note when seeing a Japanese game find its way to western audiences.

Unfortunately, this is one area where the game did fall short. The music at first was great, feudal Japanese-sounding songs you’d think of when seeing the art of the game. However, the music doesn’t vary much from that theme, and many times you’ll noticeably hear the looping soundtrack, even during a level.

The sound effects do come in handy during gameplay though, giving you solid feedback on damage inflicted on the hordes of demons.