As the first major game by developers at Rotten Mage Games, Spacejacked is a retro-inspired tower-defense game that combines strategic weapon placement along with high-speed alien blasting. Take control of space-engineer Dave as he uses various turrets and his trusty blaster to defend multiple rooms simultaneously from alien attacks. 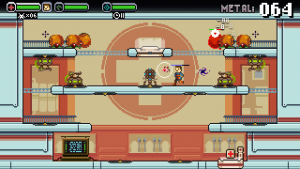 Gameplay is simple and largely consistent between game modes. Dave is able to outfit each of the ship’s rooms with 3 types of turrets to attack enemies. The gun turret shoots quickly, the stasis turret slows enemies down, and the laser turret does heavy damage. Building each of these consumes a resource simply called “Metal” which can be collected by killing aliens, dismantling intact turrets, or from the Metallius mini-game in story mode. Dave also wields a blaster which allows for more intrinsic control by adding firepower where the player needs it. Dave also wears an antigravity suit that allows him to walk on the ceiling and the floor – which eliminates the need for precision jumping and platforming.

Space technician Dave Paprovsky has been called aboard Dr. Scott’s space ship to serve in his first ever space mission when suddenly aliens attack and capture 3 of the ship’s crew members. In their pursuit to rescue the crew, Dave is tasked with destroying waves of aliens that warp their way onto the vessel. The story progresses day by day and choices such as resource use and turret placement made in one day last through the following days. The closer to their goal, the tougher the enemies become. The story is both detailed and succinct making it enjoyable without taking away from gameplay. It features plenty of sci-fi references and one-liners to keep things entertaining. And it may have even set itself up for a sequel.

Like most tower defense games, Endless Mode relinquishes all story elements in favor of quick gameplay and quickly rising difficulty. In this mode, waves of enemies attack in sequence with little break in-between them. Dave’s resources are limited and the absolute goal is to last as long as possible.

Spacejacked features a list of challenges unlocked via the story mode. These challenges are set scenarios that pit Dave against specific enemies with limitations in place (i.e. no blaster, unrepairable cores, tough enemies). The better one does at completing the challenge, the better ranking one will receive. Completion of each challenge awards an achievement.

The game can be played with just the keyboard or with a game controller. With only a need of 4 buttons for movement and 2 for interactions, I was more than comfortable with standard controls. The game is fast-paced and controls are both responsive and fluid. 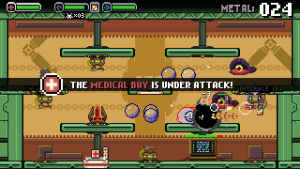 In homage to tower defense games of the past, the characters of Spacejacked are rendered in sprites. Despite this choice, each character is vividly designed and fluidly animated despite their pixelated appearance. Dialogue is shown in boxes that appear on the screen with more detailed mugshots that show both speech and emotion. The HUD is easy to keep track of and does not get in the way of gameplay.

The soundtrack, developed by SawSquareNoise, is a compilation of catchy and detailed chip-tunes that feels right at home with the retro graphics. While it is limited in selection, it certainly makes up for it in quality.

+ Fast gameplay.
+ Easy to pick up and put down.
+ Challenging with a good difficulty curve.
+ Simple, yet detailed story.
+ Can be played on low-end machines.
+ Many well-placed sci-fi references

– Blaster upgrades are a bit expensive and aren’t available until halfway through the story.
– Metal harvesting mini-game does not change throughout the story limiting what can be collected.
– A missed opportunity for Co-Op gameplay.