4 min read
Add comment
FacebookTwitterRedditPinterestEmail
Paper Monsters Recut is an adorable platformer that loosely combines the pace and feel of Little Big Planet with some inspiration from the Donkey Kong Country series and Yoshi’s Island games.

Paper Monsters Recut is an adorable platformer that loosely combines the pace and feel of Little Big Planet with some inspiration from the Donkey Kong Country series and Yoshi’s Island games. Originally a mobile device game, Mobot Studios “recut” (pun intended I’m sure) and upscaled the game for Wii U. The game opens as Paperland is overrun by evil monsters and it’s up to the hero character to transverse Paperland and defeat monsters and bosses along the way.

There’s no rush at all in this game. With no timer, slow moving enemies, and a floaty character, Paper Monsters Recut appeals to gamers who want a break from high-paced platformers like Mario and Sonic. Nonetheless, the game still poses its challenges with hard to reach collectibles and complex level designs. The cute cardboard protagonist is a bit of a slow runner but possesses the ability to double jump in order to reach platforms.

Certain levels feature powered-up versions of the character, such as a laser-equipped spacesuit or a torpedo-launching submarine for underwater levels. There are also levels where you can ride a sled in snow or a minecart on rails. Some environments can be interacted with. Stepping on certain areas causes a small flower to grow and some obstacles can only be cleared after defeating an enemy. Each level has 3 golden paperclips and 1 golden button to be collected that are used to unlock secrets later in the game. 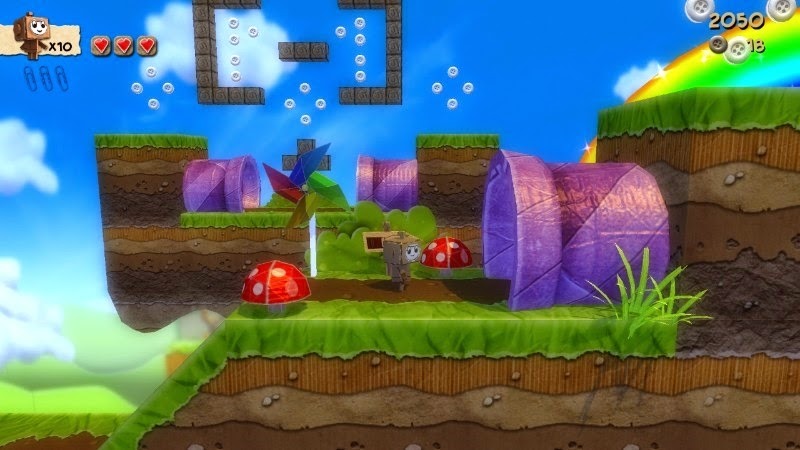 Many levels utilize both foreground and background, using pipes to get between areas (a similar mechanic was seen in Donkey Kong Country: Returns). Levels are selected from a hub world where players can keep track of their high score and items collected. Each world has about 6 levels that fall within the world’s theme. The end of each world features a boss battle that can be beaten once the player figures out its attack pattern.

Controls work well once you get used to the physics of the game. Despite the simple controls, the gamepad is the only compatible controller but the game does supports Off-TV play.

The game’s visuals are the work of very creative artists and add tremendous charm to the adventure. All of the characters and environments in the game look like they were made out of paper mache and cardboard, with defeated enemies turning into a puff of confetti. The expressions on the main character can be easily seen, from taking damage to the celebratory close-up at the end of a level.

The 3D models really make the characters pop and the scale of everything is balanced. I would say, however, that these visuals make me wish that the game was for the 3DS as I’m sure the stereoscopic 3D would work very well with the game’s visuals and play style. Levels that alternate between foreground and background gameplay are done seamlessly and actions in the background can be seen clearly despite being on a smaller scale. 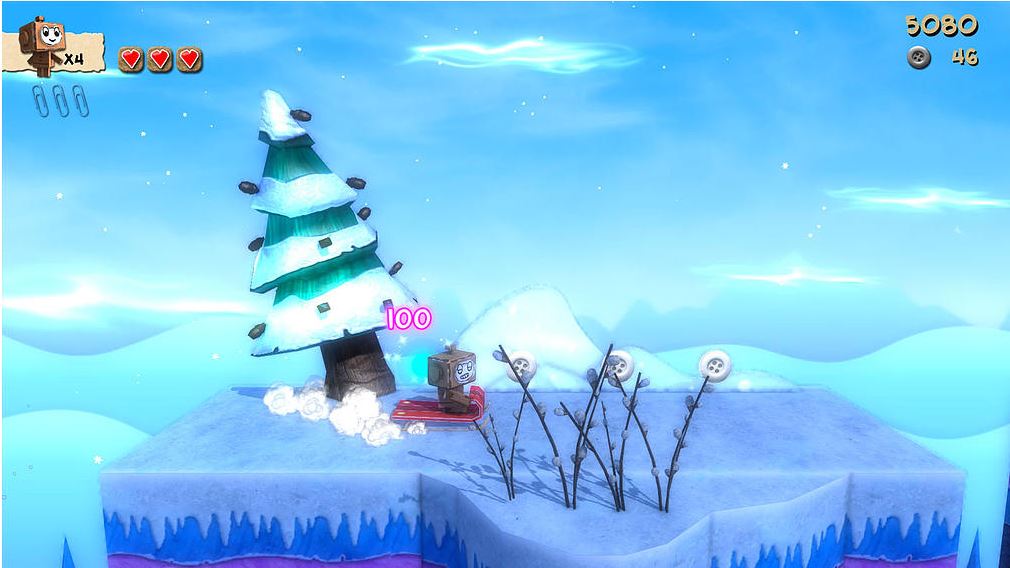 The songs from the game’s soundtrack fit well with the theme of their respectful world. Styles range from light and lively to exciting and upbeat and are well made. Sound effects are decent and clear. 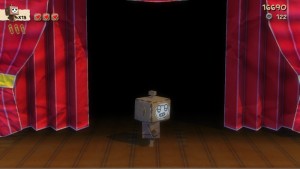 Paper Monsters Recut is a more than successful port and upgrade of the original Paper Monsters. The amount of effort put into this game  is more than apparent in both the game design and the visual appeal. Taking influences from classic platformers and putting a unique spin on them makes for a fun game.

While there isn’t anything incredibly remarkable about the gameplay, the style and atmosphere of the game is great. There is almost nothing that hurts its quality. The game is great for those who enjoy relaxed platformers and the appeal of the game’s unique art scheme. I would love for this game to port to the 3DS where I think it would feel even more welcome.