4 min read
Add comment
FacebookTwitterRedditPinterestEmail
The Letter preys upon the human response to suspense, darkness, and the unknown. Spoiler alert – there’s nothing there. Like literally, nothing there. Nothing. Nothing at all. Trust me, I looked. Nothing.

The Letter preys upon the human response to suspense, darkness, and the unknown. Spoiler alert – there’s nothing there. Like literally, nothing there. Nothing. Nothing at all. Trust me, I looked. Nothing.

Taking generous inspiration from the  psychological horror genre of games (think Slender),  and mixing in a story, The Letter takes a great idea… and doesn’t do very much at all. Story-wise, you take control of Michael Kennedy – the son of Taylor James Kennedy – who finds a letter from his father who is on the verge of death. He informs him of shady happenings at the construction site where Michael works. Despite his father’s plea that he stay away from his job site, Michael proceeds anyway finding more clues suggesting his father was murdered.

The game is played from first-person view and takes place almost entirely in the dark with the only light coming from Michael’s flashlight. In some levels it is the only way to see anything. To proceed from one level to the next, the player must find a series of items listed at the beginning of the level.

The game really doesn’t offer much of a challenge. There are no enemies nor a timer, just vaguely identified objects strewn about other objects. There are only about 5 levels in the whole game and not much else. Various sources have claimed first play-through 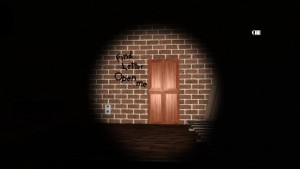 s took about 20 minutes but replays could be done in less than 10 just from memory. For what it’s worth, playing it through the first time can be a bit of a thrill wandering around in the dark expecting something to happen but there’s not much for replay.

The game also lacks an inventory menu, the ability to pause, and does not have off-TV despite advertising so. It also has inverted view controls which can be troublesome to those not used to it. Updates are rolling in here and there but there is a lot of ground to make up for.

Despite the very short game play, the visuals are decent. Although bare, what is in the game looks okay, albeit a bit blocky including  objects strewn about the surrounding environments.  The music is arguably the best the game has to offer and is reminiscent of songs from Goldeneye 007 for the N64. With that note, it makes me wonder if this game could have been recreated on the N64 with the same results as The Letter does not even come close to utilizing what power the Wii U has to offer.

Did I mention that by the time I got around to playing it, it had received an update? I played version 1.1 which apparently was an improvement from the initial release. Now, I’m all for progress and letting something grow in hopes of improvement, but it would take a lot of updating for the game to earn it’s worth. I would not be quick to pay $1.99 for such a shallow title but I won’t stop you if you want to check it out.

I’m trying not to be mean here. There is potential in The Letter, it’s just that this game was released a few years premature considering what it could have been. I wish Treefall Studios the best of luck with their future endeavors, but I hope they come up with more than just a demo next time.