6 min read
Add comment
FacebookTwitterRedditPinterestEmail
A considerable step up from its mobile predecessor. While its design is simple, the game provides plenty of challenge and can be quite fun if you aren't easily frustrated.

From the moment you turn the game on, it can be plainly seen that Ping 1.5 + takes heavy inspiration from classic arcade games, particularly Pong. It is a puzzle game and the object is to get a cube-shaped “ball” (like in Pong) through a maze-like level by bouncing it off of walls and reaching the goal.

Ping 1.5 + is the first game developed and published by the independent developer Nami Tentou Mushi – a three person design team lead by Christopher Arnold and headquartered in Oregon. Ping 1.5 + is a sequel to the android game Ping (see my review here) and is the aftermath of a failed Kickstarter campaign for what would have been Ping 2.

After selecting your language of choice (currently English or Spanish), you are presented with the first of many worlds containing 8 levels and a boss level. Ping 1.5+ is a single player game that primarily utilizes the gamepad’s touchscreen for control. The “ball” is a white cube and can be launched by drawing a line from the cube in the direction you want it to go. The longer the line, the faster the ball moves. The goal is to get the cube to the orange goal within a certain number of bounces. Exceeding this number results in a loss, as animated by the crumbling of your cube. The number of allotted bounces varies between levels and some complex levels even allow you to re-launch the ball mid-flight. Think of it like launching the cue ball along a pool table. 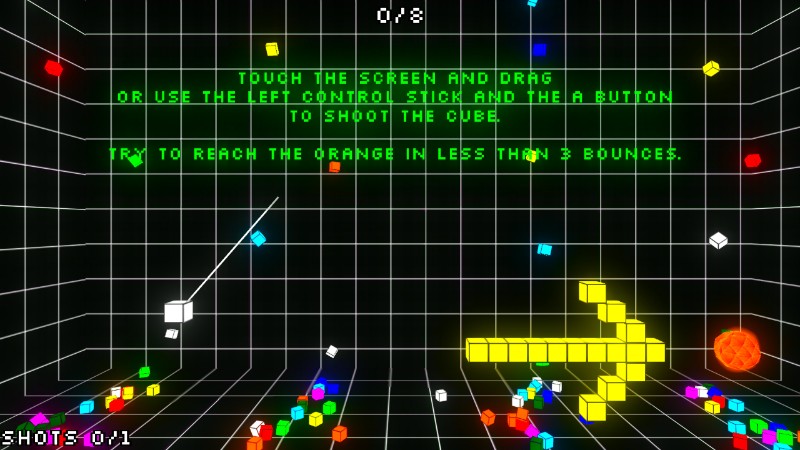 At the beginning, you’re presented with one world that contains 8 levels and a boss fight. Instead of having a goal, a boss fight requires the player to use the cube to destroy a boss or complete a challenge such as destroying a certain number of falling objects. A handful of boss challenges are designed in reference to other games and often have a high number of launches and bounces allowed. After beating all of the levels in a world, the next is unlocked.

The game starts out fairly easy, but quickly becomes quite challenging. Each world introduces a new gimmick from moving obstacles to winding pathways. At times, however, a level that took me hundreds of attempts would be followed by a level as easy as the first level. The game doesn’t have a steady difficulty curve; it instead has an unpredictable variance in difficulty between levels.

When playing, you should expect to die… a lot. This game boasts about its high difficulty. Beating the game requires many attempts at trial-and-error to discover the perfect timing and angle you’ll need to reach the goal. I recommend going onto the options and turning on “Auto-Retry” right away to avoid having to hear the “You Lose” theme repeatedly. You’re also going to need a lot of luck. As levels become more complex, strategies become less about the perfect path and more about figuring out what almost works and then brute-forcing your way through the level. Not every level is like this, but the ones that are are not very replay friendly.

Much like the original Ping game, the graphics of Ping 1.5 + look like 8-bit objects displayed in 2.5D. This includes stage elements such as boss enemies, hazards, and mazes that all look Atari-esque. There are many levels made as tributes to retro games. Franchises including Pong, Asteroids, Space Invaders, and Super Mario Bros., along with a handful of  other indie games, are just a few games reference 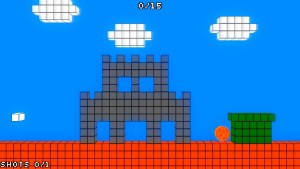 d either by the background, the boss battles, or the design of a level.

While the stages look fine, the backgrounds vary in quality. The majority of the levels have an outer-space background that contrasts well with the brightly colored foreground. Other solid color dark backgrounds also work fine. It’s the few levels with harsh rainbow backgrounds that are a problem. In some levels they make parts of the stage hard to see and in others it’s just a general eyesore.

Ping 1.5 + likely gets its name from the charming “pings” that resonate each time the cube bounces off of walls. The game also features a dynamic soundtrack. Level themes consist of upbeat, yet mellow electronic music that can be almost soothing at times — a necessity for a game this demanding. However, this contrasts (almost too sharply) with the speedy 8-bit fanfares at the completion or failure of a stage. If Auto-retry is on, level music continues to play uninterrupted after a loss instead of starting over again and again which is a big plus. 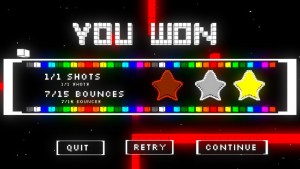 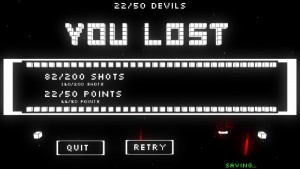 While a fully funded Ping 2 would have been much more polished, Ping 1.5 + is a considerable step up from its mobile predecessor. While its design is simple, the game provides plenty of challenge and can be quite fun if you aren’t easily frustrated (or are a masochist gamer). The game is tedious, but it is easy to pick up and just as easy to put back down after playing for a bit.

The amount of references and tributes to many old-school games is very impressive and the overall retro theme is great for those who want to feel nostalgic. The nod to other current indie games is also respectable. Its consistent 8-bit theme is the game’s best selling point. There are a few design flaws that can be off-putting at times and gameplay does become monotonous after a while. While the idea is quite clever, the game isn’t anything wildly revolutionary. But, it achieves what it sets out to accomplish.  If you like visual puzzle games (or a good mental beat-down), this is worth a shot, especially if you can nab it while it’s on sale. Future updates have been promised so perhaps tweaks here and there can improve the experience.

It’s a decent first game by this team. Bravo.