Walt Simonson and Bendis to team up on Avengers

6 min read
1 comment
FacebookTwitterRedditPinterestEmail
Marvel Comics has announced during a press call that the legendary Walter Simonson will soon be the artist on Avengers written by Brian Michael Bendis. 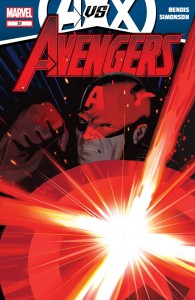 Marvel Comics has announced during a press call that the legendary Walter Simonson (The Mighty Thor) will be the artist on Avengers written by Brian Michael Bendis starting with Issue #25. This will start a six issue tie-in story arc to Avengers vs. X-Men.

Here are some highlights from the press call (Executive Editor Tom Brevoort is also on the call, with Marvel Junior Sales Administrator James Viscardi moderating):

“This is truly one of the things that’s excited me most in my time at Marvel,” Bendis began. Bendis said that, long ago at a convention, he showed Simonson “my childish sketches, and he treated me like a peer.” Simonson would later write Bendis “letters of encouragement,” though Bendis noted that his own path in comics turned toward writing rather than art. Once Bendis himself became one of comics’ big names, he said that he’d offered an open invitation to write a story for Simonson, and he eventually chose Avengers.

Simonson, in turn, said, “I’m in comics myself because of Stan and Jack, and the stuff they were doing in the sixties,” meaning it was “a real treat” for him to eventually work at Marvel on Mighty Thor. “The thing about the ‘Avengers’ that was fun for me, is I got to write it for about a year with John Buscema and Tom Palmer, which was cool for me for the reasons it’s cool for Brian now.” Simonson said he’s now looking forward to drawing the characters together for essentially the first time.

Simonson said that some characters are familiar, some are new, and “I’m really looking forward to going back and drawing Captain America.”

With Bendis’ long run on Avengers ending this year, Viscardi asked about highlights from his run. Simonson joked that, “when you look back, it better be this six issues!” Bendis said there are always reasons to look back, but interacting with fans was a treat.

“What I’m looking forward to drawing most is, there are some guys from AIM with those big protective helmets,” Simonson said, “and it’s right in my wheelhouse.” Simonson added, “when I saw that, I just cracked up. And you wanted him to have a facial expression inside that mask! I’ll do my best.”

Simonson asked all on the call about whether Storm was wearing her “classic” costume, with Brevoort saying it’s a modified version.

Asked why the story was perfect for Simonson, Bendis said he’s using Simonson’s Teen Titans/X-Men as a guidepost and wants to bring that level of action.

Simonson was then asked about new characters since his last tenure at Marvel. He said he’d just got reference material, but “I just want to draw really cool stuff.” Simonson said, because of his own research and reference, whatever he draws “will end up looking like my stuff” and “I’m interested in the challenge of having all these different pieces and trying to put them together in a coherent visual world.”

He added he’s interested in drawing Thor again in “his new threads,” as he has already done for some covers. “Brian’s given me a really nice splash page when Thor shows up,” Simonson said, “and I haven’t drawn it yet, but it is my full intention that it will kick ass.”

Asked how closely Avengers will tie in with AvX and other Avengers titles during the crossover, Bendis said he has “carved out” different storylines for each. “This storyline is specifically about Avengers vs. X-Men, it is from the Avengers’ point of view, and is about where they will be going as a team.” He added that it would also wrap up a lot of character story arcs.

Simonson said the “fan access” of modern comics—including this call—was a somewhat new experience for him. “It’s kind of fun to do. But I don’t know very much [about the event], so I don’t have to be cautious like Brian.”

When the creators were asked what they’d learned from each other, Bendis said, “He’s learned nothing from me, I’ve learned everything from him.” Bendis also joked, “People still want him to be a writer and an artist.”

Asked about characters “duking it out,” Simonson recalled that he was asked in the early ’00s to draw Orion fighting Thor for Wizard Magazine. “I’ve drawn and written Thor, I am now drawing and writing Orion—I’m not going to have the guy I’m writing now lose,” he said. “The young man thanked me politely… and I never heard back from Wizard,” Simonson said, to laughter.

Simonson added that “what’s interesting is context and story,” noting that, in sports, a team can defeat an opponent one week, but lose their next match.

The next question, of course, was, “Who would win in a fight, Thor or Orion?” again to general laughter.

Asked how this arc ties into the Ultron story with Brian Hitch, Bendis said, “Ultron is another topic for another call.”

Talking about sound effects, Bendis joked that Simonson’s were “big and bombastic, whereas mine are like Jewish whining—so you need a different font for that.” He then clarified that, yes, there will be SFX appropriate to the arts, and that he is Jewish.

Bendis said that, though he wrote a full script for the issues, he told Simonson, “do it however you want.” Simonson said that, from his perspective, he wants to effectively “realize the writer’s vision”—which does sometimes involve changing scenes. But as yet, he could not cite examples.

Simonson noted that this is his first monthly comic in about ten years (the last was Orion), and returning to an earlier topic, said he’s looking forward to drawing Iron Man.

The final question was whether Simonson would draw Beta Ray Bill. “Not unless he’s in the script,” Simonson said. Bendis joked, “He is the reason the Avengers are fighting the X-Men.” Bendis suggested Simonson speak about The Mighty Thor: Artist’s Edition, out now from IDW in partnership with Marvel. “They printed 10 copies with trade dress and a piece of drawing paper on the cover. For a not-inconsiderable price, you can name your character and I will draw that character,” he said of the super-limited edition. Pencils and pencil-and-ink versions are on his Facebook page. “Almost all of the requests were for Beta Ray Bill. One was for Hela.”

Closing out the call, Viscardi prompted Bendis to discuss Avengers Assemble, his series with Mark Bagley that is in continuity but focuses on the movie characters. The villain will be Zodiac, but “we came up with a pretty bold reinvention of the idea.”

“A lot of people have been asking me what I’m working on after ‘Avengers,'” Bendis said. “‘Avengers Assembled’ is a bridge book to at least one of those projects.”