A Girl Among Geeks

5 min read
4 comments
FacebookTwitterRedditPinterestEmail
A Girl Among Geeks is here to bring a uniquely female perspective on the stereotypical geek girl.

Ah Geeks!  We’ve come a long way as a people since we were biting the heads off chickens at traveling carnivals, haven’t we? Now we’ve found a nice little niche in modern society as the intelligent, mildly obsessive, humorous people who generally know far too much about far too many random topics.

Or at least that’s how it is for Geek Guys.

Geek Girls, on the other hand, are a group that I’ve tried to distance myself from as much as possible. Rather than a Geek Girl, I consider myself a Girl Among Geeks. Why the distinction, you ask?  It comes from one simple idea – I am not, as many websites and accepted social idioms imply, socially retarded.

While doing research for this article I decided to look at websites that attempted to define a Geek Girl. In the process I came across website after website that set women in early 21st century America into two distinct categories: those that are flighty, moronic damsels in distress who can do little more than giggle while flipping through Cosmo and whimper at the sight of a game controller, and those that are pure social recluses who pound out code and study up on scientific theory by day only to retreat to their lonely Sci-Fi poster covered lairs at night to look out on the world passing by, sigh that they aren’t a part, and report to their nightly Buffy reruns while writing fan fiction. The former are your run-of-the-mill dames you meet around every corner.  The other is the summarized picture of a Geek Girl. 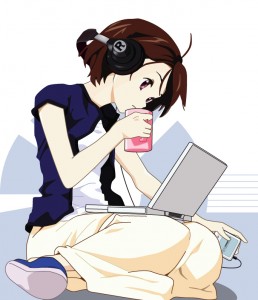 Needless to say, I was less than pleased at this characterization.

Now naturally there are some elements of the Geek Girl stereotype that chicks like me embody. I adore gaming and get a not-so-secret enjoyment when I take a guy down in Mortal Kombat (specifically, it involves smack talk and strutting around the living room a’ la Hulk Hogan entering a ring circa 1984). I’m straight-up obsessive about my pop-culture fixes, be they the latest episode of The Big Bang Theory, watching the audio commentary version of Fight Club, or searching for the latest clips from The Dark Knight Rises set. Most importantly, though, I’m intelligent and unafraid to show it, be it through a simple correction of a friend’s grammar, or by going into a fully uncalled for diatribe about a random scientific fact I heard about the Lyre Bird while watching a David Attenborough wildlife special from years ago on NetFlix. I own my inner geek fully and whole heartedly.

But I also am a normal female member of the lower-middle class. I go to the salon and blow $100 on my hair just for a chance to be pampered and flip through the latest Vogue. I will spend a night with my guiltiest of pleasures (aka bad reality TV) and be unashamed to talk about it the next day around the watercooler with coworkers. Most notably, though, I am a girl who likes to interact on a normal social level with a wide variety of people.

Which brings up another point of contention I had while performing my research: I was stunned at how many times I saw a Geek Girl defined with some, if not all, of the following terms: isolated, work-obsessed, over-weight, awkward, ignored, and temperamental. I read the words “Her best friend is her computer” a depressing number of times. While there were a number of sites I found that portrayed my kind more positively, it was not enough to remove the chip that had been firmly placed on my shoulder. This overwhelmingly negative tone perfectly exhibits the under-lying myth about a geeky girl: we’re a lonely brood who are obsessive about our genderless interests merely because we have nothing better to do with our time.

That is by no means a description of myself, and for that matter any of the geeky chicks I adore. I’m an active dame who, yes, puts a lot of time into work, but also puts in equal effort to play. I work out, cook amazing meals, and hit up local bars and clubs regularly. I go on dates with a wide variety of guys, and when I go to a party I can float between all of the social circles. My shoe collection rivals my film collection, and for the record my best friend is of flesh and blood, not RAM and CPU.

If this means I’m not the world’s definition of a Geek Girl, that’s fine by me. I’m a Girl Among Geeks, and dammit I’m proud.

So here’s my new mission: I’m going to use this format to dig down and define a Girl Among Geeks. And I’m not going to do this by spouting stereotypical and one-dimensional notions. Instead, I’m going to create a model of us over time by chronicling our interests, ranting about our hot button issues, and explaining our perspectives on the Geekiverse. It will be more of a long-term case study, and if I have my druthers it will be a wonderfully entertaining one at that.

And hey, fellas: take this as a chance to learn about some witty, super-awesome ladies that you would not only love to spend a night with playing Arkham City while splitting a six pack, but will actually say yes when you extend that offer.

So, Girls Among Geeks, declare yourself! I know you’re out there, so come and join my revolution!