Are the agents of Warehouse 13 actually Alphas?

2 min read
3 comments
FacebookTwitterRedditPinterestEmail
Alphas have extraordinary abilities and so do the agents of Warehouse 13... coincidence??

SyFy is no stranger to crossing over their shows, as we’ve seen characters from the series Eureka appear on Warehouse 13 before. Last night on another SyFy series, Alphas, we saw a character cross over from Warehouse 13. Granted, Dr. Vanessa Calder (played by former Bionic Woman Lindsay Wagner) has only appeared in 3 episodes of Warehouse 13, but bearing the same character name, being played by the same actor, having the same profession in the CDC, and making reference to her familiarity with “the glaring silence of government work” is surely no coincidence. An interesting thing happens when you carry over characters from one show to another though. You’ve taken two seemingly separate universes and implied to the audience that they are one and the same. This creates new possibilities, as the rules of one universe can spill into the other. An “artifact” from the Warehouse could show up on an episode of Alphas, or Alphas could show up in an episode of Warehouse 13… or have they already??

Consider this: Alphas are people who have extraordinary abilities beyond the scope of “normal” humans. For example, Gary Bell has the ability to view and interact with wireless communication signals. Rachel Pirzad has the ability to heighten each of her five senses. Bill Harken has the ability to activate his endocrinal “fight or flight” response at will, resulting in increased durability and superstrength. 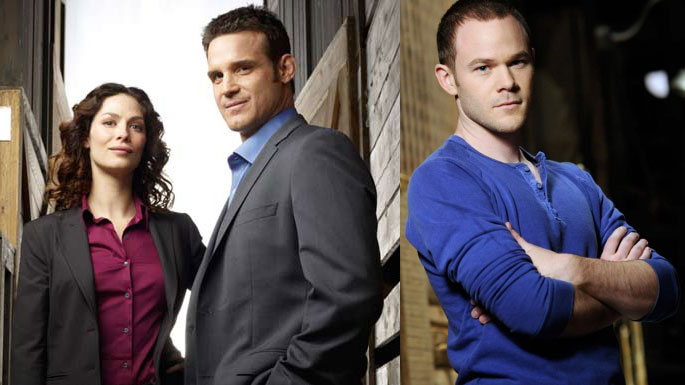 This isn’t unlike the agents we’ve been introduced to on Warehouse 13, each selected for their specific skills. Agent Pete Lattimer has “vibes” that warn him of immediate danger. Agent Myka Bering has a photographic memory and a remarkable eye for detail. Agent Steve Jinks has the ability to detect when someone is lying to him. These all sound like Alpha-type abilities to me.

Since it’s now already set up, it’d be exciting to see a true cross-over episode that places Warehouse agents and Alphas on the same stage. Plus, I want to see Pete hit on Nina, and something tells me she wouldn’t be able to “push” him. Please make it happen SyFy.