3 min read
2 comments
FacebookTwitterRedditPinterestEmail
While not living up to its full potential, Green Lantern is still a fun superhero adventure. 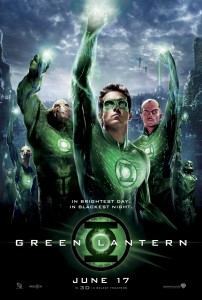 Green Lantern is the story of Hal Jordan (Ryan Reynolds), a brash test pilot who one night encounters a crashed spaceship and a dying alien. The alien gives Hal a green ring, saying it is a great honor and responsibility to be chosen. From there, Hal is whisked away to Oa, the planet that the Guardians have created as a central precinct for the Green Lantern Corps., a group of beings that serve as the protectors of the universe.

Lost yet?? You might be, and this is the first problem with undertaking a universe like the one that exists in the Green Lantern comics. The Green Lantern universe is so expansive and full of details and history that it’s very difficult to cover what’s needed in a 114-minute movie. While the intro summary is informative, it might be too much too soon for the audience to handle. I’m fortunate that I have a good knowledge of the Green Lantern universe, but not all movie-goers will fall into that category. The movie does a decent job of providing the viewer with what they need to know, but this movie should have been more around the 2.5 hour mark, and it seems the expenses needed for that time frame just weren’t an option.

Before I talk about what didn’t work, let’s talk about what did. The special effects in Green Lantern were impressive. The suit itself was the most noticeable effect, but not to a point where I thought it was bothersome. Oa was beautiful, and the creatures that inhabited the planet felt like they belonged. Mark Strong gave the most impressive of the performances as Sinestro, the best warrior of the Lanterns. Blake Lively was much better than the trailers portrayed, and twice as hot. Ryan Reynolds was an acceptable Hal Jordan, but only felt like he truly filled the role in the last 15-20 minutes of the film. Perhaps I’m judging too harshly, as part of the movie’s intent was to show that transformation.

So now on to what didn’t work. The jumpy cuts from scene to scene felt disjointed at times. I’m not sure whether to blame the editing or Martin Campbell as the director. One of the most interesting elements of the movie was the training and learning process Hal had to go through on the planet Oa, but those parts were rushed through much too quickly. In the comics, Sinestro serves as Hal’s mentor and they develop a close bond, but this doesn’t occur in the movie and feels like a wasted opportunity. Finally, the movie’s story structure felt too dated. It was the same old DC formula from the Christopher Reeve Superman days, and doesn’t quite hold up against the modern superhero origin stories.

All those elements aside, I can’t argue that Green Lantern wasn’t a fun movie. It may not be the most well-crafted superhero flick out there, but it was a good time. Perhaps that’s just my love for the character speaking.

Bottom Line: While not living up to its full potential, Green Lantern is still a fun superhero adventure.