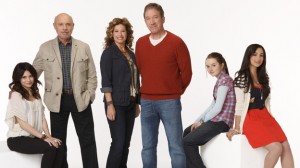 Today it’s a woman’s world, and this man’s man is on a mission to get men back to their rightful place in society. Tim Allen returns to ABC in this new comedy from Jack Burditt (“30 Rock”). Men may have built civilizations, invented the locomotive and created ESPN, but they’re about to find out that it’s not a man’s world anymore. You can’t get manlier than Mike Baxter. He’s the marketing director for an iconic outdoor sporting goods store, he loves to have adventures while he’s traveling for work and, of course, he drives a pick-up truck. While Mike is king of the hill at work, he’s the odd man out in a home that is dominated by women — namely his wife, Vanessa, and their three daughters, 22- year-old Kristin, 17-year-old Mandy and 14-year-old Eve. After being a stay-at-home mom for years, Vanessa recently returned to the workplace and was quickly promoted (much to the dismay of her primarily male co-workers). As a result of Vanessa’s increased work load, Mike is pulled into more hands-on parenting than ever before. The show stars Tim Allen (“Home Improvement”) as Mike, Nancy Travis (“So I Married an Axe Murderer,” “Three Men and a Baby”) as Vanessa, Molly Ephraim as Mandy, Alexandra Krosney as Kristin, Kaitlyn Dever as Eve and Hector Elizondo (“Chicago Hope”) as Ed. “Last Man Standing” was written by Jack Burditt (“30 Rock”), who also serves as executive producer with Tim Allen, Becky Clements, Marty Adelstein (“Prison Break”), Shawn Levy (“Night at the Museum”), Richard Baker (“The Santa Clause,” The Santa Clause 2″) and Rick Messina (“The Santa Clause,” The Santa Clause 2″). John Pasquin (“Home Improvement,” “The Santa Clause”) directed. Last Man Standing is from Twentieth Century Fox Television.