FOX has announced its primetime schedule for the 2011-2012 season which includes The X Factor, four new comedies and three new dramas. Here’s the press release:

“Nothing impacts culture the way a television show does,” said Rice. “And here at FOX, we have the most talked about, most followed, most creative shows that build connections between viewers and brands.”

“Going into next year, we’ve rejuvenated AMERICAN IDOL, built a core strength across the week and developed a really fresh, creative new lineup for next season,” said Reilly. “From razor-sharp comedies to epic dramas to a massive talent competition series, I think we have the goods to continue to be pop culture’s most vibrant platform, as well as the top network.”

Launching this fall is the highly anticipated singing competition series THE X FACTOR, which marks the return of Simon Cowell to FOX. Cowell, along with Antonio “L.A.” Reid, Cheryl Cole and Paula Abdul, will judge the U.S. version of the international television phenomenon that will award an unprecedented $5 million recording contract with Syco/Sony Music to the next global superstar or breakout music group. 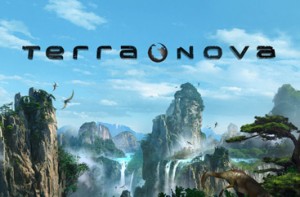 Epic family adventure series TERRA NOVA, executive-produced by Steven Spielberg (“Saving Private Ryan,” “Jurassic Park”), Peter Chernin, René Echevarria (“Castle,” “The 4400”) and Brannon Braga (“24”) and starring Jason O’Mara (“Life On Mars”) and Stephen Lang (“Avatar”), premieres in the fall. The ambitious series follows an ordinary family on an extraordinary journey back in time to prehistoric Earth as a small part of a daring experiment to save the human race.

Also debuting this fall are the half-hour comedies NEW GIRL (working title) and I HATE MY TEENAGE DAUGHTER (working title). Created by Liz Meriwether (“No Strings Attached”), NEW GIRL (wt) is a new single-camera ensemble comedy starring Zooey Deschanel (“(500) Days of Summer”) as Jess, an offbeat girl who – after a bad breakup – moves in with three single guys and essentially sets a bomb off in their lives. New multi-camera family comedy I HATE MY TEENAGE DAUGHTER (wt) stars Emmy Award winner Jaime Pressly (“My Name Is Earl”) and Tony Award winner Katie Finneran (“Wonderfalls”) as single moms, life-long friends – and former nerds – who fear their privileged and overly indulged daughters are turning out to be just like the girls who picked on them in high school.

ALLEN GREGORY is the new animated comedy joining the Sunday ANIMATION DOMINATION lineup this fall. Created by and featuring the voice of Jonah Hill (“Get Him to the Greek,” “Superbad”), ALLEN GREGORY is the story of an extremely pretentious 7-year-old about to embark on his greatest challenge yet: leaving the safety of homeschooling and attending elementary school with children his own age.

Television’s No. 1 hit series, AMERICAN IDOL, will kick off midseason with a special premiere event Sunday, Jan. 22 (10:00-11:00 PM ET/7:00-8:00 PM PT), immediately following the NFC CHAMPIONSHIP GAME. Entering its remarkable 11th season, the series will continue to empower contestants and viewers to share their voices in deciding who will be the next AMERICAN IDOL. 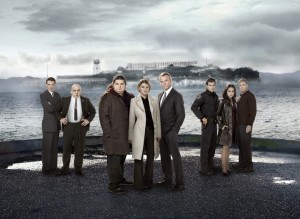 The two new dramas set to launch in midseason are ALCATRAZ and THE FINDER. From executive producer J.J. Abrams (“Lost,” “Star Trek”) and writer Elizabeth Sarnoff (“Lost”) and starring Sarah Jones (“Sons of Anarchy”), Jorge Garcia (“Lost”) and Sam Neill (“Jurassic Park”), ALCATRAZ is the chilling new thriller centered on America’s most infamous prison and the mysterious return of its most notorious criminals. Created by Hart Hanson, the executive producer and creator of BONES, THE FINDER is a new procedural drama starring Geoff Stults (“She’s Out of My League”) as an Iraq war vet with an extraordinary ability to help people find the unfindable. 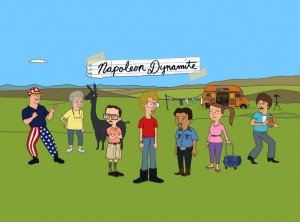 Based on the hit cult classic and featuring the voices of the film’s original cast, NAPOLEON DYNAMITE is the new animated comedy premiering in midseason. The series follows the continuing adventures of Napoleon Dynamite, America’s most awesomely awkward teenager, and his quirky family and friends as they navigate life in rural Idaho.

In March, while GLEE takes a break before its spring semester return, FOX will continue the laughs on Tuesdays with a block of four half-hour comedies. The night will feature the critically acclaimed RAISING HOPE, new comedies I HATE MY TEENAGE DAUGHTER (wt) and NEW GIRL (wt), as well as one of the additional comedies in development, including FAMILY ALBUM (working title) and LITTLE IN COMMON (working title). Starring Mike O’Malley (GLEE) and Rachael Harris (“The Hangover”), FAMILY ALBUM (wt) is the single-camera comedy that takes a snapshot of the Bronsky clan as they reveal the hilarious stories behind the photo-worthy moments of life. The new family comedy LITTLE IN COMMON (wt), starring Rob Corddry (“Hot Tub Time Machine”) and Kevin Hart (“Death at a Funeral”), follows three diverse middle-class families who become intertwined when their children play on youth sports teams together.

In addition, Kiefer Sutherland, star of the landmark Emmy Award-winning series “24,” returns to FOX in TOUCH, scheduled to go into pilot production this June. Written and created by Tim Kring (“Heroes”), TOUCH centers on the relationship between a single father and his 11-year-old son with special needs. Their relationship and their lives take an extraordinary turn when the gifted son begins to make connections in his life and around the world.

This spring, FOX will celebrate its 25th birthday with a star-studded look back at the last quarter-century on the FOX 25th ANNIVERSARY SPECIAL (working title) airing Sunday, April 1. FOX’s biggest stars from both past and present will make appearances to honor the network that began 25 years ago.

Following are the FOX 2011-2012 primetime schedule and synopses of the new series: