3 min read
Add comment
FacebookTwitterRedditPinterestEmail
New York Comic Con is your chance to get your hands on one of Titan’s most anticipated releases ever, ICONS: THE DC COMICS AND WILDSTORM ART OF JIM LEE.

My good friends over at Titan Books sent me over some info to share with all you geeks. They’ve got a whole lot going on at this year’s New York Comic Con including a signing with Jim Lee and a special edition of ICONS: THE DC COMICS AND WILDSTORM ART OF JIM LEE. You better believe I’m gonna get my hands on a copy!! 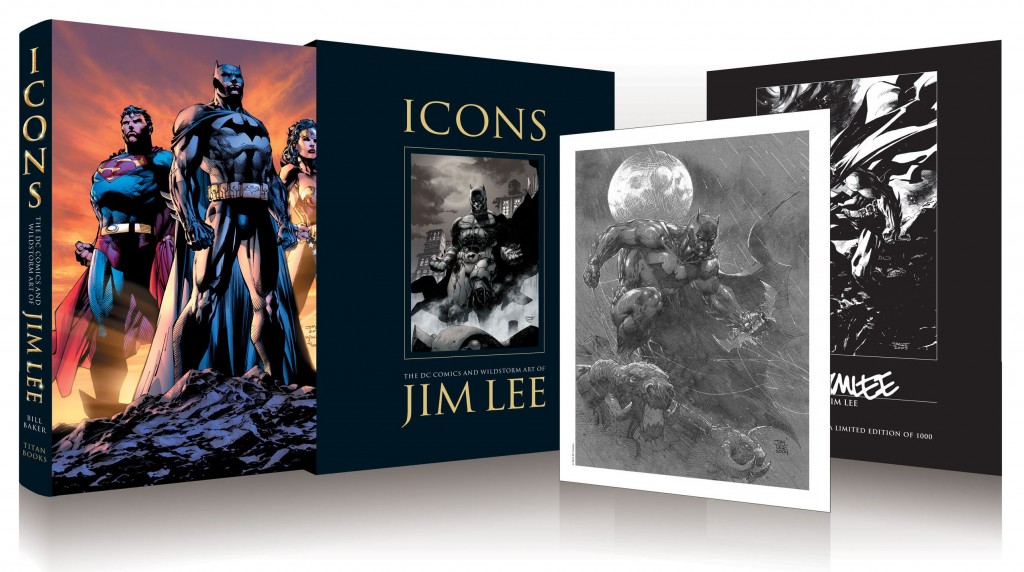 Here are some excerpts from the press release regarding Jim Lee:

New York Comic Con is your chance to get your hands on one of Titan’s most anticipated releases ever: ICONS: THE DC COMICS AND WILDSTORM ART OF JIM LEE! Con-goers will be able to bag themselves copies of the New York Comic Con Exclusive Limited Edition of the book – numbered and extremely limited slipcased volumes signed by Jim Lee, each of which comes complete with a breathtaking BATMAN art print (only available in this edition) and variant dustjacket. Plus the great JIM LEE himself will be on hand for a signing and a panel!

On Saturday October 9, at 2:45-3:45pm in Room 1A08, Titan Books presents JIM LEE AND ICONS: THE DC COMICS AND WILDSTORM ART OF JIM LEE. One of the most popular and successful artists in modern comics and now co-publisher of DC Comics, Jim Lee appears exclusively for Titan Books to discuss his amazing new book and his impact on the DC Comics universe. From roughs and storyboards to pencils and finished color art, ICONS showcases every stage of Jim Lee’s creative process, and this is a unique chance to hear him discuss his work first hand.

JIM LEE will be signing copies of the exclusive limited edition of ICONS on Saturday in Autograph Alley at 1 pm on Table 2 – so stop by Titan’s Booth 2322 to get your copy of the book.

Here are some other Titan Books-related events that will be taking place:

Saturday October 9 is set to be a big day, as Titan also presents MORT WALKER AND BEETLE BAILEY, 1-2pm in Room 1A15. Join comic strip legend Mort Walker as he talks with Tom Spurgeon of The Comics Reporter, about the 60th anniversary of his wonderful creation and his new collection Beetle Bailey: 1965 Daily & Sunday Strips, published by Titan Books.

Following the panel, at 2.30pm, Mort Walker will be appearing at Titan’s Booth 2322 to sign copies of the new Beetle Bailey: 1965 Daily & Sunday Strips collection.

We’ve also got some great goodies available for early birds to Booth 2322! The first 100 people to pick up a copy of the gorgeous THE ART OF DREW STRUZAN will receive a free full-color art print, signed by Drew Struzan himself, featuring a BACK TO THE FUTURE III comprehensive sketch that’s so rare it doesn’t even appear in the book! The awesome hardback collects never-before-seen comps and sketches, alternative concepts and work-in-progress art alongside his inimitable finished poster paintings.

Meanwhile, the first 50 people to get themselves a copy of THE SIMON & KIRBY SUPERHEROES will receive a free, exclusive color print signed by JOE SIMON himself! This 480-page hardback compendium features all of Simon & Kirby’s finest superhero stories and characters outside of their work for Marvel and DC, including Fighting American, The Fly, Lancelot Strong and The Stuntman, fully restored to their original glory.

And finally, NYCC attendees will have the opportunity to pick up Titan’s first volume of Hågar the Horrible daily strips, complete with an exclusive illustrated bookplate signed by Chris Browne, the current artist on the strip and son of Hagar creator Dik Browne.