6 min read
2 comments
FacebookTwitterRedditPinterestEmail
PAX is what happened when Penny Arcade asked some of the biggest names in gamer geek subculture to hang out with 30,000 of Penny Arcade’s closest friends.

Writing a review of PAX East is a nearly impossible task. If you know about PAX, you know just how unspeakably amazing the whole shindig is. If you don’t, then I don’t think we can be friends anymore.

For starters, there’s really nothing to compare it to. PAX ‘Prime,’ the original Penny Arcade Expo, is held on the West Coast, along with pretty much any other big convention I’ve ever wanted to go to, like E3 or BlizzCon. This year, the creators of PAX decided to go out on a limb and try to extend their special kind of magic to all of us poor sods on the east coast who don’t get any awesome conventions in our backyards like the lucky SOB’s in Washington and California. PAX combines all aspects of geek & gamer culture, from tabletop games such as Dungeons & Dragons, Magic the Gathering, and Warhammer; to video games on both console systems and computers; to cult classic movies and even comics. Let’s not forget, Penny Arcade is, at its heart, a webcomic.

It is a webcomic that has grown to such extremes that it now has created a million-dollar charity (Child’s Play) as well as two gaming conventions and six published books on top of its multi-million-page-views-a-day readership. PAX was created by the Penny Arcade team – led by Mike Krahulik and Jerry Holkins – as just the sort of convention they would want to go to, but couldn’t because it didn’t exist. In essence, they asked some of the biggest names in gaming (Microsoft, Nintendo and EA amongst a dozen others), computer technology (AMD, NVIDIA, Alienware, and my personal favorite Newegg all made the list), and gamer geek subculture (Jonathan Coulton and Wil Wheaton amongst many others) to bring their stuff and come hang out with 30,000 of Penny Arcade’s closest friends.  There are concerts, tournaments, hundreds of televisions and computers set up as ‘freeplay’, panels about any number of topics, and a vast amount of room to just stretch out and chill with your thousands of new buds.

So while admitting that a comprehensive review is fairly unreasonable an undertaking, I’ll limit myself to just the convention as an experience. 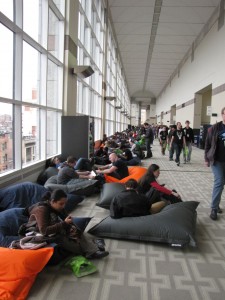 Every last person – with the exception of the stinky dude in line in front of me Friday morning outside of the Convention Center – that I sat down next to or waited in line in front of or behind was a genuinely decent human being. I can’t think of another time in my life where I could say I met hundreds of random people, and every last one of them was pretty damn cool. The pervading theory of interpersonal relations was to just not be a dick (“Rule Seven!” was shouted by dozens of bystanders if anyone actually did something dickish).

The hundreds of SUMO bean bag chairs (which are ridiculously comfortable, by the way) thrown around the Handheld Lounges on the second and third floors were melting pots of conventioneers. Sprawling across a bean bag next to somebody cannot help but foster feelings of friendship.

The pace of things was a comfortable stroll – people had places to go and things to see, but nobody was really in that big of a hurry. Cosplay was apparent but not abundant – most costumes were meant to be tributes or inside jokes, and not blatant cries for attention. The attendees were predominantly men, of course, but women were prevalent enough to be invisible. A single female walking down the hall was not anything out of the ordinary, which is so odd to me as a female gamer as to be blissful. I remember feeling like a farm animal at a Games Day in Baltimore… which is a really great metaphor and I’ll expound upon it someday, but for now just go with it. Not once at PAX – even on Friday when I was sans-husband – did I get cornered, stalked, objectified, insulted, or otherwise treated as anything other than just another attendee. The flirting was good natured fun, everyone was unfailingly polite, and not once was I witness to any kind of drama.

Were there some bad aspects to PAX? Of course. This was the first year on the east coast, first year at the Hynes, first year anywhere outside of their immediate area; putting on a show of this magnitude is going to have some hang-ups when you’re having it next door, so trying to organize it 3000 miles away is a monumental PITA. The venue was plainly too small for the function, especially the Expo Hall. The main theatre had a capacity of less than half the number of paid attendees. Every panel and presentation I witnessed was in a room at max or nearly-max capacity; the Enforcers spent more time counting heads and keeping to fire code than anything else.

Now that the PA team knows how popular this event will be – the badges sold out completely more than a month before the show, so there were no admissions sold at the door – a larger site can be booked.  One year under their belt means next year will have fewer logistical difficulties (such as the concert ending 90 minutes after the trains stopped running, potentially stranding attendees at 2 in the morning in downtown Boston) and within a few years I’m sure PAX East will run as smoothly as PAX Prime.

In the end, as I rode the green line back to Park Street to catch the red line to Braintree and, ultimately, my car, I was left with a small bundle of disappointment. I wasn’t disappointed in the convention itself – PAX East was everything I’d made it up to be in my years of longing to go to PAX Prime in Seattle – I was crushed that not one of my multitudes of gamer friends had allowed themselves to be talked into going to PAX with me. None of them could share my laugh at the antics of Jerry’s stick-figure Tycho molesting the other characters in the Make-A-Strip Panel on Saturday. Nobody will envy my PAX East 2010 limited-edition scarf and t-shirt that I managed to snag before they sold out. None of them can commiserate with the loss of the second-place team in the Omegathon who, honestly, got totally hosed. And probably none of them will believe me if I tell them about the girl dressed like the witch (from Left for Dead) in the corner of the tabletop room who got bopped on the head by an inflated NVIDIA thunderstick and chased a terrified man, screaming, down the hall, while security watched, slightly concerned.

No, none of my friends shared in this experience with my husband and I…

…which means we must harass them endlessly until PAX East 2011, haul them to whatever site PAX is moved to, and introduce them to our 30,000 new friends.