6 min read
Add comment
FacebookTwitterRedditPinterestEmail
His increasingly bizarre choice of roles and subsequent performances are clearly the work of someone who's become increasingly unhinged.

So Nicolas Cage has to be crazy, right? I mean, there’s plenty of evidence in his off-screen behavior to indicate this, but his increasingly bizarre choice of roles and subsequent performances are clearly the work of someone who’s become increasingly unhinged. Think of Brando in Apocalypse Now, only ALL THE TIME.

The shame of it is that once upon a time, Cage seemed to be destined for on-screen greatness. I know I wrote the same about Bill Pullman in my last entry, but where Pullman is a pretty face with limited ability who might have become a bigger star if he’d stumbled into a couple of bigger roles, Cage is a funny-looking dude of immense talent who keeps getting chances to put his career back on track and keeps making the wrong decisions. 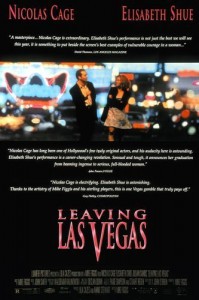 If I were to draw a line through Cage’s IMDb page to determine where such a promising actor derailed his entire career, I would put it between entries 36 and 37, the years 1995 and 1996, Leaving Las Vegas and The Rock. Nicolas Cage won an Academy Award for Leaving Las Vegas; he hasn’t been nominated since. The Rock was his first collaboration with Michael Bay and set the tone for the rest of his career to date.

Nicolas Cage seems to have done all of his dues-paying as “Brad’s Bud” in Fast Times at Ridgemont High, because it didn’t take long for him to start landing bigger parts, such as the lead in cult favorite Valley Girl, or roles in uncle Francis Ford Coppola movies like Rumble Fish, Cotton Club, and Peggy Sue Got Married.

His role as Kathleen Turner’s teenage boyfriend/adult husband in Peggy Sue Got Married proved that Cage was an actor capable of great range and nuance, and his career took off from there. The next year he starred opposite Cher as her one-handed lover in Moonstruck and joined Holly Hunter in the Coen brothers’ screwball classic, Raising Arizona. In Moonstruck, Cage wandered into the over-the-top territory he’s criticized for now, but for the most part he plays the role with restraint. He is nothing less than perfect as H.I. McDunnough in Raising Arizona, perfectly capturing the character’s loopy charm and homespun philosophizing.

Over the next couple of years, Cage took an eclectic mix of roles. He famously ate a live spider in Vampire’s Kiss, starred in Firebirds (Top Gun with helicopters), gave a delicious, Elvis-inspired performance in David Lynch’s Wild at Heart, and played the straight man to Shirley MacLaine’s fussy former first lady in Guarding Tess. His performances in Honeymoon in Vegas and It Could Happen to You showed he could effortlessly navigate rom-coms, and he played a classic noir hero in the mostly-overlooked Red Rock West.

1995 found Cage enjoying the greatest critical success of his career when he won the Oscar for Leaving Las Vegas. The only thing that could stop him was a succession of poorly-chosen roles in adequate-to-sub-par movies.

Which is of course what happened.

I know The Rock has it’s defenders, and Cage’s character is the milquetoast counterpart to Sean Connery’s badass, so Cage wasn’t doing anything terribly different with his on-screen persona yet. “Then,” to quote H.I. McDunnough, “the roof caved in.” 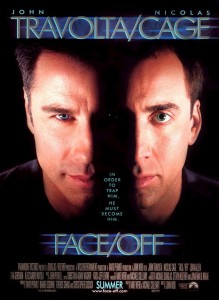 The next five movies Nicolas Cage made are inexcusable. I mean, Con Air, Face/Off, City of Angels, Snake Eyes, and 8mm – that’s a murder’s row, baby. The first two were directed by Simon West and John Woo – a pair of directors more concerned with ‘splosions than nuance – which left Cage free to emote however he saw fit. City of Angels was a maudlin melodrama with Cage as an emo angel – I’ll let that sentence speak for itself. The last two were noirs directed by Brian DePalma and Joel Schumacher, respectively. If you’re in a film directed by late-period DePalma or any-period Schumacher, you’re probably in trouble, and both films were uniformly awful, with Cage’s performance doing nothing to help matters.

Between that succession of train wrecks and today, Cage has still managed to turn in inspired performances in Martin Scorcese’s Bringing Out the Dead and Spike Jonze’s Adaptation, in which he played a daring dual role. The fact that it took directors of this caliber to wring such great performances out of Cage suggests that lesser directors don’t keep him on a tight enough leash.

Over the next few years, Cage careened through roles less like an actor eager to show his range than one willing to take any script he was offered. He was a car thief in Gone in Sixty Seconds, a World War Two soldier in Captain Corelli’s Mandolin and Windtalkers, and an Ebenezer Scrooge surrogate in The Family Man.

The thoroughly mediocre National Treasure franchise at least grounded him in a garage sale Indiana Jones persona, but the weight of flops like Matchstick Men and The Weather Man apparently took their toll. In 2006, ten years after he had begun squandering his residual Oscar cred, Cage really jumped into the deep end.  His woman-punching, burn-inquiring, bee-fearing turn in The Wicker Man was the beginning of a whole new kind of crazy. If his turn in Wild at Heart recalled a young, spirited Elvis, his performance as Johnny Blaze in Ghost Rider owes a debt to an older, kookier version of the King. Over the next few years he carried clunkers like NEXT (as a psychic who can see two minutes in the future because that TOTALLY MAKES SENSE), Bangkok Dangerous, and Knowing. 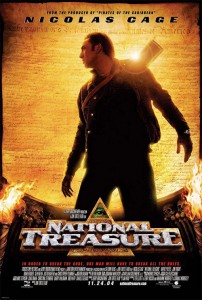 At this stage in his career, the release of a new Nicolas Cage movie carries the promise of some so-bad-it’s-good fun. He seems to have totally embraced his inner freak in The Bad Lieutenant: Port of Call – New Orleans, but Cage never seems to be in on the joke his career has become.

In the preview for The Sorcerer’s Apprentice, the titular apprentice (some kid) asks the titular sorcerer (Cage) if he’s insane. Cage grins and holds his thumb and forefinger about an inch apart in the classic “little bit” gesture. The movie looks like it could be something of a guilty pleasure – the kind of movie you get on DVD and watch with friends so you can make fun of it while it plays – which unfortunately is the best we can hope for with Cage these days.