Where the Wild Things Are – review

9 min read
3 comments
FacebookTwitterRedditPinterestEmail
Honestly, the ability of this movie to connect with its audience is amazing.

If you haven’t seen the movie, this review pretty much summarizes the entire film through every major plot point. 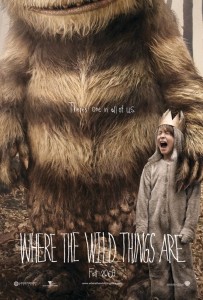 Just yesterday my father-in-law came over to my house with a gift for my wife: Where the Wild Things Are. But, this wasn’t the book, it was the movie. Now, when I first heard this movie was coming out, I was in South Carolina in the summer, and although I was on a golf trip,  I went to the nearest Borders and flash read the childhood classic. I once again enjoyed the amazing visuals, and the story was a little more odd than I remember, but it was still fun. Anyway, like I was saying, my wife and I received the movie yesterday, and since we are having a little boy in July, I thought it only right to screen what I thought would quickly become his favorite movie. And I was amazed at how 90 minutes of film would quickly relocate this flick from my “children’s collection” (which features the likes of Toy Story 1-2, Bee Movie, and Brave Little Toaster) to the 10+ rack.

The movie commences with “Wolf” Max violently chasing his black poodle with a fork. He eventually catches it and manhandles the poor thing. Lucky for me, I knew it was all fake, but after watching the practically torturous event, I said to myself, “Yikes, this isn’t as kid-oriented as I expected.” It was funny too because after the first scene all my father-in-law said was, “This kid is an animal.” I thought it interesting he said such a thing because Max was in a wolf costume, and I equated his dress with his behavior. Although a little violent and crazy for my PG perception, the movie progressed to show the horrible home-life of the main character.

The attention-emaciated child is seen trying to get the attention of his sister and mother all throughout the beginning, but to no avail. At one point he even succumbed to his child-like, annoying little brother instincts and attacked his sister’s friends with snowballs, just to get attention. His plan backfires when he goes to hide in the snow fort he made and one of his sister’s friends jumps on it leaving it utterly decimated and collapsed right on top of Max. At this point, I was unnerved as I relived one of my personal childhood fears–being stuck under a snow fort that collapsed on me. Luckily, Max gets out of the fort, stands up, and cries (I would do the same thing). At this point in the film, although Max receives the attention he wanted for a moment, it goes too far and his sister, Claire, doesn’t even stick up for him. Instead, she gives him a sad look and leaves him there, ALONE and in tears. The next scene then shows him in his sister’s room with his snowy, muddy boots jumping all over her bed. And then, out of anger, he destroys a little heart that he made her.

After a few more scenes of Max not getting attention, he decides to go overboard one night while his mom ignores him for some ugly dude. Max dresses up in his wolf costume again and goes downstairs to stand on the table and demand food from his mother. After a verbal reprimand, he eventually bites her. This leads to him flipping out and running away. And once again, throughout all of this time, I consistently heard, “This kid is an animal; he’s outta control!” And all I could do was agree. The character was as wild as the “Things” that we had not yet seen.

Now in the book, Max is bad, gets sent to his room without dinner, has a forest grow in his room, crosses the ocean and has fun on an island with the “Wild Things”, gets homesick, and wakes up in his room with a warm meal waiting for him. In the movie, when he runs away, this is where he gets into a forest, finds his boat and sails to the island of the “Wild Things”. Max arrives at the island after a lonely sea adventure and finds the main “Wild Thing” named Carol destroying houses of the other creatures in his group. Carol asks for help, but everyone else  is rather flabbergasted with his overreaction to some unknown event and they ignore him. At this moment Max builds with courage, jumps out and crushes a small hole in a house; it impresses Carrol, but not the others. They all then circle Max and this is when the movie really began to get creepy. They surround him and begin asking about what he is and then say they will eat him. As I was watching this, I said to myself, anyone under the age of 8 would be petrified just by watching this scene. Picture it, a little boy, surrounded by monsters threatening to eat him in the middle of nowhere;  I can’t say I fully knew what Max was thinking at that moment, but I know that if I were there I would be scared and want my mom; and, oh yeah, I am twenty-three.

Ha! Anyway, Max goes on to lie in order to gain some stature and the rest of the movie is about how he relates to all of the creatures. Each creature has its own personality trait; one is depressing, one is on the wild side (Carol), one is quiet, and yet all were very very moody. It made me a little upset that the creatures were so touchy, but I continued to watch. After gaining stature in the community, Max–acting as the perfect politician–breaks his promises as king and then tension builds between the “Wild Things”. (I don’t remember that happening in the book.) But before tension builds, Max brings a happy new atmosphere into the state of Wild Country by demanding they all play and howl at the moon and sleep in piles. Everyone seems happy, but then a little drama is brought in when Carol doesn’t like two owls that JW (Carol’s ex-girlfriend maybe? (It never gets explained too well)) is friends with. Carol finds out that Max is just a little boy when he is told by another wild thing. Carol then rips off the arm of this other wild thing and white “something” is shown oozing from the other “thing’s” body. I couldn’t believe that the film showed such violence and almost gore, and once again, at this point, the movie questioned my PG perception. After this violent outburst, Carol gets so upset he threatens to eat Max and Max hides in JW’s stomach–an odd hiding spot if you ask me. Once out of JW’s stomach, he decides to leave the island, because he knows he is a bad king, and is in fact homesick. But, before he leaves he tells the “Wild Things” that they really need a mom.

Although there was a “breakup” of sorts with Carol–Max’s favorite “Wild Thing”–Carol recognizes his fault when he finds a scant memento left by Max. He then runs to see Max leave the island and almost misses the bon voyage, but he makes it just in time, allowing me to consider this moment a mostly happy ending. The only problem I had was, Carol didn’t get to hug Max, or even vocally say goodbye. He only watches him leave, and that made me about 10% sad.

Finally, the movie comes back to the real when Max’s boat lands back in the forest and he ventures home. When he gets home his mom greats him and watches him eat his warm dinner (or maybe it was cake) with a giant smile on her face. Although this scene isn’t Max waking up to a warm meal, it is pretty close. 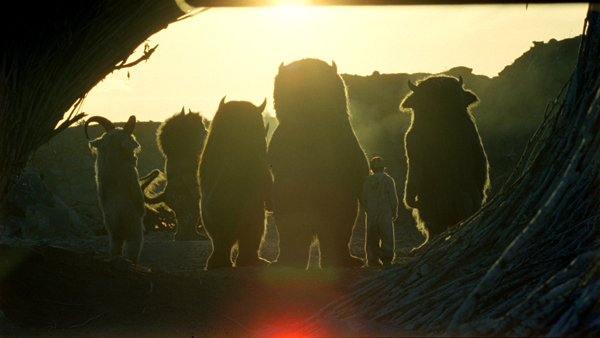 Perhaps you have noticed that up until now I have mentioned a plethora of emotions throughout my review: loneliness, happiness, depression, sadness, anger, courage, homesickness, fear, and forgiveness. One of the paramount qualities of this movie was its ability to evoke emotion from me. I was amazed at how I felt courage, fear, and loneliness along with Max. I was reminded of how my childhood was filled with all of those emotions. I remember overreacting when my sister and parents pissed me off even though I was being irrational, and I remember how I was oh-so-often forgiven by the same family members. Honestly, the ability of this movie to connect with its audience is amazing.

And although I was astonished by this movie’s ability to stimulate emotion, it was also its downfall (as a children’s movie). When Max was scared, there were some alarmingly intimidating scenes; when Max was erratic and disrespectful, it wasn’t a secret to the viewer, and I’m just not sure these scenes are the scenes a parent would want their 4-year old who has read the book to see; perhaps the images were too vivid. Images plant ideas into children’s heads and I think that children would either be having nightmares for a week or they would be standing on their tables shouting, “MAKE ME DINNER, WOMAN!”

As far as the acting is concerned, the actor who played Max–Max Records–was stunning. Every line he delivered, and every visual movement he made had me convinced he was born to play a bratty, challenged child. I also must say that the  “Wild Things” animation was incredible. In fact, it was done so well, I am not even sure if the “Wild Things” were animated at all; they may have been real! Not only were the “Things” well animated, but they looked exactly like the characters in the book. I was also happy to see that Maurice Sendak had a say in what went into the movie, and I know this is why viewers got to experience the emotions of childhood (mentioned above), because it is what the book is about– experiencing childhood.

Besides the dark visuals and blatant disrespect, the only other issue I had with the movie was its depressing mood. Although not entirely depressing, I was still a little gloomy when the credits started to role. This is not the same mood I felt when I finished the book last summer–or when I was a kid. When I was a kid I was often left hungry thinking about a warm meal, and this summer I was left happy recognizing unconditional love and forgiveness. And although the final scene had mom and child reunited, something was missing; I just don’t know what.