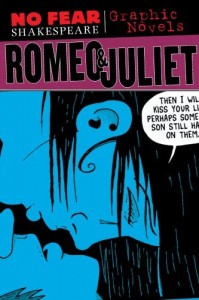 Perhaps the most ubiquitous titles in high school literature have the name William Shakespeare tied to them. You know, Hamlet, MacBeth, Othello, Julius Caesar, and of course the notorious Romeo and Juliet. And, it just so happens that I teach most of these books. Now, because I am the instructor for the ELA level students (if you don’t know what this means feel free to email me), I certainly have my work cut out for me when I have students read phrases like, “Conceit, more rich in matter than in words, brags of his substance, not of ornament.” This Elizabethan English is as extrinsic to them as using a computer is to an ant. Anyway, Shakespearean literature is great for high schoolers because most of Shake’s plays center around violence and deceit, and of course are loaded with lewd jokes–and if there is anything my young whipper-snappers know best, it’s picking out sex jokes–but, it can get laborious when having to explain the general meaning of each line after it is read. Anyway, I only bring this up because after two years of slaving over Romeo and Juliet and never fully enjoying it myself, I have found the answer to my problems and prayers, and the answer to your lack of interest in the great William–that is, I have discovered No Fear Shakespeare’s graphic novels. Yes, that’s right, now you can read Shakespeare in graphic novel form–and I recommend it!

For my first review, I would like to commend Matt Wiegle for doing an amazing job of refurbishing the text and providing vibrant and detailed artwork to complement the translation of Romeo and Juliet. From start to finish, Wiegle allows easy access to the artistic language of Shakespeare without losing out on too much of the iambic pentameter, amazing use of figurative language, and wordplay. 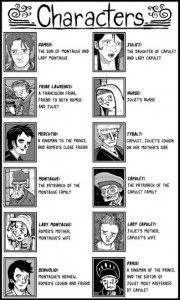 Because of his vivid still lifes, you no longer have to worry about picturing a baby-face Leonardo chasing after an angelic Juliet (Danes) as portrayed in Luhrmann’s tragic representation. Wiegel animates the characters to look like comic characters–making the images very fun to view–and not too distracting so that you can focus on the creativity  of the language.

Wiegle’s understanding of Shakespeare’s intents extend past providing a fun to read translation, but also include explanations of the jokes of the time.  So, the jokes that were once an enigma–Mr. E. Nigma?  I don’t think so–are actually explained in footnotes and much easier to understand, of course, because they are accompanied by pictures. And, for those jokes that fly over the heads of even the best Shakespearean scholars, Wiegle provides references worded like, “You will just have to trust them [Mercutio, Benvolio, and Romeo] that this [joke] is hilarious.”

The only issue I have with the graphic novel is the lack of color involved. I recently purchased the graphic novel version of Fahrenheit 451 (review to come soon) that is in full color; it’s so vibrant I am surprised it’s not in 3-D. And in comparison to that text, the Romeo and Juliet graphic novel  looks like an early 1900s silent film.

But, if that is its only downfall, then I say this text is a winner. The great classic comic look that clearly presents Shakespeare’s elegant skill is a must read for anyone who has always wanted to enjoy Shakespeare, but just couldn’t.