AC/DC to have music featured in Iron Man 2 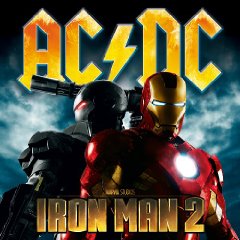 Through a unique collaboration between Marvel Studios and Columbia Records, AC/DC’s music will be featured in Marvel Studios’ Iron Man 2. Also, Columbia Records will release the album “AC/DC: Iron Man” on Monday, April 19, 2010. “AC/DC: Iron Man 2” features 15 classic AC/DC songs selected from ten of the band’s studio albums, ranging from 1976 to 2008. The complete track listing can be found below.

Pre-orders begin today, January 26 at Walmart.com for the “AC/DC:  Iron Man 2” CD and at Amazon.com for a deluxe version of “AC/DC:  Iron Man 2” – CD+DVD and two LP vinyl packages.  The film opens internationally beginning on April 28, 2010.  In the U.S., the film will be distributed by Paramount Pictures and is scheduled for release on May 7, 2010.

The debut video from “AC/DC: Iron Man 2” is the AC/DC’s classic album cut “Shoot To Thrill,” which was filmed live last month in Buenos Aires during the band’s highly acclaimed Black Ice World Tour, the second highest grossing world tour of 2009 according to concert industry trade publication Pollstar.  The video also incorporates exclusive footage from “Iron Man 2” and debuts today worldwide. Check www.acdc.com and www.marvel.com for more information.  “Shoot To Thrill” was originally recorded for the band’s 50-million selling album “Back In Black”, one of the best selling albums of all time.

“Jon Favreau’s vision and passion for AC/DC’s music blend seamlessly into this incredible film” said Steve Barnett, co-chairman of Columbia Records.  “The music really underscores the high energy and excitement of the film.”

“Music is an integral part of the Tony Stark and Iron Man experience, and we are pleased that Columbia and AC/DC are taking part in the franchise’s phenomenon. Through this relationship, the band is delivering fans supercharged Iron Man-branded music through all our combined consumer touch points, from the movie to retail outlets and even virally with the debut of the new video,” said Tim Connors, Chief Operating Officer, Marvel Studios.

Robert Downey Jr. reprises his role as billionaire industrialist Tony Stark, aka the super hero Iron Man in this sequel to the 2008 blockbuster. RDJ, Paltrow, Cheadle and Rockwell are joined by Samuel L. Jackson as Nick Fury and Mickey Rourke as Whiplash. Jon Favreau once again takes up the directorial reins for Marvel’s armored avenger.