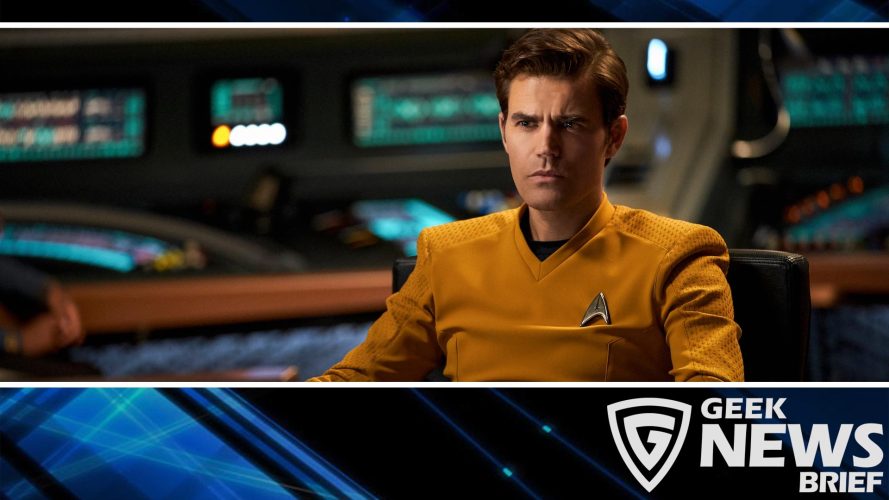 Paul Wesley has been cast in the iconic role of James T. Kirk for the second season of Star Trek: Strange New Worlds. The announcement comes ahead of the season one premiere this May.

Strange New Worlds follows Captain Christopher Pike, Science Officer Spock, and Number One as they explore new worlds around the galaxy. Their adventures predate Captain Kirk’s ever stepping foot aboard the U.S.S. Enterprise.

BBC Studios has announced that Doctor Who’s TARDIS has landed in Fortnite. However, the crossover is not an official collaboration with the game. Instead, the playable space can be accessed in the game’s Creative mode.

When the mysterious Reality Virus causes the TARDIS to appear on the island, players must help repair it by finding the parts to fix the Dynamorphic generators.

The game starts on the TARDIS Landing Site where players will find the TARDIS and start their quest to gather the Dynamorphic Generator Crystals from around the hub island in order to repair it. Special rewards and surprises will keep players on their toes along the way.

Players interested in learning more about the Doctor’s world can head to the Doctor Who Museum. Here, there’s more info about the famous friends and foes of the Doctor, including the Cybermen, Daleks, Weeping Angels, K-9, and the TARDIS.

Netflix has announced that their upcoming live-action Resident Evil series will debut on July 14th.

Set in the year 2036, the series takes place 14 years after a deadly virus caused a global apocalypse. Jade Wesker fights for survival in a world overrun by the blood-thirsty infected and insane creatures. In this absolute carnage, Jade is haunted by her past in Raccoon City, by her father’s chilling connections to the Umbrella Corporation but mostly by what happened to her sister, Billie.

Ms. Marvel, one of several MCU shows coming to Disney+ this year, will premiere on June 8th. The series centers around Kamala Khan, a Pakistani-American from New Jersey who idolizes her world’s superheroes, especially Captain Marvel.

A new trailer arrived along with the release date announcement, which shows more of Kamala’s altered cosmic powerset for the series. This has been a point of debate since it was first revealed, as Ms. Marvel’s polymorphic abilities in the comics are closer to the Fantastic Four’s Reed Richards than the cosmic abilities shown in the trailer.

The source of her powers also appears to be tied to mystical bracelets instead of her comic book power origin of being an Inhuman. However, making her powers cosmic and making this bracelet potentially of alien origin ties the character even closer to Captain Marvel, whose sequel movie will also bring Ms. Marvel to the big screen.

Harley Quinn spin-off series for Kite Man in the works

A spin-off series of HBO Max’s Harley Quinn, titled Noonan’s, is currently in the works.

At SXSW, Warner Bros. executive and Harley Quinn series co-creator Patrick Schumacker teased the new show. Since Schumacker specifically said it was in development, things are still subject to change.

Noonan’s would follow Kite Man as he buys Noonan’s Bar, an infamous hangout spot for hitman and henchman of Gotham.

Schumacker added that, “He tries to run the bar by himself but it doesn’t turn out so easy. We have Harley and Ivy appear in the first episode, but after that we have different goons and villains appearing every episode like Lex Luthor and Bane. It will be kind of like ‘Cheers’ for supervillains.”