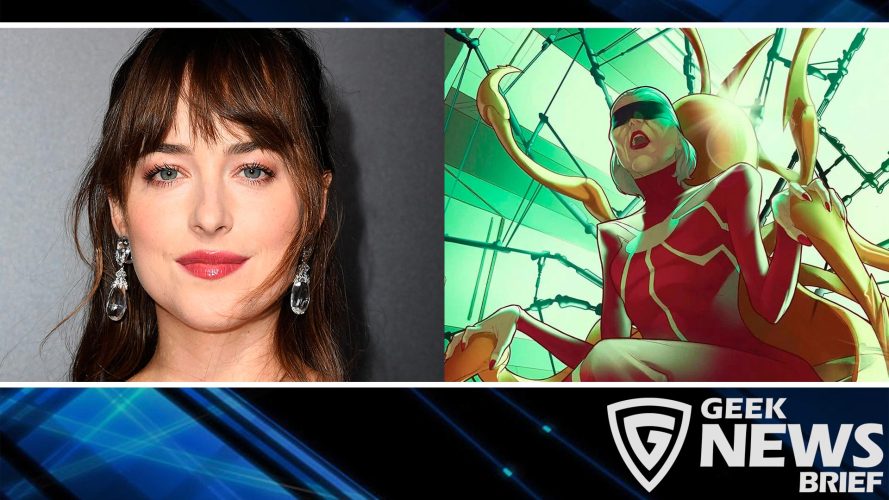 Sources have reported to Deadline that Dakota Johnson is in talks to star in a Madame Web movie for Sony’s expanding Spider-Verse.

In the comics, Madame Web is depicted as an elderly woman with an autoimmune disorder and thus connected to a life support system that looked like a spider web. Due to her age and medical condition, she never actively fought any villains. For that reason, sources have stressed that it’s possible the project could turn into something else. Insiders say that due to her psychic sensory powers, she is essentially Sony’s version of Doctor Strange.

Hulu has announced that the Season 3 premiere of The Orville has been pushed back to June 2. The new season was previously set to kick off on March 10.

Series creator and lead Seth MacFarlane said on Twitter: As occasionally happens, our show has been repositioned amidst the ever-changing television schedule landscape, which means that the wait will be just a bit longer. We’ve always promised you a television experience that will make it worth the wait, and we’re not wavering on that. We understand the frustration you’re feeling over more delays, so we want to give you a little taste of what’s to come.

Along with the statement, MacFarlane revealed a sneak peek of Season 3 footage, including the show’s new main titles.

In the meantime, make sure to check out my podcast Quantum Drive, in which we discuss every episode of The Orville, available on all podcast platforms.

Tales of the Walking Dead reveals its cast

AMC has announced the initial cast for Tales of the Walking Dead, their next spinoff series set in The Walking Dead universe. Anthony Edwards, Parker Posey, Terry Crews, Poppy Liu, and Jillian Bell have all been tapped to star in the episodic anthology series.

Each one-hour standalone episode of Tales of the Walking Dead will focus on both new and established characters set in the world of the original series, which is set to premiere this summer on AMC and AMC+.

Rockstar confirms that Grand Theft Auto 6 is in active development

The update from Rockstar reads: “With the unprecedented longevity of GTAV, we know many of you have been asking us about a new entry in the Grand Theft Auto series. With every new project we embark on, our goal is always to significantly move beyond what we have previously delivered — and we are pleased to confirm that active development for the next entry in the Grand Theft Auto series is well underway. We look forward to sharing more as soon as we are ready, so please stay tuned to the Rockstar Newswire for official details.

On behalf of our entire team, we thank you all for your support and cannot wait to step into the future with you!”

Donald Faison is set to appear in the season 7 finale of DC’s Legends of Tomorrow as an unnamed mystery character seeking fame, fortune, and glory. While the character’s name is being kept under wraps, the provided description strongly suggests that Faison will be playing the time-travelling Booster Gold.

The official description reads: The Legends first encounter this character at a different phase of his career whose golden years are in the rearview mirror. He is a good guy deep down; his ego is looking for a boost that only fame, fortune, and glory can provide. While he claims to have been recruited to work for a mysterious time organization, he wasn’t offered much of a choice in the matter. As an unauthorized time traveler with high-profile aspirations, he developed a mischievous streak and cuts a few corners along the way to achieving his dreams. He knows all about the Legends of Tomorrow and finds them inspiring because they are the kind of heroes who started at the ground floor, as opposed to inheriting their powers from an alien planet, a spider bite, or wealthy parents. But the big question is whether his respect for the team is going to be able to help the Legends out of hot water or get them into hotter water!”

eOne has closed a deal with Red Notice filmmaker Rawson Marshall Thurber to creatively oversee a flagship live-action television series based on Dungeons & Dragons. Thurber will write and direct the pilot script as well as executive produce the hourlong project.

Adapting Dungeons & Dragons for television has been a big focus for eOne following the company’s acquisition by Hasbro. The flagship live-action series is expected to serve as a cornerstone of the TV universe as it continues to expand.

Thurber commented on the news via Twitter, saying, “Boyhood dreams do come true.”