5 min read
Add comment
FacebookTwitterRedditPinterestEmail
Treasure Stack is a light and fun puzzle game that really sucks you into each round and brings out the strategist in you. While I do wish that there was a nod to a single player campaign, the core game is a lot of fun.

Treasure Stack is a new entree into the falling-block puzzle genre – with a twist. Developed by the team at Pixelakes, Treasure Stack brings the formula of stacking matching blocks, adds in platformer elements, and requires strategic rearrangement for success. This indie game offers fast-paced mechanics and challenges the player’s ability to plan ahead and think on the fly. While games like Dr. Mario and Tetris do come to mind, Wario Woods back in 1991 on the SNES is the closest comparison that I can offer.

Normally, when an arcade puzzle-style game doesn’t have a story mode, that’s usually not at all a cause for concern. The story of Tetris? Who knows (yet the still plan on making a movie related to the game). However, it appears that a lot of detail went into making this game have not only a middle-ages theme, but there is a whole thematic trailer for the game that features a group of medieval treasure hunters. These characters and cinematics, however, do not appear in any form on either the games menus or in game which was something that I was definitely expecting. The single player mode is simply an endless arcade without any level progression or story telling elements. Even just an overarching background lore would have been satisfactory, but the lack of it is a bit of a letdown. 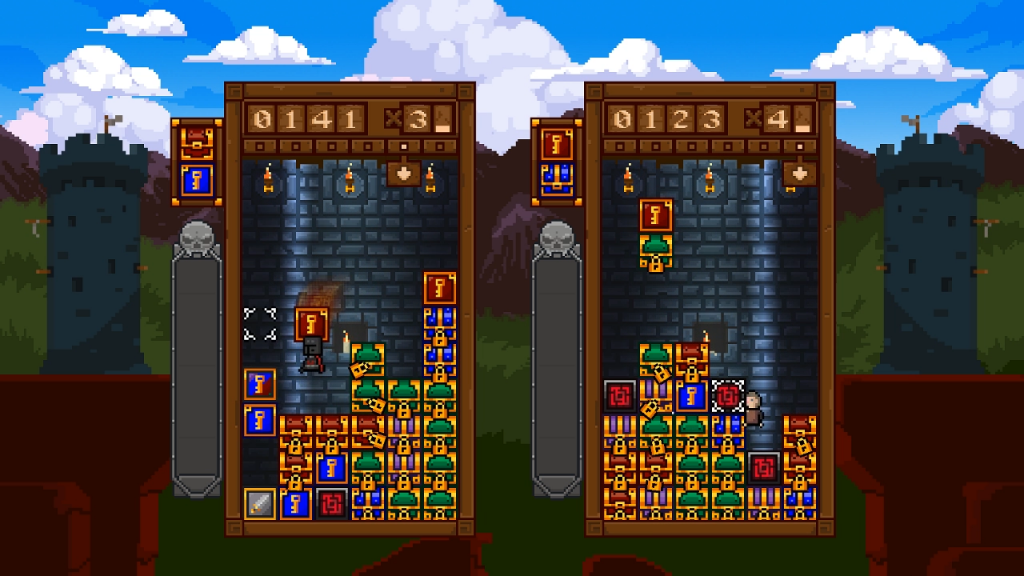 Unlike in most stacking games, gameplay starts and ends with the ability of your character on the screen rather than the treasure chests falling from the sky. The player has the ability to run, jump, pick up and put down blocks, and as a signature of the game, can use a grappling rope to pull down chests directly into their hands, rather than waiting for them to reach the bottom. Active platforming and rearranging of the blocks directly is the name of the game. Characters can move quickly, can lift an entire column of blocks, and have satisfying aerial speed. However, they can only jump one treasure chest high which is important to remember in order to not block oneself in.

Treasure chests come in 4 different colors and when they are stacked adjacent to each other, they don’t disappear on their own. Instead, they are “unlocked” with key blocks that make them disappear. The best strategy is to stack up chests of the same color together, so that when a key block is placed in contact with any of them, all connected chest disappear and are added to the player’s score. The longer the game goes, the faster the blocks start falling over time. If a column of chests reaches the top of the chamber, the game is over and the final score is tallied. In one player mode, points go towards unlocking new characters and grapple cosmetics.

Additionally, “demon blocks” will appear on top of each column to make things harder. These can only be destroyed by unlocking adjacent blocks or by using item blocks like bombs or anvils that occasionally appear. In multiplayer modes, clearing treasure boxes will add to the “demon box” meter for opponent(s) to disrupt their stacks.

The game features 2 multiplayer options. Online mode is limited to 1v1 head-to-head matches, but features both a casual lobby and a ranked mode that promises a 30 day season cycle. And there is cross-platform play for all 3 versions. Local multiplayer supports up to 4 players competitively.

One note about single player: Demon blocks are spawned automatically after a certain number of time has passed. And unlike multiplayer where the number of blocks is dependent on opponent performance, each spawning will be the maximum of 5 blocks. In my opinion, beginners may find that this feels aggressive, particularly as the game goes on and management becomes considerably difficult. 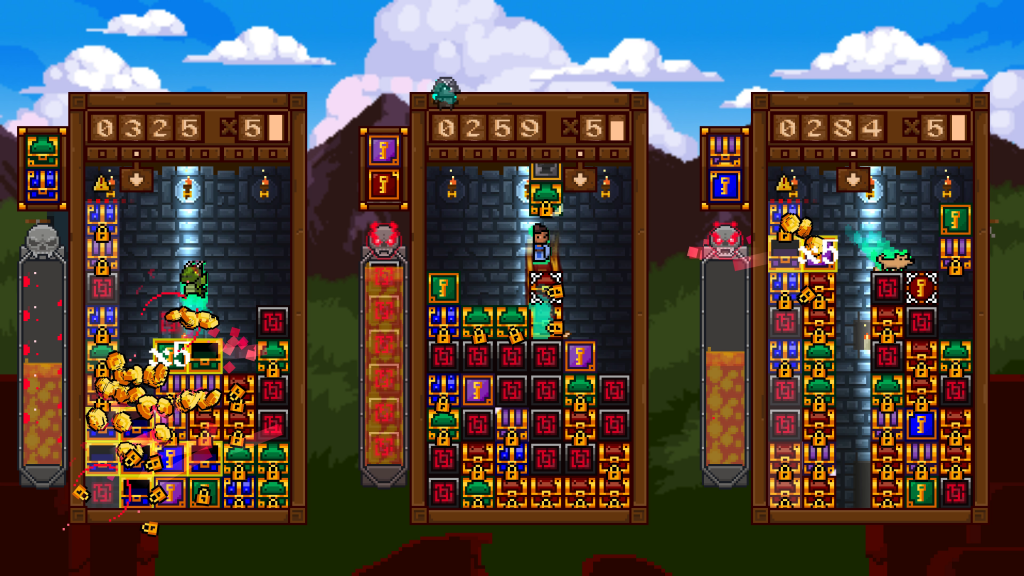 Treasure Stack’s main focus is on gameplay, but the music and graphics, while simple, are fun and welcome. There are only 3 songs in the game, all of which are adventure inspiring chip-tunes that fit well with the atmosphere of the game. The game’s classic sprite art features bright colors and a good use of contrast to make simple elements stand out. Rarely did I ever find myself unable to distinguish between objects on screen. The game also features over 100 unlockable character and grappling hook sprites to choose from that allows for some creativity in the players medieval appearance.

Treasure Stack is a light and fun puzzle game that really sucks you into each round and brings out the strategist in you. The gameplay is easy to understand but challenging enough to encourage playing for rounds at a time. While I do wish that there was a nod to a single player campaign, the core game is a lot of fun. The local multiplayer is great for friendly competition and the cross-platform online play is a very smart mechanic to make finding matches easier. In the day and age of patches and updates, a few quality of life tweaks would make this fun game a great addition to one’s block-drop puzzle-game collection.