5 min read
Add comment
FacebookTwitterRedditPinterestEmail
In its current state, Ghoulboy unfortunately suffers from compounding frustrations. Starting with a typo on the very first screen of the opening cut-scene, the game is plagued with a multitude of minor issues and a handful of questionable design choices.

Developed by Redro Games, Ghoulboy was released on both PC and iOS/GooglePlay in late 2017. The game is a retro-inspired puzzle-platformer filled with fantasy elements, simple hack-slash combat, and plenty of perilous platforming.

Ghoulboy‘s story is told in a series of still shots at the beginning and end of the game with only gameplay to fill in the details in the middle.

Taking place in the monster infested last of Gunzabar, Ghoulboy harkens back to the classic puzzle-platformers of the 90s. Thulgar, son of the legendary ghoul killer Galdar and nicked-named “Ghoulboy”, has taken after his father in slaying the demons of the land. And a prophecy has suggested that he will end the reign of the Ghoul King once and for all and rescue his imprisoned father. Throughout his travels, Thulgar faces dozens of enemies and a handful of bosses to rescue his dad and return peace to the world of Gunzabar. 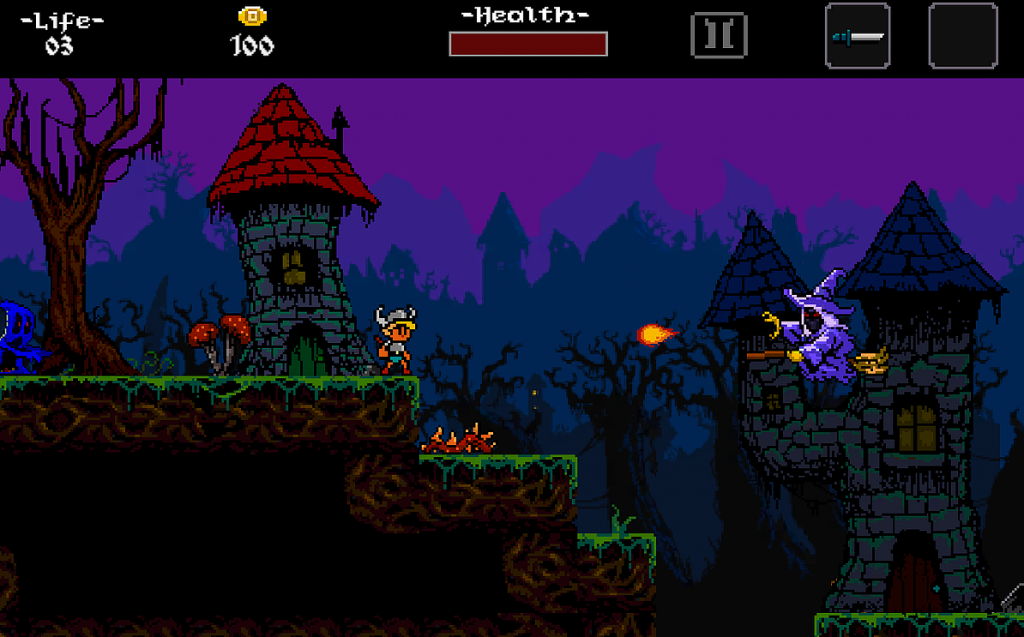 In its current state, Ghoulboy unfortunately suffers from compounding frustrations. The game is plagued with a multitude of minor issues, starting with typos in the intro screens and a handful of questionable design choices throughout.

While some promotional material describes the game as a “metroidvania”, I don’t think it quite fits the genre and simply fits the more general category of a puzzle-platformer. Unlike the great Metroid or Castlevania games, this game plays more like a standard left-to-right platformer with occasional doors or levels that need to be triggered to progress. The game lacks the grand exploration and environmental storytelling that truly makes a Metroidvania.

The game is divided up into acts with 4 levels in each. And aside from the display at the beginning of the act, there is no other way to tell which level you are on if one loses track or stops and continues later. Each act is designed with a unique setting (overworld, dungeon, etc…) but without a level select screen and no ability to go back to previous levels, playing the game can feel a bit disorienting in terms of knowing one’s own progress.

Most levels are designed well overall but a handful have very punishing platforming sections; although having a double jump from the get-go does help. One cool gimmick of the game is the required throwing a spear into a wall to create a platform that can be stood on. It’s worth mentioning that spears are tied to an inventory that needs to be replenished either from enemy drops or from merchants within levels.

Because this game has both bottomless pits and sections that require top-to-bottom exploration, I found myself performing “leap of faith” into a handful of unmarked areas which to some people may discourage exploration. In the other direction, there are many levels that have sections that can be skipped by abusing the throwing spear platforms to scale walls. Some of those areas have loot chests which shows that the developers were aware of this tactic but the amount of level that can be skipped in the earlier levels seems almost ridiculous (speed-runners rejoice).

Enemy design and placement is iffy at best. Some enemies can be attacked with a throwing weapon without getting close enough to trigger their AI. And others are placed on a platform above the player that is still within range of a swinging sword attack. There are also enemies that will home in on the character but will noticeably be limited in how far they can move from their spawn point allowing the player to stand just outside of it. As for boss battles, they are pretty easy with simple movement patterns and attacks that can be countered just by simple jumping.

Ghoulboy had the potential to be a simple game that would have been a minor but fun addition to the collection of indie-retro gamers but what appears to be a lack of quality control and testing covers up a lot of what shine may have been there. A handful of occasions resulted in a minor crash of the game while playing, some AI do not respond correctly to wall collision, and the fact that one can be killed while navigating in the merchant menu is a downright oversight. While I do not mean to bash on what was likely a passion project of a small developer, this game should have either been pushed back for more fixing or have been part of some sort of early-access program to sort things out. And I bet doing back to back builds for both PC and mobile devices took away resources that should been used to polish the game.

Since we do live in a world now where games can be updated and patched, there’s hope for this game, but it would take a serious overhaul for it to receive serious praise from me. It’s one thing to look like an old retro game, but to be successful it cannot feel like the throwaway retro games that left more disappointment and frustration than fun. As a short indie game it’s going for about $4 on steam and can be beaten in less than a couple of hours if you can get around its flaws.

+ Visuals and scenery capture the retro theme well and options to add scan-lines are a plus.
+ Player physics are reliable

– Typos and glitches suggest incomplete beta testing before launch
– Mediocre to poor enemy AI design
– Forcing the change of active throwing weapon when a different weapon replenishment is collected
– Forcing the player to return to the main menu to upgrade stats instead of having the “shop” accessible in game
– No level select, level replay, nor indicator to show which level is currently being played