4 min read
Add comment
FacebookTwitterRedditPinterestEmail
At times, this game was exciting and filled me with joy and wonder, but the majority of it caused frustration and anger.

Article by: Taudriel
Note: Key was provided by the game developer.

When first introduced to The Deer God, you’re smacked in the face with beautiful pixel art and a soundtrack to soothe the mind. It’s a cute platformer with a seemingly original narrative. One might think, “What a perfect game to relax and play.” One might be very wrong. At times, this game was exciting and filled me with joy and wonder, but the majority of it caused frustration and anger.

You start off as an unnamed hunter who quickly is killed by a wolf. After dying, you’re introduced to the one and only Deer God. You then are magically resurrected as a fawn. This whole premise had me excited and curious from the start, until about 3 minutes later when I barely made it into the first quest and got stuck with a pit of alligators forcing me to load from save.

Naturally, my frustration was minimal. This is to be expected when playing a new game. So, I trekked on only to AGAIN find myself stuck, in the same place, with no way out. I could kill the alligators but that seemed to give no resolve to the “I’m stuck” situation. Being an optimist, I chose to once again load from save and continue on my journey hoping that I’d make it past this pit. Mind you, my difficulty was on normal.

After cycling through this pit o’ madness upwards of 4 times I decided to explore my options and think a bit more critically. This lead me to a hidden cave in this alligator pit of hell. “ALAS! AN ANSWER! IT WAS ME ALL ALONG. USER ERROR!” My inner voice enthusiastically chimed in, regaining all of my hope in humanity.

Sadly, that inner voice was immediately squashed. As I exited this elusive cave of wonders I was now, somehow, transformed into.. a rat? A mouse? I don’t know what it was to be absolutely honest, considering I was also fighting off alligators and just generally trying to get the hell out of there. I then died, only to be respawned, once again as a fawn. Immediate thoughts were, “Why did I turn into a cave dwelling mouse rat? Is this going to help me find more abilities?” So naturally I tried this again only to find, even with the alligators dead, the mouse rat was no use and ultimately lead me to a plethora of unanswered questions.

I decided to disregard it and move on, hoping with more gameplay the answers would come. With the pit o’ wonders in my past and my attention now directed to understanding the basic mechanics of the game as well as stopping to take pictures of the beautiful pixel landscape and color scheme, my initial excitement and wonder was still intact. The fight mechanics were fairly easy, consisting of a series of head-butts against a group of potential enemies ranging from foxes, porcupines, snakes, birds, alligators, and even larger versions of these forest animals as bosses. While moving forward you can achieve new fighting mechanics like shooting fireballs from your antlers as well as destroying the environment to further your progression. With that said, many of the mechanics became repetitive after seeing all of what the game has to offer visually. This, on top of the silly “I have fallen and cannot get back up” bugs (that kept happening) are what kept me from enjoying and ultimately completing the game. 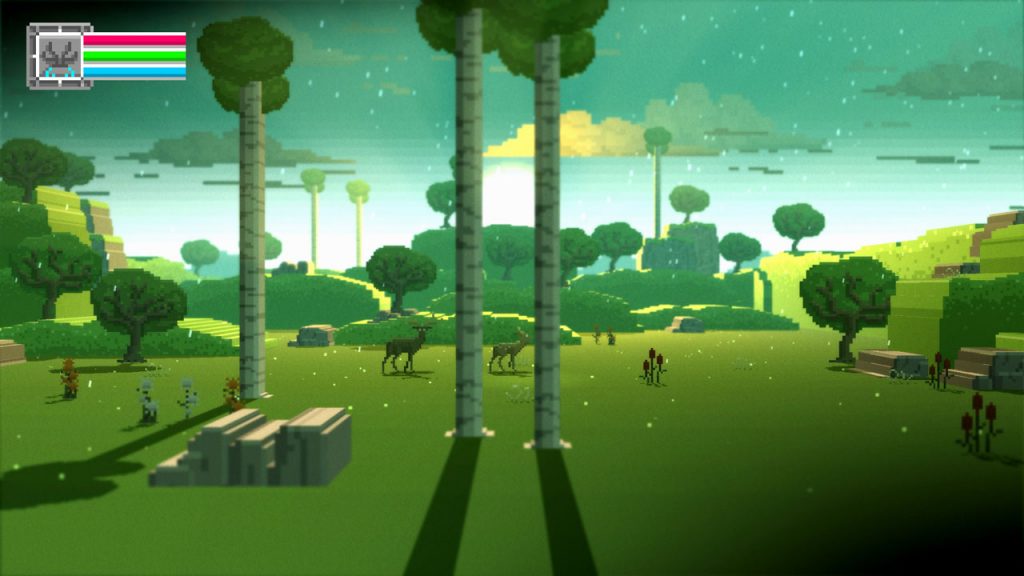 Although my experience was unfavorable, I am interested to see the difference in ease of gameplay on PC versus the Switch. If you are considering picking up this game I would definitely try it out on PC first. The game is stunning and the soundtrack is complementary to the visuals but sadly doesn’t evoke or even aid to the circumstances in the game. The Deer God is ambitious but ultimately had me filling in answers when the game wouldn’t, leaving me confused and lacking in purpose. While I prefer not being spoon fed, I can’t help but wonder if a few more hours spent on explaining to the player the purpose of each element would aid the overall user experience? In the end the bugs, the mysterious nature of the mechanics and reward system, as well as the general repetition are what keep this game from living up to it’s great potential.