5 min read
Add comment
FacebookTwitterRedditPinterestEmail
While the premise is repetitive, Dead by Daylight offers continuous replayability for a fun and scary experience.

Article by: Matt West
This review is for the Xbox One version of the game. Code was provided by developer.

Full disclosure #1: I have never truly been a fan of first person shooters. When I initially played Doom, I got motion sickness. Pretty much all first person games since then have had the same effect.

Knowing this information, it would seem strange that I would be interested in reviewing Dead by Daylight. I’ll admit I’m always looking for new experiences since becoming an Xbox One owner a year ago. Something stood out about the game where you could step into the shoes of the mass murderer and stalk victims through a battlefield. The game is a multi-faceted “asymmetrical” 1 vs. 4 PVP first person or third person experience. In Dead by Daylight, the player can choose to take the role of the monster, stalking the other players in first person, known as survivors or as one of four survivors attempting to escape the impending and stalking doom in a third person view. 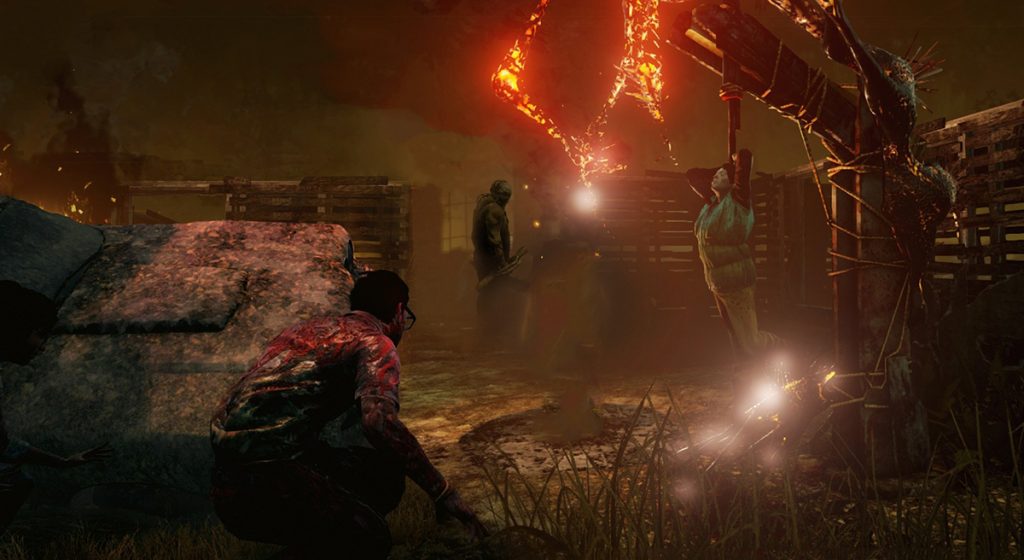 The game is not as simple as just killing or escaping. The survivors must sneak around and attempt to repair and start a number of generators, which in turn open two escape doors. The survivors’ attempts to repair generators, heal, or sneak around can all fail, making noises that will draw in the killer. The killer, on the other hand, lumbers around the battlefield listening and watching for signs of survivors. Along the way, the killer can damage generators in progress of being fixed. When the killer spots a survivor, the game can get very exciting and downright gory. The killer attempts to sneak up on or run to capture a survivor and will then use a variety of methods to injure the survivor. If successful, the killer can then carry the survivor to a sacrificial meat hook to leave the body of the survivor as a sacrifice to “the Entity”, a demon that devours the survivors. In the role of survivor, players can continue to fight off the killer, heal injuries, and even fight to escape the grasp of the killer or the meat hook.

The game offers a handful of options as the Killer and as Survivors. Strategies change with each character a player chooses. Personally, with the horror movie slashers I always liked, I spent most of my time as the Chainsaw-wielding Hillbilly. This killer endures pain better than some of the others while chasing down his kills with a chainsaw. Sneaking up on a victim and engaging the chainsaw is quite satisfying. In the role of the Survivors, these moments can scare the bejesus out of you.

Sound is very important in this experience. Little sounds like breaking branches and crowing birds can expose the location of the survivor to the killer. After a player gets really invested in the game, the simple sound of footsteps from behind can startle or raise goose bumps.

Graphics are strong in this game. The battlegrounds are fully fleshed out, providing interactive aspects for the survivors to use as disruptions while fleeing and for the killers to have to slow down to destroy. While there are as many as 5 players from different places all joining in the experience via Network connection, I did not seem to detect any lag or timing issues while interacting, pursuing, or running scared. 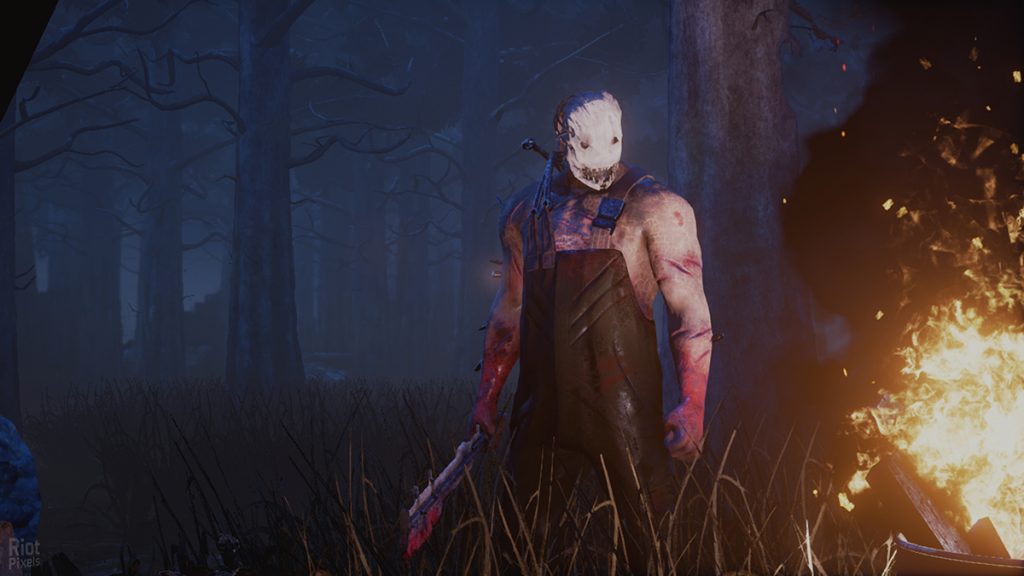 An exciting bonus is that a Halloween patch is forthcoming with DLC allowing the player to take on one of the most iconic Movie Monsters of all time, Michael Myers. Myers will have his own set of abilities, built around obsessing over one survivor. Strategizing by leaving that survivor as the final victim, stalking and terrorizing, will lead to a stronger, more lethal Michael Myers.

The biggest weakness I found was loading times. Once a player has chosen to be a killer or survivor, the time to load the level and players seemed excessive to me. Another thing that slows the beginning of play is the lead time given to the survivors to flee and hide. As the killer, you just have to sit and wait it out. This might have been an effective time to drop some on-screen play hints for the person waiting to play. Loading times are a necessary evil, but the location of these waits in the scheme of the game was initially quite annoying until I was able to anticipate them.

The bottom line of this game is that it’s really fun, and although the premise is repetitive, the playability continues to remain entertaining time and time again. Fans of the horror genre would likely find another level of entertainment in lowering the lights, playing with headphones, and as a survivor. Attempting to sneak around the battleground and evade the killer can literally build real-life tension and adrenaline. I’m hoping to find some people I know who play, rather than just the random online folks. I’m sure playing with friends adds that additional layer of entertainment. I anticipate taunting each other as near misses or kills occur.

Overall, I’d definitely recommend this game and give it two horribly amputated thumbs up for a fun and scary experience. If you think you can survive, give me a yell at DrMattDawg73 on Xbox Live.