8 min read
Add comment
FacebookTwitterRedditPinterestEmail
Shardlight has promises of excitement when you first boot it up, but it plays it very safe and unfortunately ends up being a bore.

I’ve been playing point-and-click adventure games since I was a little kid—in fact, they were some of the most memorable games I played back then. Sure, there were always the staples like DOOM, but the ones that really stuck with me were the titles like Full Throttle and Quest for Glory.

Both of those games had something really unique that made them exciting to play; Full Throttle had fantastic voice acting, atmosphere, and combat while you were on your bike. (It was clunky, but man was it ever exciting back then.) Quest for Glory had something new and surprising around every corner, sparking curiosity, exposing you to danger, and threw in an RPG leveling and stat system to boot.

Shardlight has promises of this excitement when you first boot it up, but it plays it very safe and unfortunately ends up being a bore.

You play as Amy, a young girl with a red cloak, who at the beginning of the game has been sent on a ‘lottery job’ that entails repairing a reactor for the city. Deep in the reactor she meets a man who’s been crushed by a collapsed wall. She introduces herself, and upon learning her surname the man gives her a letter that he says must be delivered to someone named ‘Danton’. He claims the letter is of the utmost importance and that Amy will never have to worry about playing the lottery again so long as she delivers the letter safe and sound. After a lot of back and forth he finally convinces Amy to put him out of his misery. 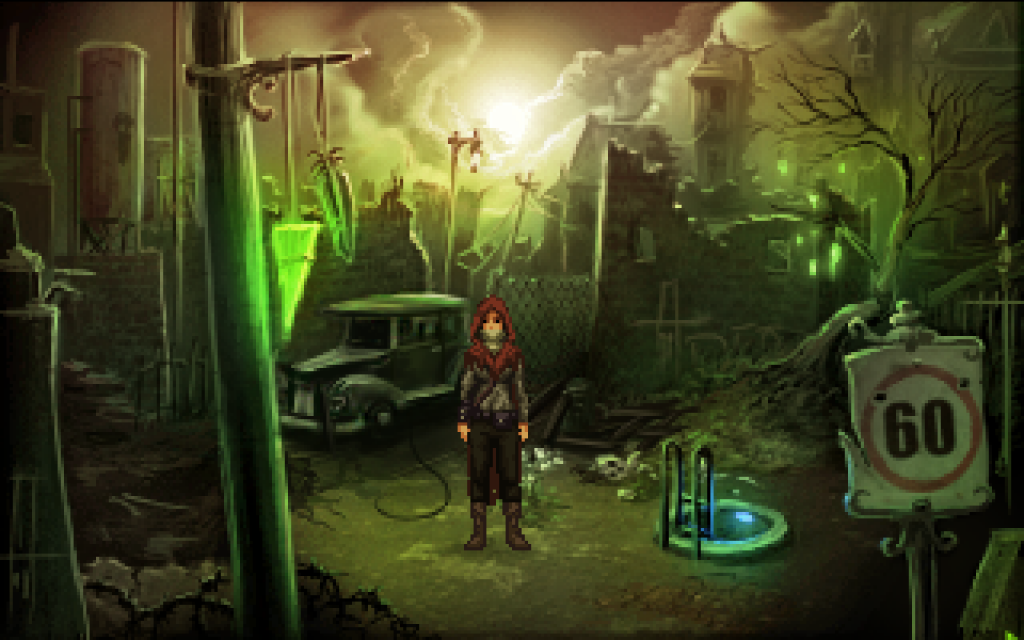 It’s a rough start. The game spends a lot of time around the drama of this man’s death; but it feels really hollow. Part of that is the dialogue and the voice acting, but most of it is that you just don’t have a reason to care. We live in an age where a gamer executing a virtual character is an event a hundred times more frequent than them brushing their teeth. We have games like Mass Effect and The Walking Dead that build relationships with characters over 40 or 50 hours and then you watch them die and it can be devastating. If they instead died in one of the first scenes, would you care?

Shardlight never really surpasses missteps like this and is rife with clichés. Anyone who’s played or read any post-apocalyptic piece of fiction is pretty familiar with the concept of some warped version of the lottery. This world’s particular version of the lottery is one where the prize is a vaccine for an incurable disease called the green lung, and doesn’t feel particularly insidious compared to modern incarnations of this concept like in The Hunger Games. 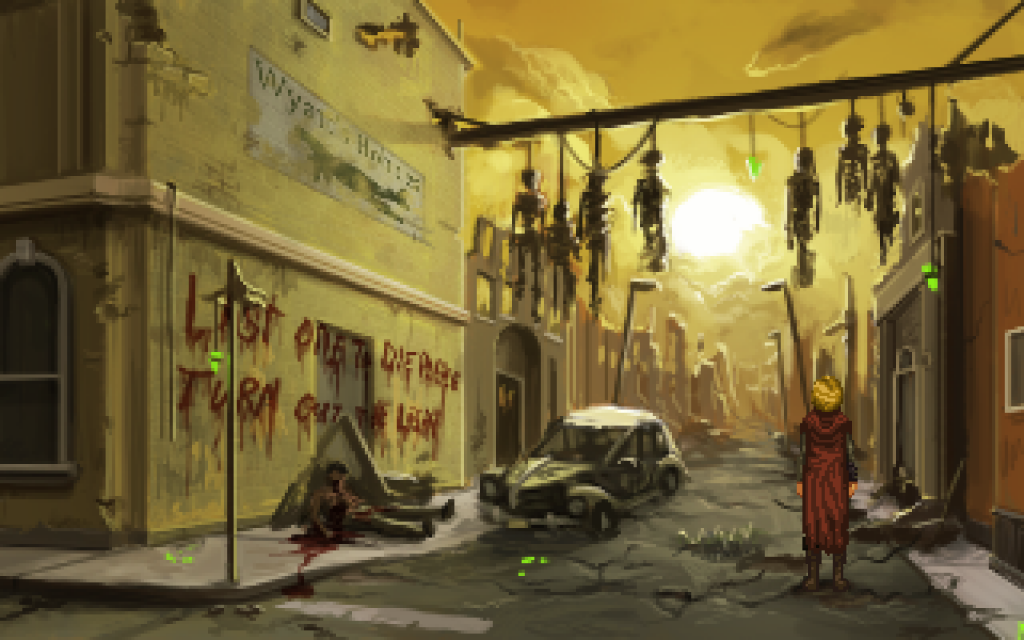 That wouldn’t be so bad if at least the characters were interesting, but by the time you’re deep into the plot about the Resistance, there’s no one to care about. Amy is a flat analogue for the player, never really expressing any opinion other than sadness at how poor and broken everything is, and nobody else you meet seems like they’re actually people. They seem like puzzle pieces.

Gus sells meat. Marichka sells food and vegetables. Gordon sells general items that no one buys. All of these are good to know when you need stuff to solve the next puzzle, but they’re not very interesting character traits. The only other ‘unique’ thing about them is that they all hate the Aristocrats and want the Resistance to overthrow them.

You end up not really caring about them, the Resistance, or the Aristocrats—so unless you really love pointing and clicking it’s difficult to find a reason to keep playing. There are some twists later on, but it’s so late in the game by that point that you don’t care enough about the story for them to matter.

The music in Shardlight is fitting, but unmemorable. You won’t find yourself humming any of the tunes from the game or hunting down the soundtrack after you’re done, but it sets the mood appropriately.

My real gripe with the audio comes with the voice acting. It ventures from passable-but-hollow to just outright bad. Every single dialogue in the game is voice acted and, while that’s an admirable level of effort to put in, because of the one-note performances it only serves to pull you out. You can, thankfully, turn it off in the setup menu before the game launches; but it’s unfortunate that removing the voice acting actually increases your immersion.

Shardlight has some really solid visual design, and it’s arguably the best part about the game. The backgrounds in particular have an attention to detail that really lends to the setting. You’ll see the giant, hulking Aristocrat Ministries in one location and the intricate decay of a back alley in another, and in yet another there’s a rusted out train in the middle of nowhere with the wreckage of the city far in the distance. 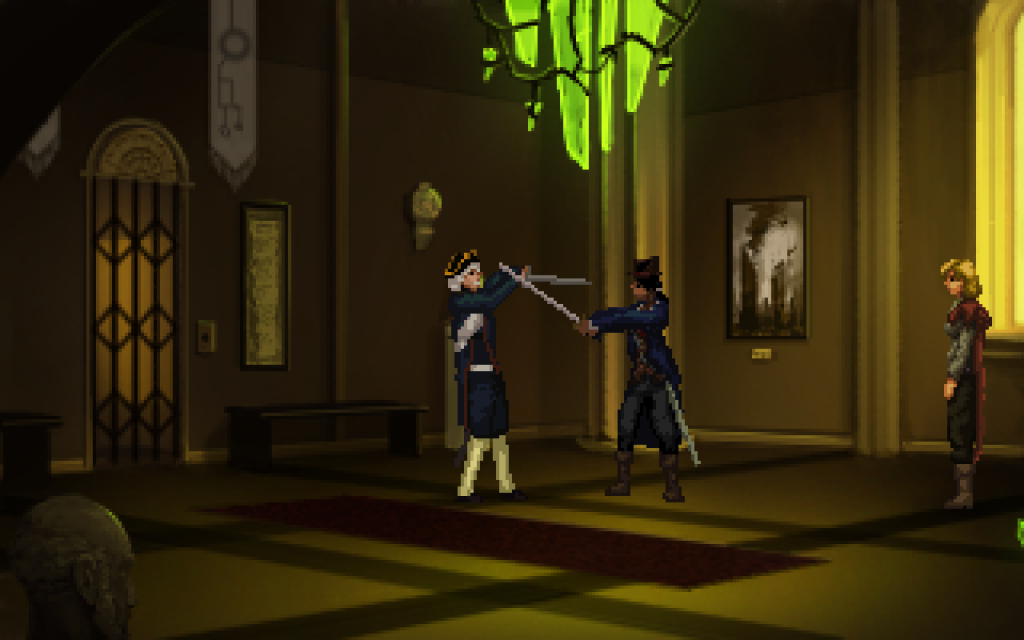 The character design is fairly standard for this setting, though I liked the touch of the Aristocrats guards all wearing 18th century military uniforms. Tiberius, Amy’s contact at the Ministry and main antagonist, deserves a special shout-out for his design—in addition to the uniform he wears a judge’s wig and has a gas-mask/Guy Fawkes/powdered-and-blushed face plate strapped to his head that’s particularly unsettling the first time you see it.

The screenshots speak for themselves. I really enjoyed the style of Shardlight, but what you see is what you get—if you don’t like the screenshots you’re not likely to find something new in the game to your liking and vice-versa.

Shardlight is a very typical point-and-click adventure game. Left click is to interact and right click is to look at stuff, though the game never actually tells you this. Normally that wouldn’t be a problem but some objects yield the same voice line whether you’re trying to look at them or interact with them, so you may not realize the difference between the two until mid-way through the game.

It mercifully avoids most of the pixel-hunting that plagues the genre from time to time—generally if an item looks like it might be useful, it is. There are a few times where you have to look at or interact with a very particular (and sometimes hard to notice) object before it unlocks dialogue or a scene somewhere else, but most of the time it’s pretty clear where to go.

There are a few puzzles, but they’re pretty easy to solve if you’ve been paying attention, which I think is to the game’s credit. Most of the time you’re playing a point-and-click adventure for the adventure, not the point and click or the puzzles, so when they avoid the trap of trying to be like Myst, I’m always thankful.

The highlights here are the puzzles that require you to do some research and then combine things you’ve found in order to defeat it. I don’t want to spoil anything, but doing the research and finding the items required is never a chore because the game is usually clear about where all your resources are without beating you over the head with it. This avoids a lot of that ‘What do I do next?’ frustration that can often be a pitfall in games like these.

There’s nothing really new here though, and if you’ve played any point-and-click games in the last decade, you won’t be surprised by Shardlight’s offering. 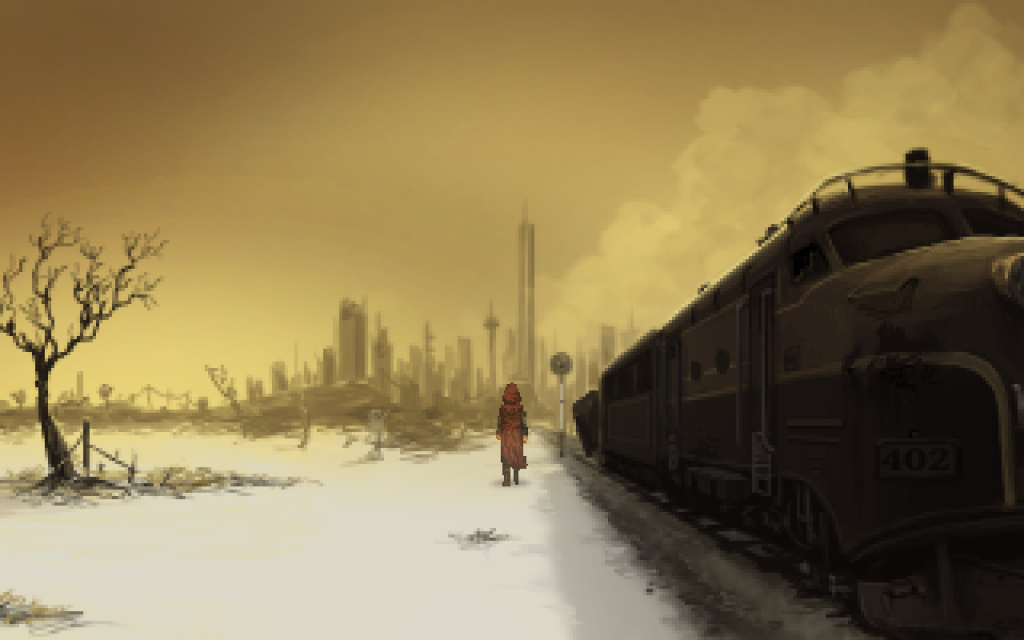 Shardlight is a game that sadly doesn’t live up to its potential. The mediocre writing and voice acting really left me wanting more, and I found myself struggling to get through the game despite the solid visuals and pain-free gameplay.

While the game doesn’t add anything new or stand out in an already anemic genre, it’ll scratch the itch if you’ve exhausted your library and are looking for something to play.