Bear With Me: Episode 2 – game review

The title of this game is a pun, and that should tell you right away that you’re going to have an unusual adventure when you press start. Bear With Me is an episodic detective noir point and click adventure starring a young girl and a private eye stuffed animal living in her closet, Ted E. Bear. Together they are on the search for Red, the dastardly arsonist plaguing the streets of Paper Town, a village she made in the attic as a young girl.

The game bears a faint, lingering grief of what it means to grow up and lose interest in your imagination and your old toys, but it’s also brimming with a satirical humor that had me replaying conversations just to relive the sassy punchlines. Bear With Me pokes fun at itself and the often convoluted and obscure solutions to puzzles typically found in the point and click adventure genre, while still making you do them. There is a lot to love in Bear With Me; the art, the voice talent, unique characters, saucy dialogue, carefully placed puns, and breaking of the fourth wall- all of this has blended together to create a narrative that has me hooked. I want to follow Amber and Ted on their cheeky adventure into Paper Town. And even though I have a feeling I know exactly where this adventure leads (we all have to grow up sometime) I still want to take the journey. 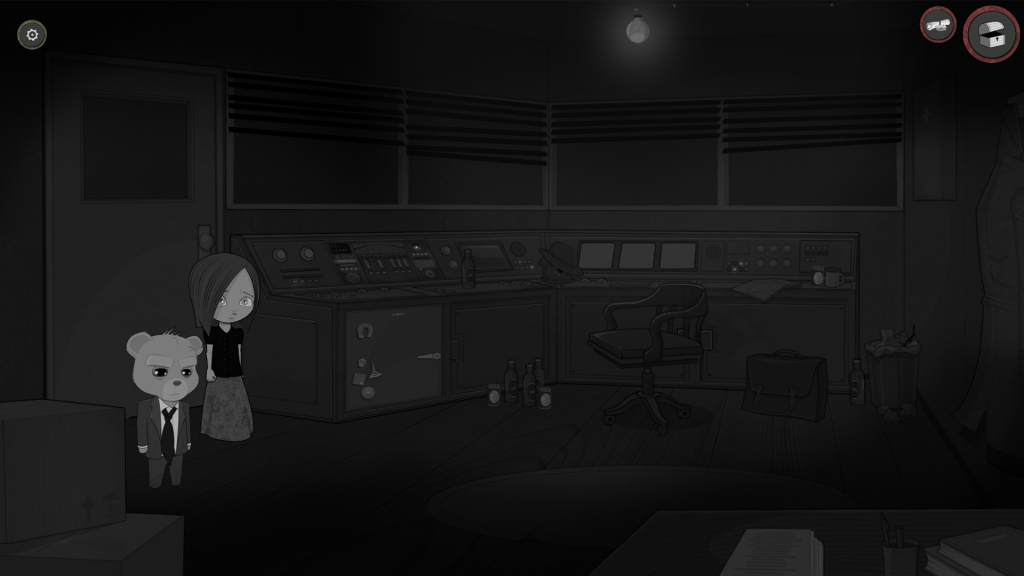 The gameplay of Bear With Me is pretty straight forward, as most point and click adventures are, however there are some minor issues with consistency in the mechanics. In most instances, a change in your mouse cursor icon will show up when you can interact with something in a new way. But this isn’t always the case, which leaves the player sometimes confused and artificially stumped on a puzzle if they’re relying on the known game mechanics to show them the edges of their sandbox. For example, at one point during the Casino segment, I wandered around everywhere looking for clues to progress but I didn’t bother clicking all the way on the left hand side of a scene because there was nothing to interact with. Every other time the cursor would change to indicate when I could continue moving in that area. Turns out I just had to walk Amber and Ted to the edge of the screen to reveal more to the scene. This isn’t a problem as long as it’s established early on in the game, but in this instance, it wasn’t. And it was only ever in this one instance, it never happened again.

The art style is amazing, and I really feel like it lends itself to the aesthetic of the game. The game is in grayscale, with the occasional symbolic splash of red, and while the art style is reminiscent of a cute child’s storybook, it has a darker edge to it as well. Amber’s face looks almost constantly sad and in pain, which lends itself to the story I feel is unfolding. And the biggest love for me is the dialogue and voice acting. You’ll want to click on everything just to see what the sassy Ted has to say next. There were so many references to other, older point and click adventure games (I see what you did there with Indiana Jones and the Fate of Atlantis), and to the noir genre in general. I can’t wait to play the upcoming chapters. 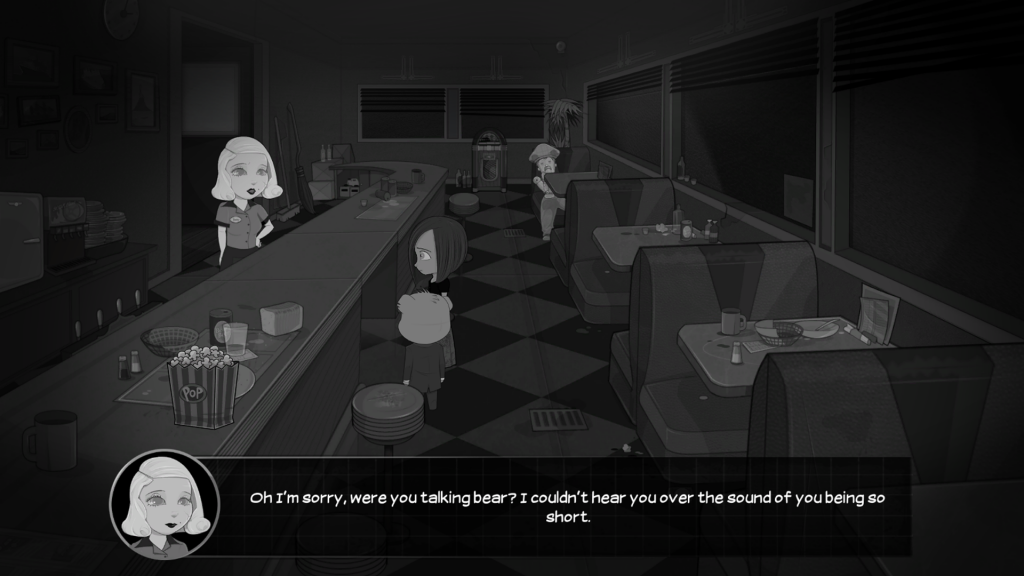