7 min read
Add comment
FacebookTwitterRedditPinterestEmail
Rimworld is definitely not for everyone. It is casual but hardcore, it is simple but complex, it is futile and meaningless but somehow you create the meaning for yourself.

Rimworld is a science fiction-themed resource management, strategy game that places you in control of the development of a space-colony on a distant world. As a procedurally-generated world with randomly generated characters and events, no two playthroughs will be the same.

There is no storyline; there is only life, death, and the details that come in between. As previously mentioned, your initial starting conditions are, or at least can be, randomized; perhaps you are a marooned explorer, perhaps you are a primitive tribe, perhaps you are merely settlers. Rimworld drops you into the action with limited resources and no clear sense of direction or purpose beyond surviving through the night (unless, of course, you choose to go through the tutorial, which is quite helpful). There is an overall goal of developing a sustainable colony, advancing your technology, and venturing back into the void of space… but this is not where the game shines. 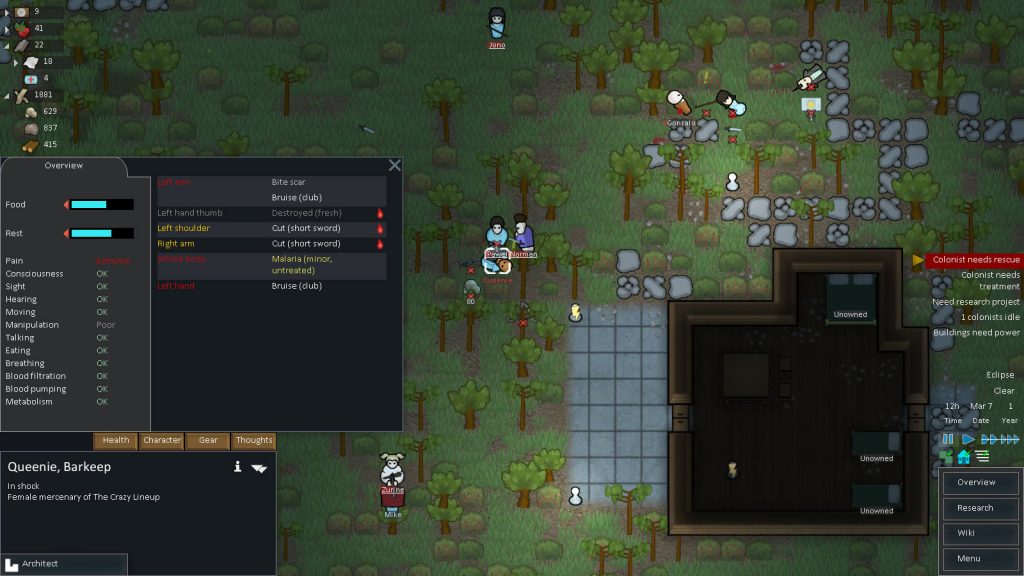 Here is the kind of thing that happens: Milo is a colonist. Milo had a family, a job, a pet, but life on the Rim just got to be too much for poor Milo. His last days on the Rim were spent in the med-bay before succumbing to severe infections and blood loss. The doctor and other colonists kept asking why he did it? “Well,” he explains, “ it was so hot.” A solar flare had knocked out the electrical grid several days prior and this summer the colony had been experiencing a heatwave. “And she kept telling me to do it…she wouldn’t shut up…!” … Milo is speaking of his pet turtle, well, former pet turtle; she died the previous Fall after a band of raiders tore through the camp. She got stuck in the crossfire and, well, couldn’t dodge a bullet. He spent months grieving, visiting her grave daily, sometimes multiple times a day… until finally, after isolated in his room for days, refusing to eat or sleep, he emerged one night in a cannibalistic fugue, attacking anyone who got in his path. He had to be taken down.

Yes, this kind of thing happens. Okay, not “exactly” this… there is no dialogue, you kind of have to make up the story for yourself. But the story of Rimworld is found in the minute details of the daily struggle to survive against nature, your fellow man, or maybe some unspeakable horror from the deep, dark, depths themselves. Maybe your people will survive, but no one lives without gaining a few scars. Colonists die. Pets die. People get depressed and stressed and go crazy. And those scars are the story.

Gameplay is simple to understand but difficult to master. You play God, or some facsimile thereof. You tell your colonists what resources to gather, what to build and where to build it, what to wear, what jobs to do, etc. However, they do have minds of their own and will prioritize their own actions, and they will refuse to do some forms of work. Sometimes they get stressed and have a mental breakdown and refuse to do work, or worse, as we see with Milo above. There is nothing particularly unique about it if you are familiar with the genre. It takes its cues from Prison Architect and Dwarf Fortress and it is executed well. 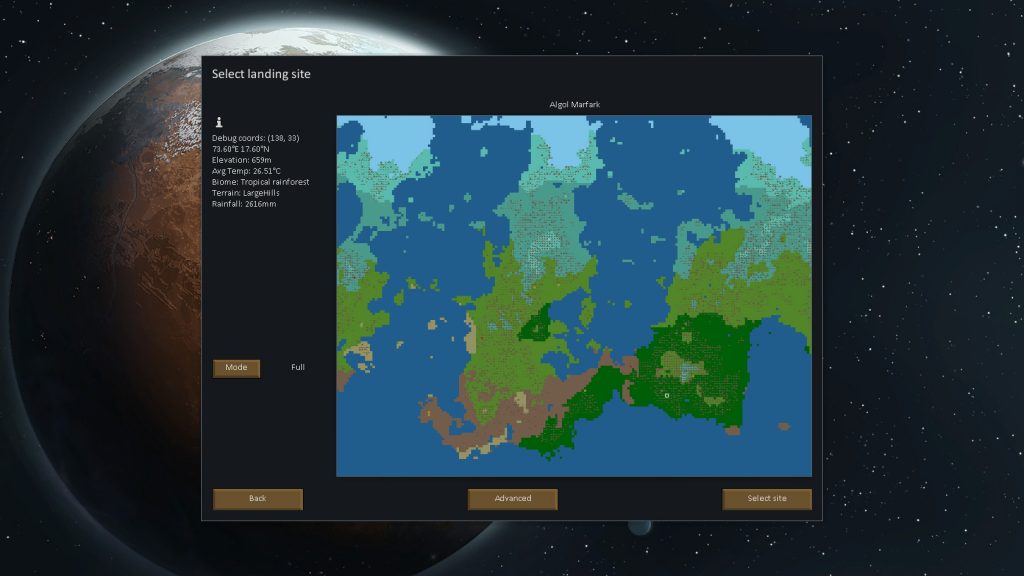 Upon starting a new game, you are given the choice of three scenarios or random generation:

Upon choosing your starting scenario, you are given the option to choose the ‘AI Storyteller’. This is an interesting concept that gives you three general gameplay types each subdivided by five difficulty levels. There is a storyteller that progressively and steadily increases the difficulty of the game, one that is for the more casual “building focused” player, and one that simply randomly throws whatever crap it wants at you.

After choosing your difficulty and gametype, you provide a seed-word which allows for the procedural generation of your world and you choose your starting location, or you can have it chosen for you.

Stylistically, the game’s visual design is very simply animated. Characters are little more than a head and a torso; they don’t even have arms or legs.

The developer has taken a page directly from Prison Architect, going as far as to say:

“…they do look somewhat similar; that’s my fault. I’m not a good enough artist to come up with a really good original look. There are only so many ways to render characters on a tiny grid without using animations.

I hope the differences between the game will be enough for people to look past the aesthetic similarities. And if I get some funding at some point I can get an artist to help develop a more unique look.” [source]

While some may find this to be annoying or problematic, I actually agree with the developer in that it is a sufficient means of conveying the action and keeping the gameplay flowing. Not everything needs to be completely unique.

As for the environment, the various biomes of the planets are presented in a very cartoonish manner. The tiles themselves are very detailed and fit together seamlessly and there are stark differences in the biomes themselves.

Additionally, environmental effects occur. When there is an eclipse, the days go by darker; when there is a heatwave, everything has that wibbly-wobbly shimmer to it. 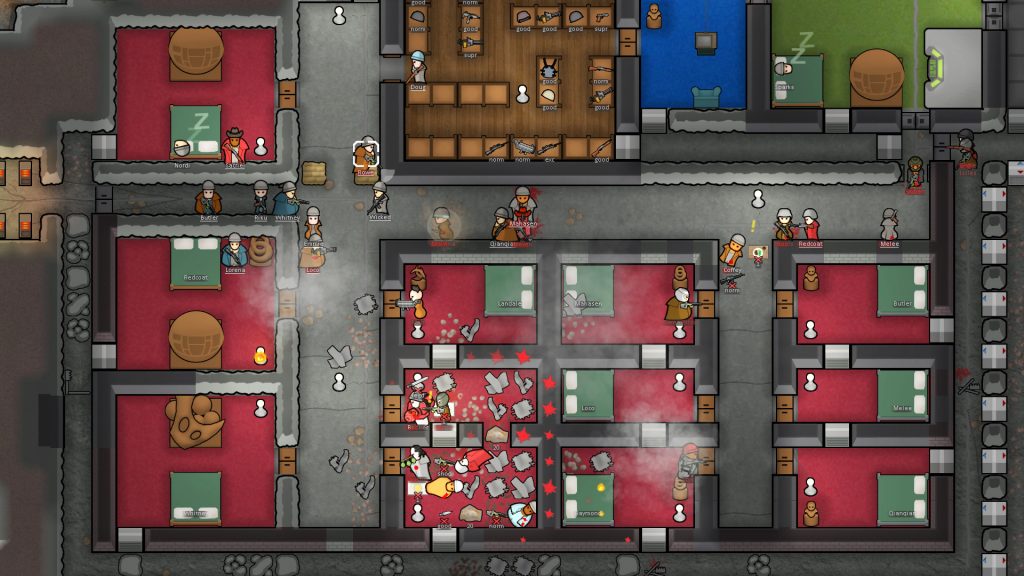 General sounds are nothing to write home about, however, Rimworld‘s musical soundtrack is impressively fitting. Alarms and gunshots are pretty standard fare. No one speaks. There are a few literal bells and whistles, but sadly none metaphorically.

However, the musical soundtrack has a southwestern, Route 66, alone-in-the-desert vibe similar to Rebel Galaxy or Firefly. It is one that gives you an impression that you’re on your own and you better get your six-shooter, ’cause things are gonna go down.

Getting beyond the graphics and audio, this game is as frustrating as it is fun. Every playthrough is different. Everything can seem to be going well at one moment, and the next, your entire village is on fire and everyone is dead with you left wondering, “what the hell just happened?!” You will build a settlement and everyone will die. You will build another settlement and everyone will die again. But it is okay because, sooner or later, you’ll get the hang of it and your colony to survive a bit longer, and a bit longer, and a bit longer, and maybe one day your meager colony will become a megalopolis… that is up to you.

Rimworld is definitely not for everyone. It is casual but hardcore, it is simple but complex, it is futile and meaningless but somehow you create the meaning for yourself. Considering that the game is still in early access, that it’s based on a well-designed system, and that it already has a vibrant modding community, the possibilities are limitless.

+ Casual
+ Incredible replayability
+ Simple but well-designed
+ Great ambience
+ Deep storytelling if you can read the scene, or just make up your own