4 min read
Add comment
FacebookTwitterRedditPinterestEmail
Party Hard is a stealth strategy game where you have to kill everyone at a series of parties, which would be pretty dark and depressing if it wasn't so ridiculous.

Party Hard is a stealth strategy game where you have to kill everyone at a series of parties. It starts off with the protagonist being sick of next-door neighbors having loud parties at 3am, and goes through a series of massacres around the US. The story between each party scenario is told from the perspective of a detective that’s following the case.

The mechanics of Party Hard are quite simple even if the stealth element can become more complicated. As the slasher at the party, you have one button to stab, one to interact with objects, and one to dance the night away, the latter of which can cause other party guests to join in, walk away in disgust, or give you a swift punt.

If you wanted to, you could beat each level by stabbing everyone at the party, but not only is that the more laborious approach, it’s also much less fun. Strewn throughout each level are items within the environment that you can interact with to help slaughter the annoying masses. Some of these include poisoning the punch, electrifying puddles, and rigging a stove to explode. As stabbing a victim within eyesight of another party guest will gets the cops on your tail, employing these environmental hazards is also the safer route to victory. 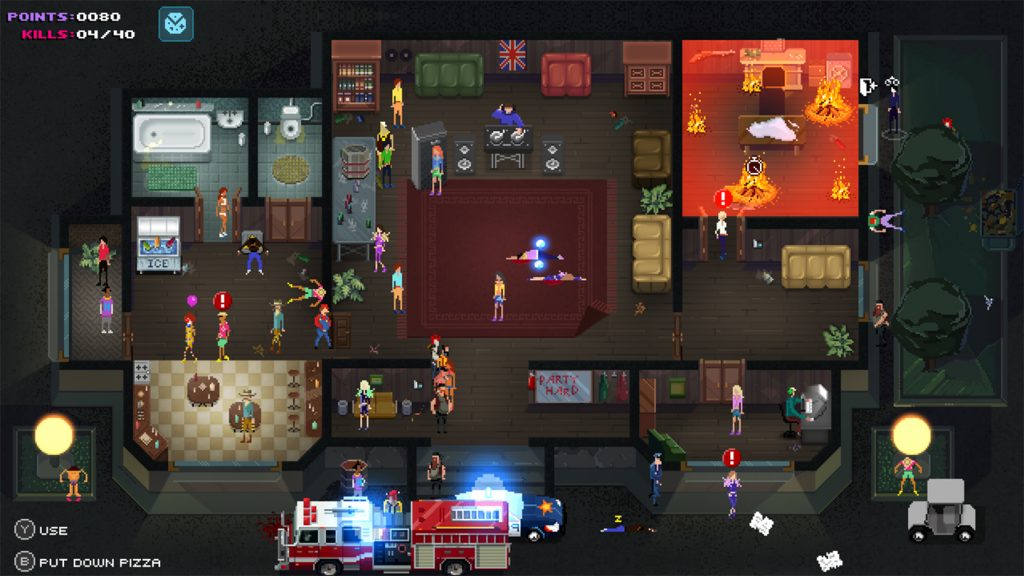 It’s here that one of the issues with Party Hard arises. As environmental hazards are the most fun to employ and the safest way to off a large group, it’s likely that they’ll be used up pretty quickly leaving you with only your knife to rely on. During my time playing, I’d say that the last third of each level was spent waiting around for a party guest to isolate themselves before I stabbed them and threw their body into hiding. This made the enjoyment level of each stage start off high and slowly decrease as I came closer to victory, resulting in a dropping satisfaction curve that generally goes in the other direction with most games.

There is, however, a lot to be said for the tongue-in-cheek humor that’s a common thread throughout the game. After all, this is a game about a serial killer who goes on a massive killing spree because he couldn’t get a good night’s sleep. Maintaining an element of humor is vital to keeping the concept from going to a very dark place. This is accomplished by adding elements of parody (like a plumber that closely resembles Mario) and concepts that are just downright absurd (like dancing bears and alien invasions).

Party Hard also features Twitch integration for streamers, allowing viewers in chat to occasionally vote on a variety of scenarios that will effect the level. For instance, as I was getting close to completing one level, my stream voted on releasing carnival performers into the party, which added more than 10 people to my future hit list. The Twitch integration isn’t robust, but I appreciate any game that puts in the effort. 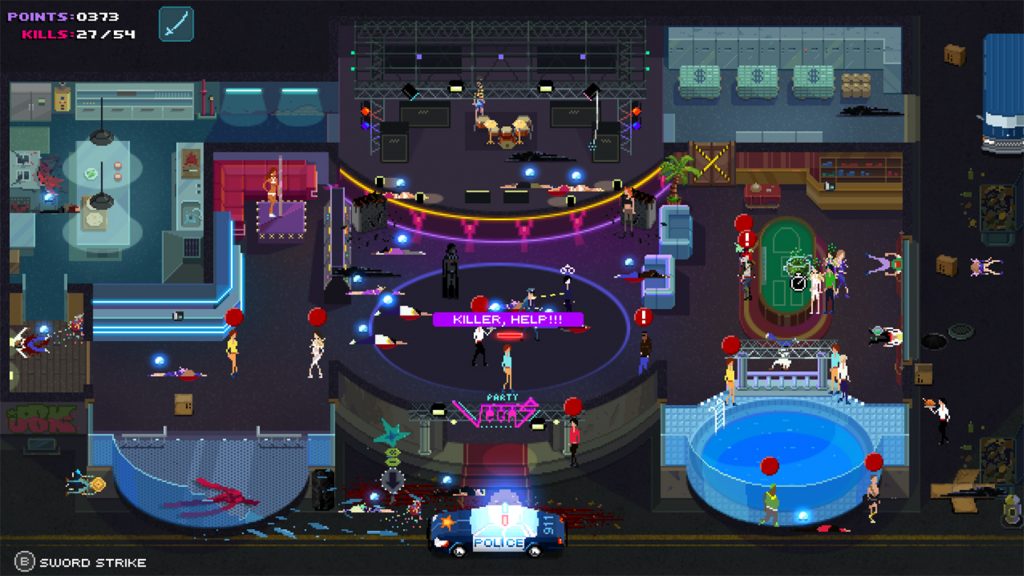 Party Hard has a pixel art graphic style reminiscent of Hotline Miami. It’s probably one of main reasons this kind of mass murder game works. With more realistic graphics, things could get gory and obscene very quickly, but the pixel art never lets you forget that this is just a video game… unless you somehow know people that have blocky blood. Parties are crowded with different characters that stand out from one another, and environmental hazards have targets that appear as you approach them. There’s even a button dedicated to highlighting all the items that can be interacted with so that you can properly plan out your attack.

The music is another strong aspect of Party Hard, which features an 80’s-90’s electro-pop soundtrack. While I sometimes opt to turn down in-game music, this was never the case with Party Hard as its a vital piece of the overall tone of the game. Several viewers in my Twitch stream also commented about how much they enjoyed the music, which is not something that happens often.