6 min read
Add comment
FacebookTwitterRedditPinterestEmail
KLAUS follows an office worker who wakes up in a basement with no idea of who or where he is. With his only clue being the word "KLAUS" written on his arm.

KLAUS follows an office worker who wakes up in a basement with no idea of who or where he is. With his only clue being the word “KLAUS” written on his arm, he’s forced to escape the mechanical and constructivist world in which he finds himself a prisoner.

As mentioned in the summary above, KLAUS is a mystery that unfolds over the course of the game. It begins with Klaus talking to himself, but then his attention shifts to you. Klaus has what comic books refer to as cosmic awareness, in that he’s able to break the fourth wall and directly address you, who he accurately refers to as “Player.” Klaus will also encounter a second playable character who simply goes by K1, a larger brute who has a different attitude toward the predicament both of you are in.

You control both Klaus and K1, often simultaneously, to explore 34 levels spanning 6 worlds. While journeying through these worlds, you’ll slowly uncover who Klaus and K1 are, their origins, and what they’re doing inside this strange building.

While the unfolding mystery will keep you heavily invested in the game, the story has some elements that are stronger than others. It excels in asking existential questions and exploring different sides of them, but doesn’t force any one answer down your throat. It’s much more about the questions than the answers, the journey more than the destination. It’s also interesting to see how Klaus and K1 treat each other and the way their relationship unfolds. Since they address you directly, they reveal deeper thoughts about the other to you when they’re separated from one another. 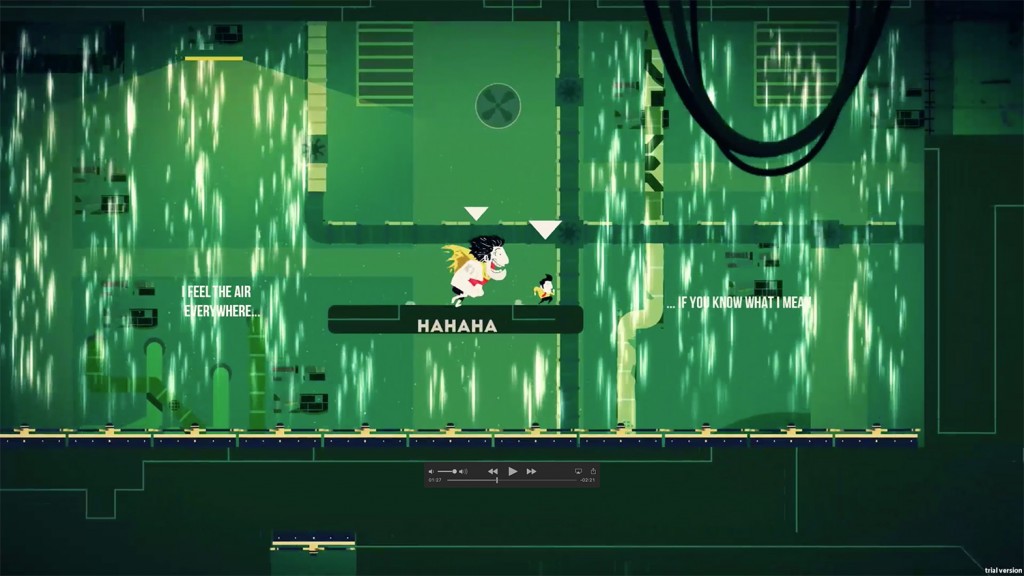 There are a couple aspects of the story that I wish were a bit stronger. I can honestly say that I wasn’t overly surprised by the mystery reveal, as the game borrows heavily from tropes I’ve seen before. That’s forgivable though, because again it’s really about the journey more than the big reveal at the end. Also, there’s a part at the end where the final boss reveals a major plot point to Klaus by just telling him to look closer at the tattoo on his arm. Somehow Klaus went through the entire game without noticing something incredibly obvious, and that’s just weird.

There are also hidden portal areas throughout the game, and completing a series of these reveals more backstory on Klaus. These are essential to understanding the full story, so leaving them as optional feels problematic, especially when levels can’t be replayed to search for them until the story mode is almost complete.

Klaus is a puzzle-based platformer that excels in its level design and takes full advantage of PS4’s unique controller. Klaus and K1 are both controlled in traditional fashion, but holding down one shoulder button allows you to control both at the same time. There are times where this is appropriate, while other times not as much. Klaus has the ability to double-jump while K1 can glide, so getting through puzzles often requires you to control each character individually, repeating the puzzle for each. Aside from controlling Klaus and K1, you also have a direct impact as you can use the Dualshock’s touchpad to interact with the levels themselves, both by activating doors and moving platforms.

While it’s nice to see a game take full advantage of the Dualshock’s abilities, it can at times be frustrating to try doing so much at the same time. Holding down one shoulder button to control both characters, while holding down another to make them run, while also moving the touchpad toward a door and trying to make them both jump can result in quite the finger pretzel. It’s not impossible and these situations aren’t frequent, but the dexterity required for such maneuvers might alienate casual gamers.

That being said, the creative gameplay and wonderful level design make Klaus a game worth experiencing. Your failures will make your successes that much more sweet, and at times failure is even encouraged.

Also worth noting are the hidden portal areas that I mentioned earlier. These are even more stylized than the regular levels of the game, and offer unique puzzle elements with varying levels of difficulty. I enjoyed breaking up the regular gameplay with these smaller sections. 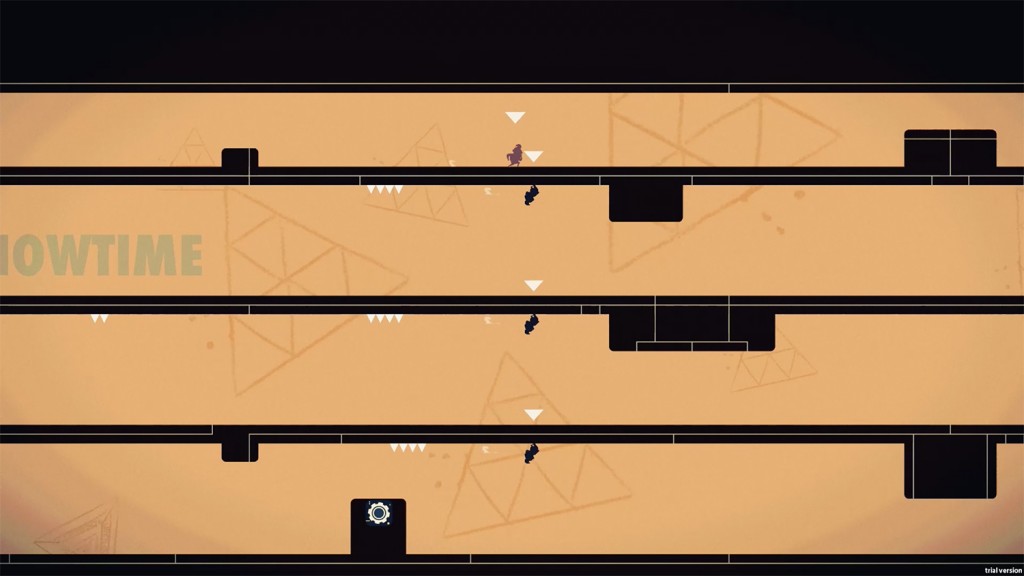 The game is presented in a minimalist format, which works quite beautifully, allowing the player to focus on the characters, puzzles, and narration text. While other games would use voice-over or speech bubbles with cutscenes to allow the characters to express themselves, Klaus presents character dialogue through text that is integrated into the levels. This text appears within platforms and other level elements as the characters progress, and the execution of the integration will make graphic designers applaud. In fact, as someone with a degree in graphic design, I enjoyed the visual experience almost as much as the gameplay. Appearance of new story text is paired with an audio cue from the Dualshock speaker, which was a smart idea, but at times trying to read the text while completing a tricky puzzle became too much. There were a few lines throughout the game that I just never saw as a result.

That is, except for one area. There is one floor of the game that simulates the inner workings of a program, showing code, visual distortions, and occasional vertical hold glitches. Paired with it being one of the more challenging levels in the game, it became an eyesore to look at, resulting in a physical headache that required me to turn the game off for a bit and recuperate from before returning to finally complete it. In a game that I would hold up as an example for others to look at when designing their own, this one level was a glaring annoyance.

Klaus and K1 are animated wonderfully, and the sequence that played each time Klaus entered a portal never got old. The only other item worth noting is that throughout the game, I noticed some line artifacts pop up here and there. I don’t think these were intentional, as the code level I referred to was only one level and these appeared throughout the entire game, but I could be wrong. 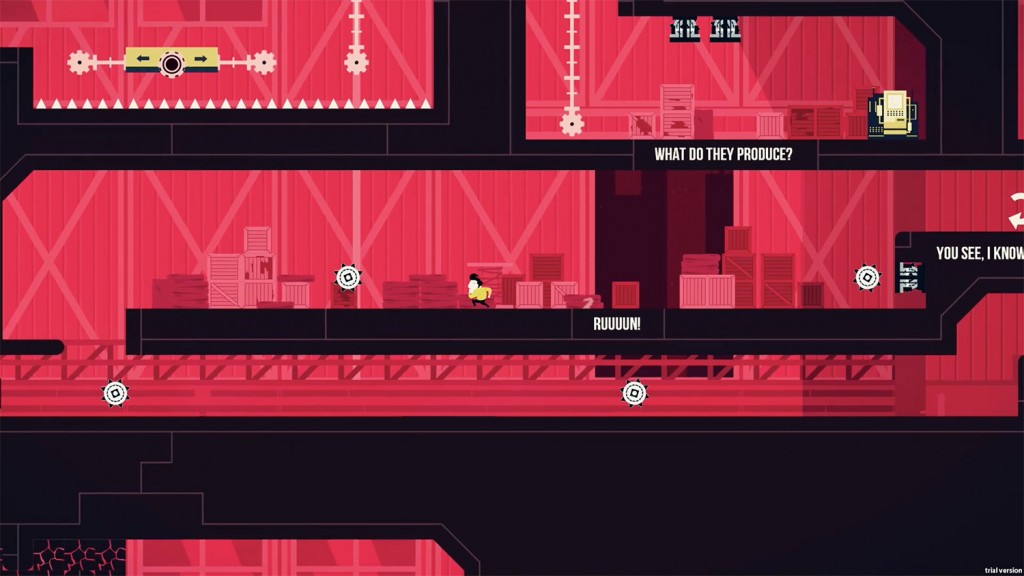 The music in KLAUS complements the wonderful aesthetic, and falls into the background most of the time as good video game music should. Becoming part of the background didn’t make it unnoticeable though, as I often found myself humming the tunes to myself long after stepping away from the game.

As mentioned earlier, audio cues denoting the appearance of new story text play through the Dualshock’s speaker, which further shows how much attention was paid to the console the game was being designed for.