The Geek Generation had the privilege of attending a Q&A for The Pete Holmes Show at New York Comic Con. In attendance for questions were comedian and host Pete Holmes, as well as show producers Nick Bernstein and Oren Brimer. 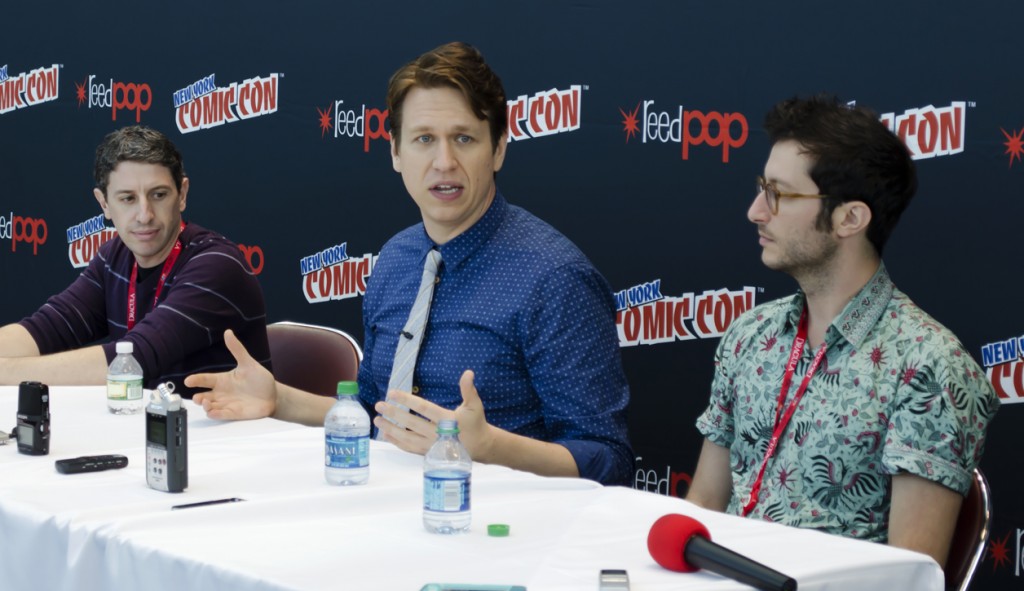 While audio of the Q&A was recorded, most of the questions coming in were too far from the microphone to be heard well, so you can read each question below and then hear the response given by the panel.

Q: Given that you’re best known for your podcast and long, intense interviews, translating what you do to a half-hour format… how’s that gonna work?

Q: Two years ago you were writing for two shows that got canceled and now you have a two-story banner of yourself over New York. It’s gotta be a little weird, right?

Q: With your background as a live performer, as well as your podcast, is there anything you’ve been wanting to do for awhile that you didn’t really have the opportunity to do until now?

Q: What’s the writing process been like so far?

Q: You’re the latest guy to make the move from podcast to television, like Scott Aukerman and Marc Maron. How do you think you would have made it to this point without the podcast?

Q: Who’s your target audience? Are you going to target gamers and comic book nerds and have special guests that represent the community?

Q from The Geek Generation host Rob Logan: First of all, I love the podcast, and you say it to people all the time, but you are the absolute best and I’m so happy that you have this opportunity. Also, in regards to the show, how often will Chelsea {Peretti} be on?

Q: What was your inspiration that made you want to be a comedian in the first place?

Q: What was your favorite late night show aside from Johnny Carson and what did you watch to get ready for this show?

Q: Have you received any advice from the other late night hosts?

Q: Aside from the Nolan Batman, are you going to be parodying any other versions of the character?

Q: When are you gonna push Conan out and take the big chair?

Q: During the sneak preview, one thing that fans will probably be excited to see is that T.J. Miller made an appearance. Was it important for you to bring that particular relationship to the screen?

Q: What comic books are you reading?

Q: You mentioned the monologue and guests… are there any other traditional late night elements you’ll include in the show?

Q: Should the show be a success, would you ever consider making it an hour-long show?

Q: Was there anything specifically that you wanted to do this season that you couldn’t fit in and are planning for next season?