2 min read
Add comment
FacebookTwitterRedditPinterestEmail
Paramount Pictures has announced that Tom Cruise has signed-on to star and produce a 5th installment in the Mission: Impossible franchise. 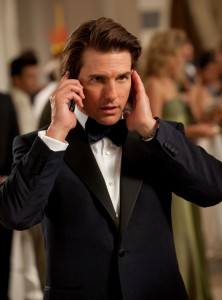 Paramount Pictures and Skydance Productions has announced that Tom Cruise has signed-on to star and produce a 5th installment in the Mission: Impossible franchise. The actor will reprise the role of Ethan Hunt, who was first introduced to moviegoers in 1996.

The project is expected to announce a writer and also a director shortly and will be developed by Cruise, Paramount and J.J. Abrams’ Bad Robot, who served as producers on previous films in the hit series. Skydance Productions, who served as co-financers and executive producers of the last installment will work closely with the team in the development and production process.

“We are thrilled to be partnering with Tom on ‘Mission:Impossible’ once again,” said Paramount Pictures President and CEO Brad Grey. “The last installment of the Mission series was the biggest in the life of this franchise. Tom has been at the heart of its success and we look forward to his great talent, and the continued global appeal for another Mission, to drive fans around the world to the next chapter of this series.”

The 4th installment in the globally successful franchise Mission: Impossible: Ghost Protocol, earned nearly $700M around the world and became Cruise’s highest grossing film to date in his storied career.

The Mission: Impossible franchise has earned over $2B at the worldwide box office, making it one of the most successful franchises in movie history.

Katie hadn't seen Top Gun, but now she has. Hear her thoughts in this episode.